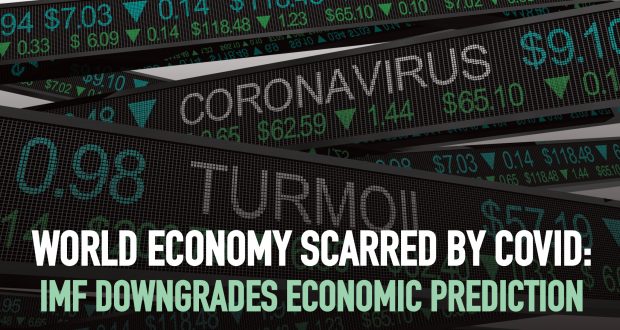 Covid-19 has hit the world economy even worse than expected, according to a report from the International Monetary Fund (IMF) released this month. In countries where Covid-19 is relatively under control, economic recovery is proving slower than expected. Capitalists are not investing, and are reconfiguring their supply chains so that another shock like this doesn’t hit them so hard. Workers are saving their money against an uncertain future.

In other countries the virus is still out of control, usually due to haste on the part of the wealthy to get everyone back to work and making profits again. But it seems that on top of being anti-social and callous, these representatives of the ruling class have shot themselves in the foot, with renewed outbreaks necessitating a longer lock-down, with even heavier blows to their profits.

Early in the lock-down, production and supply from China and other countries dried up. This supply shock is compounded by a demand shock: in spite of the long queues that have attended the reopening of retail in some countries, workers’ spending has performed a nose-dive. The result will be “scarring” — persistent damage to supply, ruling out a quick and easy bounce-back from the crisis. A recent rebound in financial market sentiment appears to be disconnected from the reality of disaster in the real economy.

The effect on workers’ livelihoods is already colossal. According to the International Labour Organisation, the loss in work hours was equivalent to 130 million full-time jobs between Quarter 4 of 2019 and Quarter 1 of 2020. The IMF predicts that a decline in Quarter 2 will exceed 300 million.

80% of workers in the world have already been adversely affected, and 70% of schoolchildren have lost out on education. This impact is uneven: women and low-paid workers are suffering worse effects. Workers in the informal economy are devastated. This is particularly the case in the neo-colonial world, aka “emerging markets” or the “developing world”, which have suffered the worst economic decline since 1960.

Massive government intervention is the only thing that has kept this show on the road. Fiscal measures amounting to $11 trillion have to date been announced worldwide — not in the first instance to bail out workers, but to bail out big business and banks. Roughly half of this figure consists of additional spending and foregone revenue, and the other half consists of liquidity supports, i.e. creating money and giving it to banks.

The IMF’s last forecast, in April, predicted that world growth would contract by 3%, which it described, in what must be the most-used word of 2020, as “unprecedented.” This report revises that downward to 5%.

In the graphs that accompany the report, entire columns are dominated by the minus signs. Downward revision of predictions is the rule. A decline of 8% is projected in the advanced capitalist countries as a whole — and the UK, France, Italy and Spain will all decline by over 10%. Out of the countries for which the report gives specific forecasts, only in one specific case, that of China, is growth on the cards for 2020 — but that only at 1%, quite shockingly low for China.

The predictions in the IMF report are not quite as severe as those of an OECD report earlier this month. The World Bank, on the other hand, predicts the fourth-deepest recession of the past 150 years — exceeded only by two world wars and the Great Depression. Its best-case scenario still has a global fall of GDP of 4% this year — twice as bad as that of 2009.

Role of the IMF

After the 2007–2008 economic crash, IMF forecasts systematically painted a rosier picture than what actually transpired. Downgrading of previous predictions became the rule. Capitalists pay close attention to these reports, which inform their investment decisions. Therefore, the IMF has an incentive to paint the most positive picture.

It is galling to read the IMF calling for better funding of health systems and adequate stockpiles of protective equipment. For decades the IMF has been the enforcer of neoliberal orthodoxy, demanding the absolute gutting of the social sphere, including health services, in country after country.

For the IMF as well as for the ruling class as a whole, free-market dogma has taken a back-seat in the face of a real crisis, which has necessitated public spending and intervention they would not have previously imagined. But this dogma is still alive: for example, the report calls on governments to tackle “labour market rigidities”, i.e. workers’ rights, pay, pensions and conditions, to facilitate worker reallocation from sectors that will emerge smaller from the pandemic.

Economic crisis was on the cards for 2020, pandemic or no pandemic, with globalization thrown into reverse, the US-China trade war and a “new Cold War”; ecological destruction; debt and bubbles; the unpredictable impact of technology. It was this unsteady structure that the wrecking ball of Covid-19 struck. Since its impact, other cracks have been torn open in the edifice, such as tensions between the oil-producing countries reaching new heights.

The additional massive challenges for the poorer neo-colonial countries — larger informal sectors, poor infrastructure, scarce food & medicine — are met in the IMF report with vague platitudes to the effect that “external support and strong multinational cooperation” are necessary. When it gets more specific, it calls for “debt relief, grants, and concessional financing from the international community.” Predictably, even in the face of this terrible disaster, the IMF’s take on debt in the neocolonial world is essentially “go a little easier on them for a while.”

This is in keeping with the general tone of the report. Truly colossal challenges are described, horrendous human suffering is predicted, and then vague and modest remedies are suggested. Even many of these modest remedies are simply not practical on the basis of capitalism. Without a radical redistribution of wealth, it is impossible to see how these issues can really be tackled.

After the 2007–2008 crash, austerity inflicted huge suffering on people but restored profitability for the bourgeoisie. The system restored itself, at the cost of putting the working class on rations for years, tearing at the fabric of society and massive political instability. This time, not only is it difficult to see how widespread austerity can be implemented due to the massive opposition it would arouse, it seems that even hardened neoliberal dogmatists can see that, if applied in the short term, it would make the economic situation worse from their point of view.

Therefore, the broad thrust of the report’s recommendations is toward a policy of public investment and social spending rather than austerity in the short term.

This suggests that there could be a period of Keynesian economic measures pursued by the ruling class.

The report even envisages the possibility of productivity gains on this basis; existing capital will be destroyed by the crisis and in its place, “accelerated digitalisation” and a “switch to renewables” could be feasible. In other words, the only optimistic part of the report is when it envisages a future built on the economic ashes and ruins left behind by this crisis — anything but a “just transition” that protects workers’ livelihoods.

But in the IMF report, these calls are qualified and hedged in with so many ifs and buts that it calls into question the ability of the system to deliver such a policy. The bourgeois strategists must feel like they’re at a crossroads. The crude “medicine” of austerity would kill the patient in short order, so stimulus must be applied, at least for the present. But there are dangers lurking down that road. First, the neoliberal orthodoxy has been hammered deep into the psychology of the ruling class since the 1970s and cannot be thrown out the window overnight. There remains a deep caution and a prejudice against social spending and public investment. More importantly, the “fiscal space” for such measures is tight, from the point of view of the bourgeoisie who will not tolerate significant impositions on their wealth and power. Finally, the ruling class must be worried that any measures that are too “generous” from their point of view will create higher expectations on the part of workers, and spur explosions of class struggle.

In Chile last year a mass protest was dubbed “the funeral march of neo-liberalism.” Late last year in Britain when it appeared that the left-reformist Corbyn challenge might be successful in the elections, the Financial Times noted with alarm that “The Thatcher Revolution is coming under threat” and that “Nationalisation has ceased to be a dirty word in British politics.”

Massive cross-community protests against poverty and inequality rocked Lebanon last year, and as soon as the lockdown was lifted in early June the protests resumed at once. This underlines the point that the massive protests of recent years have not gone away. While governing parties in many countries have seen a boost in support because of an instinct to “put politics to one side” and stick together in times of crisis, elsewhere the mishandling of the crisis has led to the authority of governments being shaken. This is most clear in the case of Trump in the United States, where it is a serious factor in the massive uprising against police brutality and systemic racism.

January’s IMF report identified “intensifying social unrest” as one of several challenges for the system in 2020. This was in recognition of the fact that movements from Chile to Hong Kong and from Lebanon to France had shaken the world in the year or two previous. The more recent June report tersely acknowledges “widespread social unrest” among a list of other “downside risks” to the world economy.

This “unrest” — protest movements, uprisings and strikes — fundamentally reflects the inability of the capitalist system to deliver a secure and prosperous life for people, and the movements of recent years demonstrate that this is the case on every continent. But this “unrest” is more than an economic challenge. It holds the potential to mount a global political challenge that could overturn the capitalist system itself. As the crisis outlined in this report unfolds, growing layers of people will see the need for a socialist alternative which, by fundamentally redistributing wealth and power, could harness the vast resources that exist in order to solve these problems