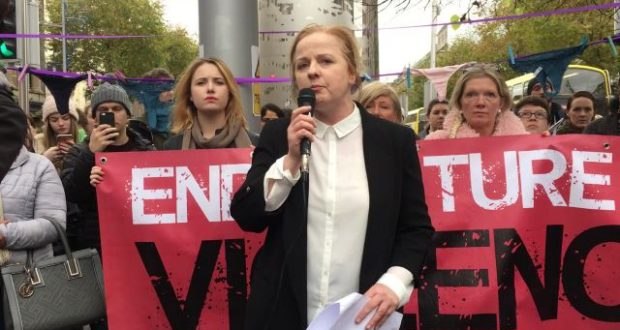 A unique & radical voice- Ruth Coppinger for the Seanad

Ruth Coppinger is a voice for change.
As a member of Dáil Éireann from 2014 to 2020, she advanced the real interests of working people, and particularly of women, in the Dáil — she will do the same in the Seanad.
Establishment parties and some independents have handed housing over to bankers, big developers and vulture funds which prioritise profit over people’s needs. They have been indifferent to the health crisis, undervaluing and not retaining skilled health professionals. They have made life more precarious for workers and pensioners. They have tried to put a brake on social progress.
Many have noted how the Seanad has been used by some to maintain discrimination, inequality and backward ideas.
The Seanad should be reflective of the positive changes that have taken place in Irish society, not a bastion for the status quo or a platform for those who want to take us back to the past.
Ruth would be a voice for social progress and is best placed to challenge those senators.
For workers, women & the planet

– An end to two-tier pay and precarious contracts for graduates and throughout the public sector;
– Declaration of a housing emergency: Immediate action using state lands and resources to end the housing and rent crisis;
– A separation of church and state — autonomy of women over their bodies and lives and full LGBTQI equality;
– Action, education and increased resources to tackle gender- based violence;
– Radical measures on the climate catastrophe, such as extending and making public transport free, keeping fossils fuels in the ground and banning fracked gas.
A socialist voice…
Ruth is a socialist and a member of the Socialist Party. Economic inequality is unprecedented as production for profit devours our share of wages, public services, human rights and the future of the planet. In Ireland, just 17 billionaires now have €41 billion in wealth. If these problems are to be resolved, the key economic resources should be publicly owned and democratically used for social need not private profit.
About Ruth Coppinger
Ruth Coppinger has a BA degree from UCD and a H.Dip in Ed from NUI Maynooth. She is a secondary teacher and a former ASTI branch secretary. Ruth has an unrivaled record of fighting for and delivering change:
– A driving force for Repeal and, through her input to the Oireachtas Committee, winning legislation that gave women the ultimate say;
– Highlighted gender violence and victim blaming like nobody else;
– Worked with families impacted by homelessness. Wrote a ‘minority report’ on the Oireachtas Housing Committee advocating mass home-building on public lands:
– Supported striking nurses and midwives, teachers and lecturers, ambulance paramedics and retail workers;
– Moved the Bill that led to the ban on fur farming in Ireland and favours ban on hare coursing and greyhound racing.
– Proposed the Objective Sex Education Bill, which has led to massive reform being proposed;
– Worked with parents and professionals to establish autism-specific education in Dublin 15;
– Demands the reintroduction of state pension to 65; lfavours an end to the marginalising of History and Geography in the school curriculum.
Ruth makes a difference. She holds the establishment to account. Make your Seanad vote a meaningful one.
An Appeal From Joe Higgins- Former Socialist Party TD
“Ruth Coppinger has been a close ally and collaborator over my many decades as a socialist campaigner, Councillor,TD and MEP. If elected, she would use Seanad Éireann as a platform to continue the fight for total pay equality for all workers, for all unresolved issues of women’s rights, for affordable homes for low and middle income workers, and to champion the cause of the vulnerable and marginalised. PLEASE GIVE RUTH YOUR NUMBER 1 VOTE”
“Bhí Ruth Coppinger taobh liom mar comhghuaillí agus comhoibrí tríd na blíanta fada nuair a bhíos im Chomhairleoir, Teachta Dála agus Feisire Eorpach. Mar ball de Seanad Éireann, leanfadh sí ar aghaidh mar trodaí díograiseach do cothromaiocht pá do gach oibrí, do chearta na mban, do tithiocht ar phraghas réasúnta do oibrithe ar íseal agus meán phá, agus do dhaoine imeallaithe. LE BHÚR dTOIL, VóTÁIL 1, RUTH COPPINGER”
2020-02-20
Socialist Party