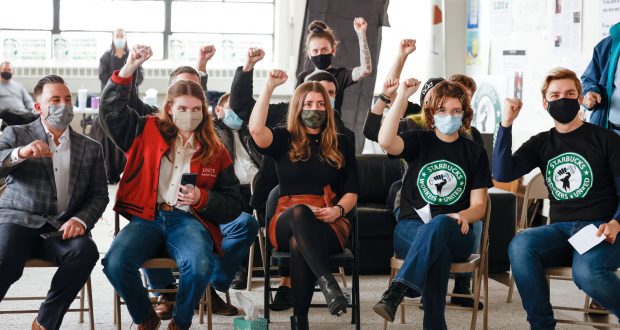 By Jesse Shussett, Socialist Alternative (our sister organisation in the United States)

Less than a month after winning their union, Starbucks workers in Buffalo, NY walked out demanding safe working conditions amid the Omicron surge. They were on strike for five days with the core demand that the store be closed while their coworkers recovered from COVID and proper COVID safety protocols be put in place. While last week’s walkout does not yet appear to have produced concrete changes in store policy for the workers at the Elmwood store, it is a first step to be built upon and the inspiration being drawn from these workers is rippling across the country. During their five day strike it was announced that workers at stores in Ohio, Arizona, and Illinois have officially filed for union elections.

This all began in December, when workers won union status at one location in Buffalo with 19-8 in favor, and another with 12-8. A third location is continuing to fight for unionization with a current ballot count of 15-9 in favor, but multiple challenges from both Workers United and SEIU as well as Starbucks hold them back from an official call.

While the Buffalo vote only represents about 100 employees between three stores, the notoriously anti-union executives at Starbucks are deeply afraid of the courageous example of the Buffalo workers spreading elsewhere. That’s why they flooded the city with top executives, including Schultz himself, to try to convince them not to vote “yes.” They claimed that, “if a significant portion of our employees were to become unionized, our labor costs could increase and our business could be negatively affected by other requirements and expectations that could increase our costs, change our employee culture, decrease our flexibility and disrupt our business.”

This is a classic union-busting tactic, one filled with twisted truths. Sure, the costs of the company would increase – because the workers would have a higher ground on which to fight for fairer wages and benefits! Ultimately, the only people this will hurt are the executives making millions off of the labor of the baristas they employ. Let’s be honest, better pay and protections can only serve to strengthen the work environment. The fact that big corporations like Starbucks fight back against unionization efforts they way they do because they are so aware of the power that these workers have as the source of all profits.

Starbucks also put the following forward in their filing: “Our responses to any union organizing efforts could negatively impact how our brand is perceived and have adverse effects on our business, including on our financial results.”

Starbucks likes to brand themselves as a progressive company with “woke policies” but fighting vehemently to prevent worker organizing has begun to crack that facade. What the company fails to realize is that they are doing this to themselves! We are in the midst of a tremendous wave of labor struggle, from John Deere to the ongoing struggle of teachers for safe reopenings. If Striketober and Strikesviging were any indication, workers are undeniably discovering their collective power and the ways that they can use it to make real gains.

Starbucks workers won the power to vote as individual stores rather than as a district, which assisted them in reaching the majority vote needed to succeed in the unionization drive. This unto itself is a small victory, one that the NLRB has not previously granted.

However, this segmented approach creates limitations to organizing, as it isolates locations from each other even when they’re in the same city, and in some cases mere blocks from each other. It allows the workers to get the votes needed for unionization efforts, but also makes communicating between the stores more difficult. This will require the union to actively  work to connect different stores. Taking on a corporate behemoth like Starbucks requires that all workers across Buffalo and ultimately the country are organized into one union that’s able to exert the maximum pressure needed to win a strong contract with higher wages and safe working conditions.

As of now, workers in many more locations around the country including in Massachusetts, Washington, Arizona, Ohio, Illinois, and Tennessee are campaigning to unionize.  This is incredibly significant as the low-wage service sector has long proven difficult to organize. Only six percent of American workers in the private sector are currently in a union, so organizing the unorganized is an absolutely key task and these Starbucks workers are pointing the way forward for workers everywhere.

It is particularly notable and impressive that the majority of those leading the union drives are in their 20s and are proving themselves a force to be reckoned with. Recent polls have shown that unions are more popular than they’ve been in half a century, with 65% of people saying they approve of unions, and among people aged 18-34 that number is 77%!

Young people are radicalizing across the board in response to low wages, crushing student debt, and bleak job prospects. Recently we’ve also seen walkouts of students standing up against sexual violence and school systems that fail to protect them, tens of thousands of young people joining a march at COP26 in Glasgow, and record turnouts of both voters and volunteers from those between 18 and 35 in the recent win against the racist, right-wing recall attempt of Kshama Sawant in Seattle.

We have also seen Starbucks workers showing solidarity with the struggles of workers in other industries. Buffalo Starbucks worker Rachel Cohen told Socialist Alternative that they joined Mercy Hospital in their recent strikes for better working conditions, and they have been in touch with Amazon workers impacted by the recent deadly warehouse collapse in Illinois.

“We want to be able to impact and inspire others to take up these fights as well,” Cohen said to Socialist Alternative. “Me making more money doesn’t mean you’ll make less, this will help both of us.”

She also was clear that while the stores are all voting separately, the organizing units have been closely collaborating, not just in Buffalo but with the other locations fighting for union recognition.

Another member of the organizing committee also mentioned the massive number of unorganized workers in the service industry in the United States. There are over 12 million food service workers in the U.S. and that is just one corner of the vast service sector.  We are seeing more and more service workers stand up and fight back against rotten bosses that only see profits, not the people impacted by it. The fact is that the COVID pandemic has laid bare the extensive shortcomings and clear decay of capitalism, including the realities of the way workers are treated – even when they are labeled as “essential.”

Workers often don’t stay in jobs for more than 6-8 months before becoming fed up with the poor working conditions and the exploitation they face. With no outlet to fight back and no path forward, workers quit and move to the next job. While it may provide a short-term morale boost for them and other workers, it ultimately serves as a barrier for true organizing and harnessing the power of workers. It is critical that workers see poor working conditions as something to fight and improve upon rather than run away from.

It will require a massive mobilization to accomplish unionizing even a majority of the 15,251 locations of Starbucks, with very pointed efforts of workers both within Starbucks and beyond. The ruling class is hyper-aware of the ripple effect that a successful effort across Starbucks would have in fast food, the entire service sector, and beyond, and will try to quash it by any means. We will need militant strategies and the collaboration of stores across cities and regions to win concessions, as well as mobilization from others in the industry in solidarity. The fightback against the union-busting efforts of Starbucks needs to be broad and have a strong set of demands in order to develop into a force to win real gains for the workers.

This November will be the ten-year anniversary of 100 McDonald’s workers in New York City walking out to demand $15/hr and a union. Unfortunately, despite tens of millions of dollars spent over much of the last decade by unions such as SEIU, no unions have been won at the main fast food mega corporations. This has largely been due to these union’s existing leaderships’ failed approach of focusing on public pressure campaigns and appealing to politicians, as opposed to a class struggle approach and militant rank-and-file organizing. The Starbucks workers in Buffalo have shown that unions can be won in fast food if you organize around clear demands and take up unapologetic, fighting tactics. Going forward, the major service industry unions such as SEIU, UNITE HERE, and UFCW, should put their full resources behind this winning approach.

Socialist Alternative stands unequivocally with Starbucks workers who are at the forefront of what can become a breakthrough in the labor movement. Winning will require solidarity between store locations and amongst other sections of the service sector – just as an injury to one is an injury to all, a win for one can lead to a win for all!

Members of the Starbucks union will need to continue to fight beyond gaining unionization. In many ways, winning a first contract is even more challenging and will require putting up a determined fight.

There has never been a better or more exciting time for service workers to be fighting these battles. With the ongoing Great Resignation and labor shortage, workers are in a strong position to use their collective power to win gains not only for themselves, but ultimately setting the groundwork for others and creating blueprints to follow. Solidarity to Starbucks Workers United! Solidarity to all service workers! 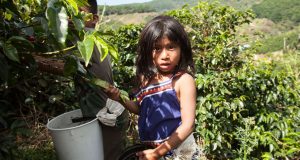