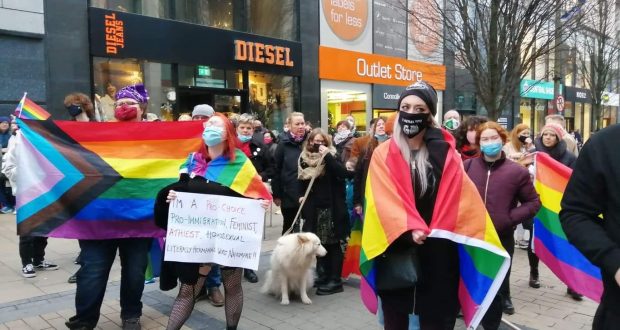 A successful counter-protest to the far-right was organised in Limerick on Saturday 18 December. About a hundred people, mainly young people, members of the LGBTQ+ community and Socialist Party members gathered to face down Hermann Kelly’s Irish ‘Freedom’ Party (IFP) and his 20 or so bused-in supporters, five of whom were actually from Limerick.

The IFP, like all far-right parties in Ireland, have been attempting to manipulate people’s frustrations at Covid-19 restrictions and the Government’s woeful response to the pandemic. Preying on the insecurity and confusion thrown up by the pandemic, the far-right have been exploiting any hearing they get online through various channels disguised as anti-lockdown protests to push their racist, homophobic, sexist, transphobic agenda. They have also been travelling around the country to try and win support for their disgusting and reactionary ideas.

But we were having none of it! The counter-protest was called by the Limerick Against Fascism group which has a big following on Facebook and Instagram, and it quickly gained traction amongst the LGBTQ+ community and young people who have been particularly targeted by Hermann Kelly and the IFP.

At the start of the pandemic Kelly and the IFP, along with Justin Barrett of the National Party, were instrumental in whipping up vicious homophobic attacks on the Green Party minister Roderic O’Gorman because of his sexuality. A protest targeting O’Gorman heard extremely inflammatory rhetoric used against the LGBTQ+ community, as well as featuring a banner with a noose. It’s worth noting that on that day there was also a violent attack on an anti-fascist counter-protester, which a National Party member has since been found guilty of and sentenced to three years in prison.

Another speaker at yesterday’s event in Limerick was Adare GP Dr Pat Morrissey. Pat Morrissey has spoken at many anti-lockdown rallies and has refused to administer the Covid-19 vaccines to his patients. Morrissey, however, is a doctor who doesn’t care much for public health or the funding of public health. When he served as Chair of the Shannondoc GP service in the Midwest he supported the closure of the out-of-hours services in Ennistymon, Kilrush, and Kilkee.

The Midwest is an area of the country that has been devastated by health cuts from successive governments and consistently has the highest number of patients waiting on trolleys in A&E. Emphasising the fact that the far-right offer no solutions to the various crises working-class people face, the actions of Morrissey have actively contributed to the already considerable overcrowding in University Hospital Limerick, as well as forcing people in West Clare to travel significant distances to access healthcare.

Hermann Kelly himself did not get to speak in Limerick yesterday. The rally was stopped by the Gardaí after a supporter of the IFP was triggered by the sight of the Pride flag on Limerick’s Richard Harris statue and attempted to tear it out of a counter-protester’s hand, shouting homophobic slurs and issuing death threats. The Gardaí stepped in to protect Kelly and his bunch of thugs before they were escorted by the Gardaí away from Limerick’s main shopping street while running the gauntlet of chants such as “Nazi scum off our streets”, “fascists not welcome”, and “whose streets, our streets”.

If the far-right want to try and organise in Limerick, they now know that they will have to contend with a growing movement which stands in the proud anti-fascist and socialist working-class tradition of the city. When working-class people stand united, they can overcome anything. 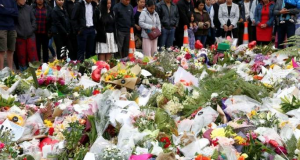 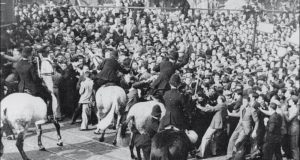 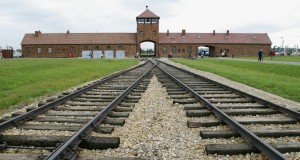