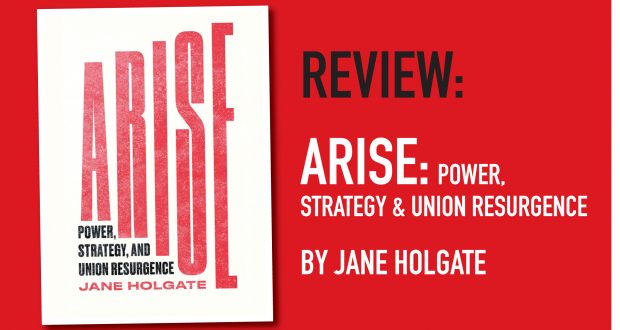 While being a historical and contemporary study of rising and falling fortunes of the British trade union movement, there is much in this book of interest to activists in Ireland who have witnessed a similar overall picture of decline in union density and all too frequent workplace defeats over the last four decades.

In trying to offer a perspective for those sections of the 21st century workforce often viewed as ‘hard to organise’, such as gig workers, part-time workers and also non-precarious workers in new sectors tech and services, a reference back to the late 19th century is an absolute requirement. The obstacles to organising workers then were as immense as today, if not more so.

Irish readers will be familiar with the particular role of Connolly and Larkin in bringing what was termed at the time as ‘new unionism’ to Ireland. This was the organising of the masses of unskilled and semi-skilled workers which represented a break from the tradition of craft unionism. Holgate goes into some detail about the seminal ‘match girls strike’ and dock strikes in London, where these methods were pioneered. In both instances you had thousands of migrant workers with zero legal protections, the emergence of organic leaders from the ranks and militantly executed strike campaigns that left a lasting legacy of organisation.

The main purpose of the book is a review of the ‘turn to organising’ undertaken by the British trade union movement some 20 years ago. The defeats suffered in the 1980s saw most of the trade union leadership in Britain adopt a defensive posture, termed ‘new realism’, which concluded that militant struggle was not possible in the economic context of higher unemployment and a raft of anti-trade union laws introduced by the Thatcher government. The defeat of the miners and print workers in the mid-eighties bolstered the hold of this retreat.

The strategy of the leadership was to wholly embrace a ‘servicing’ model of trade unionism, effectively treating their existing members as passive consumers with a focus on individual grievances. This was combined with ‘in-fill’ recruiting of non-members in already unionised workplaces, and in the few instances where employers were receptive, a form of social partnership. All of this was coupled with a hope for the eventual return of a Labour Party government.

None of the above, including the return of Labour to power under Blair, arrested the decline of trade union membership. The existential threat posed to the movement if they did not augment their shrinking base in disappearing older industries by breaking into new non-unionised workplaces became impossible to ignore, hence the ‘turn to organising’ and the creation of organising academies and departments.

One reform Blair did introduce was a system for mandatory trade union recognition if a majority of employees in a firm voted for a union, something still denied in Ireland. The reform did provide a clear path for a spurt of successful recognition campaigns but ran its course after several years.

The most valuable part of the book is picking apart why the two decades-long turn to organising has been a mixed bag, to say the least, and while it has slowed the decline of the movement and permitted some unions to grow again, it has no way near restored the movement to its previous heights. The fundamental deficiency is that most of the efforts have not amounted to true organising but rather recruitment of members which is not the same thing.

The case studies of USDAW (retail) and the RMT (rail) is salutary. Both achieved significant membership growth on the back of recruitment campaigns with their own distinct features. USDAW operated a form of social partnership with the big four retailers. While their activists have been permitted to recruit thousands of their colleagues every year, the increased density has not been translated into a struggle to improve pay levels, which are not markedly better than for USDAW members in other firms where there is no recognition.

RMT by contrast did not buy into the model of having separate and distinct organising units, but rather grew its membership on the back of a succession of successful militantly fought pay campaigns under the Bob Crow leadership. The success of the RMT on recruitment and improved pay and conditions and saving jobs stands out from all the other examples in the book, including ostensibly left-led unions like PCS.

Holgate concludes with appeals to the trade union leaders to adopt a better approach with correct calls for political education of the membership and an embracing of the campaigning spirit of the school student climate movement, BLM and #metoo, so that the union movement speaks to the next generation and harnesses their evident fighting potential.

While making this appeal she does not fully face up the struggle that has to be waged by rank and file activists to set them on a different course. The reality is that the sorry state the movement got into in large measure arose when trade union officialdom engaged in a power grab from the shop steward layer that populated the workplaces in the 1960s and 1970s.

The revival of the trade union movement in the 21st century will not happen on the basis of the controlled top down recruitment campaigns that do not build the power that enables workers to fight for real improvements in pay and working conditions.