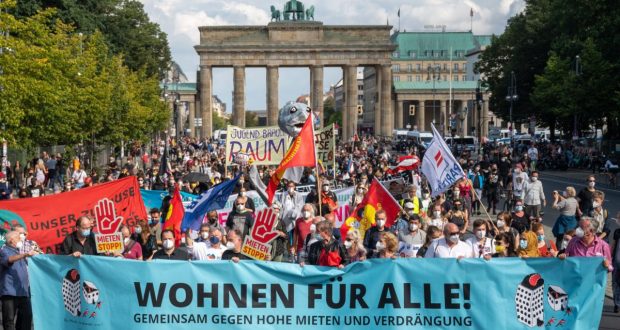 On Sunday, 26 September – coinciding with Germany’s general election – 56.4% of Berliners (a figure that would very likely be higher were it not for restrictive citizenship laws) voted to demand the properties of the major corporate landlords be taken into public ownership and used for public housing.  This is estimated to be a total of 240,000 housing units; however, it is likely to be an even greater amount, as who owns apartment buildings is often hidden behind a Byzantine web of shell corporations and money laundering operations.

This is a city in which rents have risen as much as 146% in some areas over the last decade, and where over 200,000 public housing units have been sold off since the 1990s. Vulture funds in Berlin have spent €42 billion buying up housing stock since 2007 – more than Paris and London combined. Hence this is a real victory for working-class people, with lessons for fighting the housing crisis in Ireland.

The ‘Deutsche Wohnen & Co Enteignen’ [Expropriate Deutsche Wohnen & Co] campaign was started two years ago. Despite the difficulties brought about by lockdowns and the COVID-19 pandemic, it managed to cohere an activist network of 2,000 people across the neighbourhoods of Berlin and gathered 350,000 signatures between January and June 2021 to get the vote on the ballot for September. These efforts were boosted by the mass outrage which developed in April, with tens of thousands on the streets after the Constitutional Court overruled the rent cap introduced last year – on the basis of laws dating back to the imperial rule of the House of Hohenzollern. The 1918 November Revolution that overthrew the Kaiser apparently passed the court by.

Although the vote is not legally binding, the strength of the movement and the size of the vote in favour of expropriation has put an amount of pressure even on political parties vociferously opposed to the campaign. Even those who made it evident they did not support expropriation, such as Social Democratic mayor-elect Franziska Giffey, rather than immediately shut down the demand, are trying to water down the demands and ‘study their constitutionality’ for a year.

Breaking with the rule of vultures

Such a large vote in favour of expropriation also signifies many working-class people breaking away from the neoliberal doctrine of the inviolability of capitalist private property. It is no longer accepted that private profit should supersede human necessities, and this is similarly a positive development. More and more, working-class people are seeing that resolving the housing crisis will require a serious struggle against the for-profit housing model. It will require a ‘Berlin-like struggle’ many times over to win public housing for all.

This would mean the expropriation without compensation of the major vulture funds like IRES REIT and Kennedy Wilson and the building of public homes on public land. This should be linked to the nationalisation of the major construction companies and banking system. This would be the starting point of a housing system run rationally based on human need rather than profit.

Sinn Féin, which last year received the lion’s share of votes from working-class people who wanted change, has failed to draw the necessary lessons from this movement. No sooner than the last ballots were counted did Sinn Féin housing spokesperson Eoin O’Broin say that “the solution here isn’t necessarily expropriation”.

If it were serious about fighting for public housing Sinn Féin would use its vast resources and public positions to build a working-class movement to challenge the rule of those profiteering from the housing crisis, including to demand the seizure of vulture fund assets.

Unfortunately, Sinn Féin is unwilling to build such a movement and accepts the limits of the capitalist market, the sacrosanct right to private profit, and therefore is not willing or able to take the necessary measures to resolve the housing crisis in Ireland. Instead, it sees its role as delivering “much larger volumes of affordable homes at a more cost-effective way.”

As the housing crisis deepens there are important lessons we can draw from the battle for public housing in other countries. The absence of affordable housing for working-class people is a global problem, inherent in the global system of capitalism. We need to organise now to fight for this basic human right and against the system that denies it. 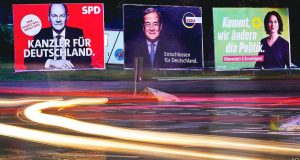