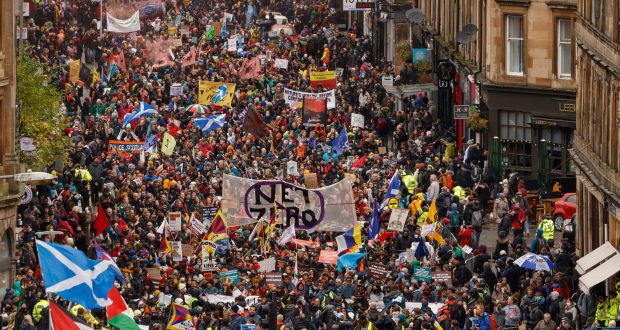 By Per Olsson, ISA Sweden

The COP26 climate summit in Glasgow is a “global greenwash festival and a failure”, said Greta Thunberg when she spoke at the “Fridays For Future” event in Glasgow on 5 November. That demonstration was followed the next day by a huge march for the climate that brought over 100,000 people onto the streets of Glasgow.

COP26 in Glasgow will go down in history for two completely opposite reasons. Firstly, it saw the stepping up of the greenwashing by the ruling elite to hide their totally inadequate promises and, above all, inadequate actions. Secondly, it was met by the amazing mobilization by those demanding real measures, in reality leading to a fresh start for the struggle to save the global climate, after the pause caused by the pandemic.

The largest delegation at the meeting with over 500 people accredited represented the fossil fuel industry. This fact alone confirms that COP26 was a festival of greenwashing. As the summit reached its concluding days, negotiations continued over the series of new pledges to limit emissions and temperature rise.

It was already clear as the talking continued that any proposals would anyway be very limited. Even so, unlike what happened after the 2015 Paris climate summit (COP 21), when many believed that serious action would result, most climate activists have no illusions that the participating governments will deliver on their promises.

The rapidly deepening climate crisis, and the struggle that has resulted, has created a new awareness, a growing realisation that it is the system that needs to change.

Before the climate summit, governments across the world submitted their new climate pledges. These Nationally Determined Contributions (NDCs) proved far from adequate to meet the target of a 1.5 degree rise in the global temperature. Scientists have pointed out that if governments continue what they are currently doing, a temperature increase of a devastating 2.7 degrees will happen by 2100.

These pledges have since been followed by new ones at the climate summit, prompting the International Energy Agency (IEA) to hope that the temperature increase can be limited to 1.8 degrees. But the IEA’s calculations are themselves guilty of greenwashing.

“We’ve run the numbers — the IEA scenario still leaves an enormous emissions gap in 2030” say researchers at Climate Analytics. They highlight the need to slash global emissions by nearly a half within a decade to keep 1.5 degrees Celsius within view.”

At the climate summit, governments have pledged to end deforestation by 2030, with Brazil’s President Jair Bolsonaro among the signatories. During his term as president, deforestation in the Amazon has set new dark records.

“There’s a very good reason Bolsonaro felt comfortable signing on to this new deal. It allows another decade of forest destruction and isn’t binding. Meanwhile the Amazon is already on the brink and can’t survive years more deforestation. Indigenous Peoples are calling for 80% of the Amazon to be protected by 2025, and they’re right, that’s what’s needed. The climate and the natural world can’t afford this deal”

COP26 reached an agreement to cut methane gas emissions by 30% by 2030, but the three biggest emitters — Russia, China and India — did not sign.

The major consumers and producers of coal refused to sign up to the COP26 deal to phase out its use by 2030. The US, Indian and Chinese governments have all refused to do so, while the Polish government, having first signed up, changed its mind in less than a day, saying that coal can only be phased out by 2049.

Ever since 2009, the world’s rich countries have pledged to assist poor countries with climate aid, which by 2020 would amount to $100 billion a year. That target has not been met; climate aid, which is both aid and loans and given on the rich countries’ terms, reached $80 billion in 2019. A drop in the ocean, governments’ fossil fuel subsidies are 74 times greater and equal to $11 million a minute!

But at COP26, this failure will be covered up with new empty promises. As Greta Thunberg expressed it:

Since the Paris climate summit in 2015, temperatures have risen faster than ever before and emissions increases this year could be the second largest in history. The world’s global energy mix is still the same as it was 10 years ago.

Children born in 2020 are likely to experience on average almost seven times as many heat waves, three times as many crop failures and twice as many uncontrolled fires compared to their grandparents, a recent research report by Save the Children and climate scientists at Vrije University in Brussels has warned.

As it is capitalism’s pursuit of profit and exploitation that drives the decisions made by the ruling elite, the world is headed ever closer to global catastrophe.

The changes that are necessary can only be achieved by widespread struggle from below, by the climate movement joining its forces with workers’ struggles and trade unions and preparing to fight using strikes and blockades.

Only such a movement would be powerful enough to end the inaction of the ruling elite, by taking power out of its hands and allowing for the implementation of alternative plans for sustainable production and distribution as part of a publicly owned and democratically planned economy. This would be genuine ‘system change, replacing capitalism with democratic socialism, allowing for the sustainable development of the world.