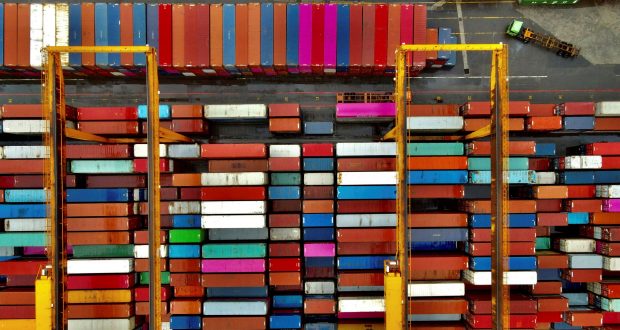 Over 100 container ships unable to unload in the Port of Los Angeles. Auto plants cutting production or closed because of a global shortage of microprocessor chips. A possible toilet paper shortage (again) and many goods may not be delivered to stores in time for Christmas. This is just some of the evidence of supply chain chaos that is denting the economic recovery in the U.S. along with the summer surge in COVID cases. In the third quarter, the U.S. economy only grew 0.5%, down from 1.6% in the second quarter. This represents the slowest growth during the recovery from the economic collapse of early 2020.

Nor do the container ship traffic jams seem likely to be easing anytime soon. The situation at the Ports of LA and Long Beach is actually getting worse despite the Biden administration’s announcement that the port would be open 24 hours a day which is unprecedented. The situation is very similar in Savannah, Georgia, the third biggest container port in the country.

Supply chain chaos is certainly not limited to the U.S. 77% of ports worldwide are experiencing abnormally long turnaround times. Ships are queuing in the English Channel and the North Sea waiting to unload in congested European ports. Germany’s manufacturing-centered economy is facing a “bottleneck recession” because its factories are short of plywood, copper, aluminium, plastics as well as lithium, cobalt and nickel which are key to making the batteries in electric vehicles. In the Czech Republic, Skoda (part of Volkswagen) which accounts for 5% of the country’s GDP, has been forced to temporarily shut down production. A shortage of fuel has caused power outages in Northern China leading to factories shutting and lost production.

As International Socialist Alternative stated earlier this year, the predictions for a roaring recovery by capitalist institutions like the IMF were based on overly optimistic assumptions. Rather the current situation points to the underlying fragility of the recovery and the extremely unstable position for global capitalism.

In the U.S. it was confidently claimed by many economists that the labor shortage would sort itself out once extended unemployment benefits were ended during the summer forcing many back to work and once schools reopened for in person learning allowing parents, especially women, to return to work. But this is not what has happened. Many people are still understandably afraid to return to offices or service jobs when COVID is still widespread with tens of thousands of new cases reported each day.

However, an even bigger factor is what has become known as the “Great Resignation.” 4.3 million Americans quit their jobs in August, the highest “quit rate” ever recorded. And while most of those who quit have gone to another job, some have left the workforce altogether. It is clear that the Great Resignation is driven by massive dissatisfaction with working conditions. The working conditions in the trucking industry are particularly brutal and the pay is abysmal for most. The same factors are cited in Europe in explaining the difficulty in recruiting sufficient drivers.

In response to brutal overwork and pay being eroded by inflation, tens of thousands of unionized workers have gone out on strike in the U.S., Europe and beyond in what has been dubbed “Striketober.” Their confidence has been increased because they feel it will be very hard to replace them. But for the vast majority of workers in the U.S. who are not unionized they feel their best option is to tell the boss “to take this job and shove it.” Workers have found dramatic ways to resign including a Walmart worker who denounced management over the loudspeaker on her way out the door.

But while the labor shortage is a key factor, it is certainly not the only one. The pandemic and climate disasters have demonstrated the vulnerability of the vast, global “just in time” supply chain. One break in the chain can cause havoc. Only the most dramatic example was the blocking of a critical Suez Canal shipping lane in March by the massive container ship, the Ever Given .

This year a number of Chinese ports have closed due to COVID outbreaks as have textile factories in Vietnam which are a major supplier of clothes for the U.S. market. Drought affected the supply of water to semiconductor chip plants in Taiwan, the world’s main producer. These problems in turn have led companies to seek to stockpile goods as demand surged. This only placed more pressure on the strained supply chains.

On top of this, capitalism’s unplanned and chaotic nature has resulted in a shortage of shipping containers in some places while they pile up in others. This problem was identified many months ago but seems nowhere close to solution. Container costs have spiraled from $3,000 to $20,000. U.S. retail giants including Walmart, Target, Home Depot and Costco are now chartering their own ships to move goods to try to get around the obstacles.

U.S. Treasury Secretary Janet Yellen and Federal Reserve Chairman Jerome Powell have claimed that most of the supply side problems are temporary. But it is obvious that the labor shortage is not going away. Like a number of other issues in the world economy it began before the pandemic and has been greatly exacerbated by it. In fact the labor shortage is likely to be a longer term factor as the population ages in the advanced capitalist countries. The capitalists will seek to resolve this demographic problem through higher immigration and increased automation. However, the first fix is not politically feasible at the moment while the second will also take time and poses many challenges.

Another underlying factor undermining the global supply chain is the sharpening U.S./China conflict which is leading to a growing “decoupling” of the world’s two largest economies. This process was also underway well before the pandemic hit. In general, the new Cold War points to the breakup of one integrated global supply chain into regional supply chains centered on China, the U.S. and Germany. COVID and the bottlenecks have certainly reinforced this trend as governments seek to “reshore” production seen as crucial to “national security.”

Of course it is not possible to turn the clock back to more closed, self-sufficient national economies as modern production requires a range of inputs and raw materials that must be sourced from far afield. But, as we have insisted, the era of neoliberal globalization is at an end. This was characterized, among other things, by the lowering of barriers to the free movement of capital to an unprecedented degree. The result was that corporations could seek cost savings by extending the supply chain ever further. Now we see instead increased competition between imperialist powers and increasingly nationalist and protectionist economic policies.

Is this the Beginning of a Recession?

By themselves, the current supply chain problems, while enormously disruptive, will not lead to a deep global recession. This is because of the significant level of demand in wealthy countries spurred by massive government stimulus spending to prevent economic collapse during the early stages of the pandemic and savings made by those who worked from home. This has meant “bulging order books” for manufacturing firms across the world.

Nevertheless we clearly see a manufacturing slowdown in a number of countries at the moment, especially China, driven by supply chain problems. No matter how many orders you have you can’t produce if you don’t have the raw materials.

Furthermore, the supply chain chaos can exacerbate other factors which can indeed tip the economy over the edge. For example, the persistent supply chain problems have contributed to the biggest spike in over a decade in Europe and the U.S. In the U.S. prices are up 5.4% on an annualized basis according to official figures while in Europe the increase is 3.4%. These numbers actually underestimate what ordinary people are experiencing. A particular factor is the potential for fuel shortages to lead to a significant spike in prices over the winter. Aggravated fuel shortages can also affect production as well as the ability to heat homes as we have seen in northern China. And major climate events like the cold snap in the southern U.S. states last winter can have similar effects as outdated infrastructure buckles.

There is also a specific crisis facing the retail sector because of shortages of everything from toys to certain holiday delicacies. The holiday season is when retailers make a large part of their profits. This raises the prospect of a combination of price surges and reduced profits leading to layoffs, the dreaded “stagflation” that plagued capitalist economies in the 70s.

If inflation persists or worsens, the Fed and other central banks will be forced to intervene and raise interest rates. This is the classic anti-inflation “cooling mechanism” which makes borrowing more expensive and thereby discourages economic activity. In the current volatile environment, it could easily trigger a recession.

Capitalist commentators are increasingly concerned that the supply chain problems will last well into 2022, far longer than originally predicted. The longer this goes on and the more price shocks it causes, the more the pressure for central bank intervention will grow.

But as serious as the supply chain disruptions and inflationary pressure are, they are not the only threats to the economic recovery. There are massive looming corporate and sovereign debt crises as well as speculative bubbles whose bursting can have catastrophic consequences for the world financial system leading to sharp downturns in the real economy as in ‘08-’09. Only the latest example is the possible collapse of the Chinese real estate giant Evergrande which accumulated a staggering $300 billion in debt. This is actually just the tip of the iceberg in a real estate/construction sector that accounted for 29% of the Chinese economy and was a key part of its growth model. The total debt in this sector is on the order of $5 trillion.

Only a few months ago we were promised a massive, sustained economic recovery, even a repeat of the “Roaring 1920s.” But the cascading problems in the global supply chains clearly have the potential to contribute to a new phase of the economic and social crisis that was triggered by the pandemic. Capitalism’s chaotic and brutal nature and its complete inability to offer a secure or stable existence is increasingly exposed for hundreds of millions. This is why we are seeing a real shift in consciousness among working class people and an increased willingness to fight back. Socialists explain that the only way out of endless crisis is to bring the key sectors of the economy into public ownership and to integrate them into a global plan of production based on the needs of humanity, not the profits of a handful of billionaires.