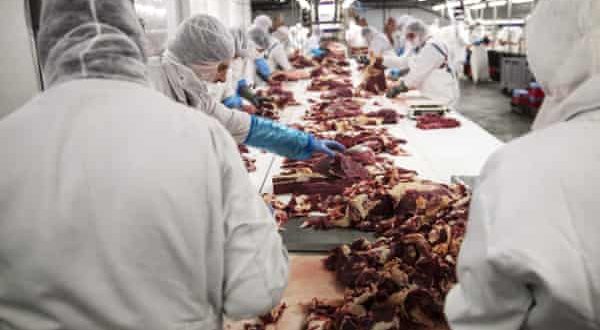 The shocking mistreatment of meat factory workers and the inhospitable conditions under which they live and work has once again been highlighted, this time in a recent Guardian expose. This is an industry worth €4 billion and one built on the super-exploitation of its workforce

These workers are paid just a little over the minimum wage, and then charged fees for things like renting overcrowded accommodation from the factory owner or for ‘bank processing’. This already insufficient wage becomes far less, pushing workers into poverty. They are unable to access any social welfare programmes, such as child support payments or medical cards due to the fact that they are paid through a Polish subsidiary and therefore pay no tax in Ireland.

They are often not even employees of the companies that run the factories and who make enormous profits from their labour. They are rather sub-contracted, meaning they are self-employed, or more accurately bogusly-self employed, workers who are paid only for the hours they work with no entitlement to statutory rights, such as holiday or sick pay. These are hard-won rights that workers have struggled for over the last century.

This phenomenon is increasingly prevalent, particularly with gig economy workers, who are paid a pittance and have no entitlements, this is then used to lower the rights and entitlements of all workers.

A sizable portion of meat factory workers are migrants and due to their more vulnerable position, their bosses tend to exploit them more easily, as the racism inherent in capitalist society allows them to get away with it. They know that by exploiting the most vulnerable, they are able to threaten these workers with homelessness or even deportation for those who are not from the EU. This allows them to treat the workers deplorably without fear of them speaking out.

The horrific working conditions in these factories was epitomised during the Covid crisis when they suffered multiple outbreaks. The virus spread quickly due to the overcrowded conditions and little attention paid to health and safety. The bosses would not forego even a scintilla of profit by implementing the most basic safety procedures and, as a result, many workers got sick, passed the disease onto friends and family and eventually this spread into the wider community.

The bosses of these companies have repeatedly shown scant regard for basic humanity in the name of profit-seeking. These tycoons, like Larry Goodman and Bert Allen, are multi-millionaires and have the ear of politicians because they supposedly “provide employment”. They use this influence to maintain lax regulation and standards in the industry.

Their profit-seeking also feeds into the crisis facing farmers, who last year organised a major protest in Dublin against the inadequate prices they get for their meat. Farmers who produce the meat and workers who package it for supermarkets do nearly all the work but get an ever-decreasing sliver of the profits. This causes expansion of production and unsustainable farming practices as small family farmers are forced to increase their herd to make enough money to survive.

We need to move to a system of sustainable food production, ensuring future generations access to quality produce. We need to end the horrendous cruelty towards animals that exists in both the food and agribusiness industries. This cannot be done under a profit-centred system, where those in control of the means of production would rather see workers come in sick and infect others than pay any sick pay. Unions need to urgently organise meat factory workers and not just view them as “members” of a trade union movement. Such organisation has been undertaken by Unite in the North.

We need to ensure food production, a vital industry for our society is not left in the hands of capitalists, particularly as we face uncertain times with the effects of climate change already here. As part of a democratic plan of food production, the giant meat conglomerates must be brought into public ownership, the big industrial farms broken up and sustainable agriculture moved to, which will help not only in fighting climate change but will also drastically improve the living and working conditions of those involved in the industry.