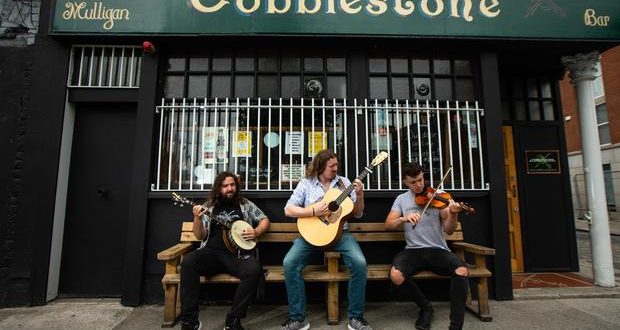 Dublin City Centre has been heading down a path of corporate take over for some years now. Historic, cultural, and creative spaces are continuously demolished and destroyed at the behest of landlords and private business.

These decisions are supported by An Bord Pleanála and The Dublin City Council (DCC). In the space of a year, between 2018-2019, Dublin said goodbye to many creative and music spaces, such as Hangar, District 8/Tivoli Theatre and The Bernard Shaw – all of which were replaced with new developments; mainly hotels or aparthotel. DCC has been routinely criticised for ignoring their promise to protect and enhance Dublin’s cultural infrastructure by bowing down to corporate interests.

It came to light this week that the lane way and old buildings surrounding Merchant’s Arch, will be destroyed and replaced by a four-story, over-basement hotel structure. The new development would also see the multiple small independent retailers replaced by a single boutique hotel and restaurant unit. Not only does the beloved area have protected structure status, but also objections were raised by An Taisce, and appeals were made by residents in Temple bar– nevertheless deciding bodies gave it the green light.

They argue that there will still be a walkway; however, it’s the hotelification of our city that is the problem. In addition to this, The Cobblestone pub in Smithfield is also facing the prospect of demolition. The plans are to build a 114-bed hotel on top of and around the “protected structure”. The Cobblestone is the main hub for the traditional Irish music community in Ireland. It is also a space used to hold events, teach the Irish language, as well as a place for musicians to develop their skills. If the Smithfield development goes ahead as planned, the backroom venue, the smoking area, and the rooms upstairs where music and language classes were held will be destroyed – leaving only the main bar which will be swallowed up by a 9-story hotel.

Locals and musicians fear that it will end up like the Tenters Pub structure in the Liberties and ultimately turn into a residential hotel bar. Those in favour of the plans help to manipulate it in a way that says ‘we won’t touch your protected structure really’. But the reality is, the developments are inappropriate in size next to historic and protected structures. From O’Rahilly house to the Irish Distillers Building, DCC and developers have gone ahead and broken promises, while completely ruining significant heritage buildings.

Both plans instantly faced huge levels of backlash online. People began to share information and petitions have also made plans to mobilise on the issue. At the time of writing, the petition for Merchants Arch has 45,000 signatures, and the Cobblestone has 18,000 with both numbers continuously growing. The demolition of these sites is the last straw for a lot of people. Any public space or service is rolled back on. We witnessed this this summer, when the public essentially had to beg the government to supply public toilets and bins. Ireland’s green spaces in the city are also lacking, and these issues further came to light throughout Covid when many people chose to gather outside in order to socialise safely.

Covid assisted in exacerbating many of the social problems in Dublin, and around the country.  At a time where homeless figures have risen for two consecutive months it was revealed that 4,500 new hotel rooms are expected to be available in Dublin over the next few years – with the bulk of them (2,000) due to be delivered this year. This will be a 50% increase in rooms delivered between 2018-2020. In addition to this, the homelessness figures have risen for the second consecutive month, indicating the future increase of homelessness later this year. Vulture funds and developers have bought up public land, huge swathes of new homes and have left a large cohort of apartments empty to keep rents artificially high. This means that they will not only price us out of our areas, they are changing these same areas to suit their financial interests while dismissing the real objections from the community.

We need to build a movement to challenge policies based on the interests of the property developers, landlords and vulture funds:

–          We need a city, not a corporate hub that has taken the heart, culture and life out of Dublin City. For major public investment in cultural venues for musicians, artists.

–          We need the building of public homes for all– not more hotels for profits. Slash and freeze rents at levels that are affordable—ban all evictions.

–          Break with the rule of the capitalist market and criminal logic of profiteering that is undermining our living standards, destroying our planet and sucking the life out of our cities.