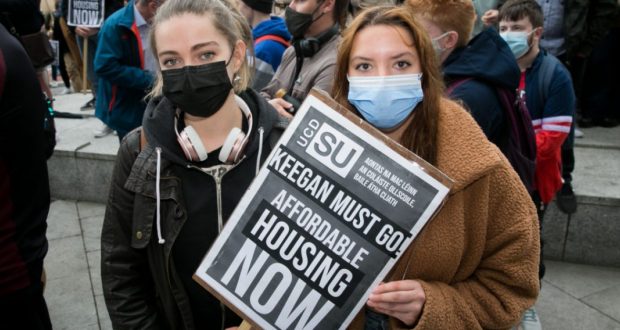 A snide email response by Owen Keegan to UCD Students Union has rightly drawn condemnation. The latter were rightly pointing out to Keegan the accommodation crisis for students in the city that is in no way being mitigated by totally unaffordable, so-called “purpose-built student accommodation” (PBSA).

While the utter lack of professionalism in his reply caused some genuine shock, it will come as no surprise to those of us who have worked in close proximity to him in Dublin City Council over the years.

Dedicated neo-liberals, Keegan above all, have been in the driving seat of DCC for years. On their watch a relentless economic cleansing of the city centre of working-class communities has been taking place in favour of hotels, build-to-rent accommodation and PBSA. In the suburbs they have consistently pushed for the majority privatisation of council-owned land and sites for housing projects.

In the case of PBSA, previous reports, including by the Irish Universities Association (IUA) reveal the real reason so many have appeared in recent years. It is well known to the heads of the third level institutions that PBSA is well beyond the reach of most students from low- and middle-income backgrounds. Pre-Covid it was estimated that only 20% of PBSA rooms were occupied by students from Ireland or the EU. Most of the occupancy was from a rich elite of international students whose families pay the massive five-figure fees for entry.

The IUA went so far as to describe these students as a form of foreign direct investment (FDI) that they rely upon to overcome their funding crisis. The Covid pandemic, however, has deprived them of this supposed FDI for two academic years and much of the PBSA has been repackaged as tourist accommodation.

In the DCC area there is enough land zoned for residential development to build tens of thousands of units, much of it owned by DCC itself or other state institutions. However, on Keegan’s watch the situation has continuously gotten worse. His total lack of empathy as a human being goes hand in hand with his neo-liberal approach. The reaction by UCD students, including their protest this week coupled with last Saturday’s protest in response to the proposed over-development of the sites around Merchants Arch and the Cobblestone, show that working-class and young people are not going to take this attitude lying down.