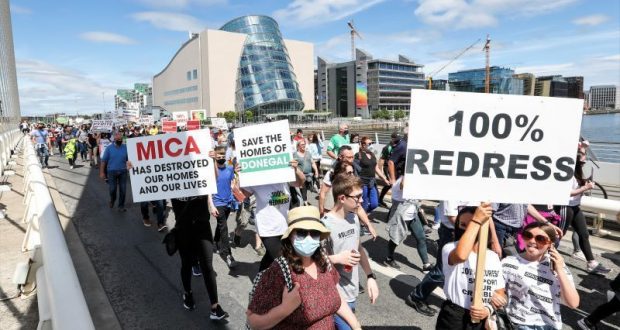 On Friday, 8 October, thousands took to the streets of Dublin once again to protest against the scandal surrounding mica. Ordinary working people from Donegal, Mayo, Sligo, and other counties impacted by the issue, made the trip in what was one of the largest protests seen in the state since the beginning of the pandemic, perhaps except for the last mica protest in June.

Mica is a type of naturally occurring mineral that, when found in building blocks, can absorb water, damaging the block’s structural integrity over time. The maximum amount of the mineral that can exist in a block for it to be safe is 1%. Many of the affected homes have seen blocks consisting of twenty times this or more. A block containing these levels of mica can be crumbled by hand after just a few years, with many comparing them to the cereal Weetabix. These defective blocks have been used in thousands of homes, as well as in schools and other buildings, affecting tens of thousands of people, leaving homes unsafe to live in.

This crisis was not inevitable, but rather the result of light-touch regulation and profiteering, a direct result of treating housing as a commodity to be profited off rather than a necessity for people to live. These blocks come from quarries that were trusted to regulate themselves, the need to generate profits incentivises companies to ignore regulations.

The current redress scheme offers people 90% of the cost of rebuilding, capped at €275,000. This means that homeowners need to pay tens of thousands of euro, not even including the cost to get on the scheme, which is also in the thousands, and other ancillary costs such as the cost of accommodation during rebuilding. All this for something that absolutely was not the fault of the homeowners. Most people obviously do not have this money just lying around. Victims are demanding 100% redress. This was rightly offered to people in Dublin affected by similar issues with pyrite and should be offered to those affected by mica.

The government has attempted to use divide and rule scare tactics, telling people that the tax-payer will have to pay for this in an effort to turn people against 100% redress. But this does not have to be the case. Decades of right-wing rule by Fine Gael and Fianna Fail, with help from groups like the Green Party and the Labour Party, has facilitated a construction industry better suited to the wild west. It is the insurance companies, the banks, the quarry owners, the construction companies who must be made to pay, not only for this but for other crises that are sure to come.

However, even 100% redress does not solve the root cause of this problem: the building of homes for profit, and not for people. We need the building of public homes that are eco-friendly and safe to live in.

Those major industries – construction, mining, banking and insurance – that privately profit from the housing crisis must be brought into democratic public ownership. We need a break with this criminal system of profiteering – the system of capitalism, and replace it with a democratic socialist society based on the best interests of people and the planet.