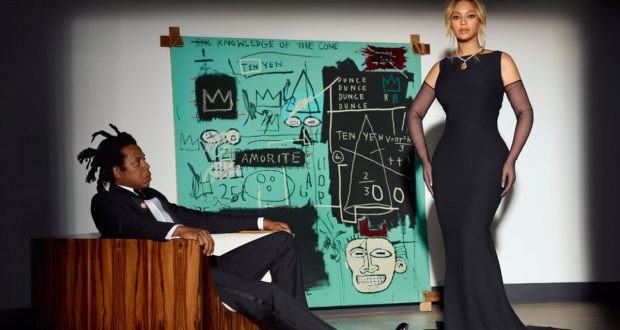 The story of a blood diamond: Basquiat, Beyoncé, Jay Z and Tiffany’s

Tiffany and Co., the famous jewellers, recently unveiled their newest advertisement starring Beyoncé and Jay Z, and it is the epitome of ‘woke capitalism’.

Beyonce is the first black woman, and the fourth person ever, to wear the 128.54 carat Tiffany Diamond, worth $33 million and made famous by Audrey Hepburn in the promotion of the movie Breakfast at Tiffany’s. Choosing a black couple to represent their brand is clearly a strategy to garner ‘woke’ points in the wake of the grassroots Black Lives Matter movement in the US and globally.

If we scratch the glossy ‘woke’ veneer, however, another story emerges. Many have come to see the Tiffany Diamond as a ‘blood diamond’, since it was mined in British colonial South Africa. The diamond was unearthed by predominantly black labourers at the Kimberley mine in the 1870s. These miners were mostly former tribesmen (no doubt children also) who were dispossessed of their land by white European capitalists. They were forced to either work for a pittance in extremely hazardous conditions and be subjected to vile abuse, or to face death by starvation as their means of subsistence was brutally confiscated.

The working arrangements at the mine were little better than slavery. In 1883-1884 alone, 600 workers lost their lives due to smallpox, exacerbated by poor sanitation. Black workers were segregated in compounds in a bid to prevent them from organising together for better conditions and pay. Workers were under 24/7 surveillance to ensure that they would not take any of the diamonds which they had risked their lives to mine. Those who attempted to organise a labour union were faced with the possibility of being denied access to food and water. This is the real legacy of the Tiffany Diamond.

Today, not much has changed for people of colour in South Africa or the US. The majority black population of South Africa are still beset by poverty and low incomes, and comprise the majority of the working class and poor. Meanwhile, white South Africans comprise most of the wealthy and middle classes and are the majority landowners in the country. In the US, 18.8% of black people live below the poverty line, compared to 7.3% of white people.

The impact of mining today

According to a November 2020 Human Rights Watch report, Tiffany & Co. have made significant progress in ensuring that human rights are observed in their supply chain since 2018. Clearly, they feel a certain public pressure to do so.

Even with this renewed effort, the mining of precious metals and commodities still poses many fundamental ethical questions of workers’ rights, to which Tiffany’s are not immune. Issues such as the dispossession of land of indigenous communities, unsafe working conditions during Covid-19, the inherently hazardous work involved in mining, and low incomes for the workers who produce their wealth remain. Added to that, the impact of large-scale industrial mining is wreaking havoc on the environment, contributing to the climate disaster we are experiencing.

The advertisement goes further in its attempt to glean ‘woke’ points with its inclusion of an artwork by Jean-Michel Basquiat entitled Equals Pi.  Basquiat was a black, anti-capitalist artist who made art that laid bare issues of race and class, including the slavery used in building the capitalist US. Basquiat had a particular dislike of corporations. In addition, he wanted his work to be shown in public galleries and museums so that it would be accessible to the working class and not hidden away by wealthy, private owners. The fact that Tiffany’s have purchased the artwork, and that it will only be on display in their New York store, goes against everything that the artist stood for.

To add insult to injury, the painting is used as nothing more than a prop in the advertisement. Tiffany’s Vice President has also bizarrely suggested that Basquiat may have deliberately chosen the blue of the painting as an homage to the company’s signature blue. He goes on to point out that the only reference to this signature colour in the ad is the presence of the artwork. Basquiat’s work, then, has lost all meaning and context, and is presented as a stand-in for the company itself. This is typical of the capitalist commodification of art and the watering down of artwork which critiques it.

On the jeweller’s website, the Carters (Beyoncé and Jay Z) are quoted as saying, “love is the diamond that the jewellery and art decorates”. This compounds the idea that Basquiat’s art should be viewed purely as a decorative prop, devoid of its anti-capitalist content and criticism of corporations such as Tiffany’s. This is a literal whitewashing of the artwork, as well as an attempt to soften the image of the company by equating it with ‘love’.

No ethical consumption under capitalism

In short, there is no ethical consumption under capitalism. Tiffany’s have attempted to piggyback off the work of people of colour in a cheap bid to gain relevance and credibility. A woman of colour wearing a diamond appropriated through extreme exploitation of other people of colour does not wash away the blood that was spilled in its extraction.

While the representation of people of colour is important, the public are no longer fooled by empty, tokenistic gestures by self-serving corporations. The outrage that has erupted over this advertisement is testament to that. No amount of woke-washing and hollow representation is going to quell the tide of working-class consciousness. Stunts like these thankfully serve to further expose the injustice and inequality of the system and underline the need for a complete system change. Awareness of the inherent injustices of capitalism is the first step in organising against it. The next is building solidarity between all oppressed and exploited people, which must lead to actively fighting the system and fighting for democratic socialist change, where society’s wealth is publicly owned and democratically planned to meet human need and safeguard our planet.