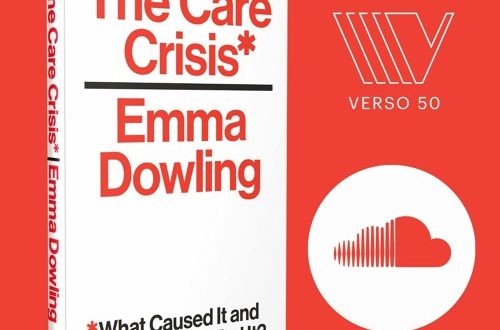 In her book The Care Crisis: What Caused It and How Can We End It, Emma Dowling explores the multifaceted world of care, and its degradation under decades of neoliberalism, and capitalism today. With a special focus on the situation in Britain, Dowling examines not only what we mean by ‘care’ and ‘care work’ but also, who carries out this work, who receives adequate care and who doesn’t.

By naming our current situation a “crisis” she brings to light the many issues related to care and the disproportionate impact it has on working-class communities. While much of the prescient research for the book was done prior to the Covid pandemic, this January 2021 publication is able to convincingly make the case that the new conditions make the subject matter even more urgent.

There is a global deficit of care, with a growing number of the world’s population unable to access the care they need. In 2015 there were an estimated 2.1 billion people worldwide in need of care, mostly children and the elderly. By 2030 the total is expected to reach 2.3 billion.

The author addresses issues related to paid care work, unpaid care work and state-provision. All three are interconnected and play an important role in meeting (and in many cases not meeting) the care needs of individuals and communities. This interconnection can be seen in the role of women and the disproportionate burden of care work placed upon them, both paid and unpaid.

Dowling locates the role of women and the nuclear family in supporting the capitalist economy. Workers function better in the workplace in making profits for the capitalists as a result of unpaid care at home. One international study showed that women do 3.3 times more unpaid care work than men. Studies show that worldwide mothers (but not fathers) suffer from income loss as a result of having children, and a lack of affordable childcare is the main reason why mothers no longer engage in paid employment or work part time.

Dowling attributes much of the current care crisis to the wave of austerity following the 2008 recession. The Care Crisis illustrates the human cost of the same. This can be seen in the reformed funding model of Local Authorities (responsible for community and social care services) with some services losing over half of their funding. The result is that those who rely heavily on such services are being squeezed further into precarity. One stark example of this is the fact that nearly half of those living in poverty in the UK live in households with a disabled person.

What is equally startling is the policy of commercial expansion of private services within the welfare state through state contracts (such as fostering services) or through other means of commercialisation of aspects of the sector. The greater reliance of Local Authorities on private sources of funding has proven to be devastating on the quality and scope of services provided.

For example, Dowling describes how charity services, in attempting to plug the gaps in welfare provision, are in fact being normalised by the very welfare state that has turned its back on so many people. For example, thousands of referrals are made to food banks by state agencies each year, with these agencies providing tokens to confirm the recipient’s eligibility! The amount of food banks in the UK has now grown to over 2,000. These are run entirely by volunteers, who, if they were to receive the minimum wage would cost £30 million.

Particularly illuminating are the short vignettes: a junior doctor on strike, a couple who feel conflicted over minding their elderly mother, a social worker lamenting the funding cuts and their detrimental effects on the outcomes of the people she works with.

The author also examines the notion of “self-care”, highlighting its ascent in the wake of the crash. Much of the discourse around self-care is shrouded in consumer culture and self-optimisation. Trends such as clean eating, clean beauty and other market remedies are a quick fix that detract from the wider question of why people are feeling burnt out, stressed and unhealthy. The structural nature of individual problems is hidden. According to capitalism, if you’re not coping, it’s your fault.

Dowling highlights a need for “a transformation of the structural need for care”, that society should be organised around care, as opposed to the neoliberal focus on the individual. Truly valuing care, it’s argued, means providing time for unpaid care, as well as massively investing in quality community care. Pay and conditions of care-workers, some of the lowest-paid sections of the workforce, need to be dramatically improved. While Dowling also hints at more radical solutions, the triumph of this book is the excellent overview of care work under capitalism. In short, real care is fundamentally at odds with a system that cares about profit first and above all else — Emma Dowling has forensically delineated this truth in The Care Crisis.