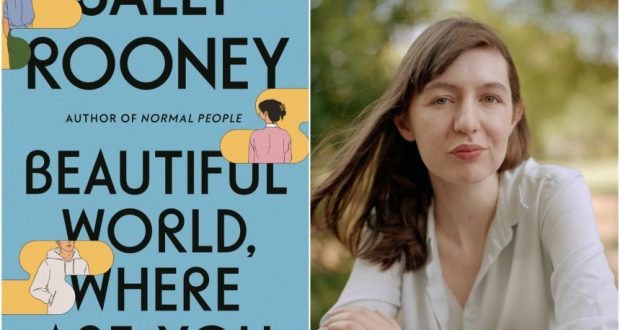 Sally Rooney’s third novel, Beautiful World, Where Are You, was one of the most anticipated and hyped-up book releases in recent memory. For about two months in advance all of Dublin seemed to be waiting with bated breath for the 7 September release date advertised in every bookshop window — and a few fanatics could even hope to win a Beautiful World bucket hat if they were lucky! Many of the same millennials who waited in long queues outside of local bookstores for the final installation of the Harry Potter series in 2007 were among those who received complimentary Sally Rooney buttons and bookmarks with their opening day purchase in 2021; except now they are all radical lefties and trans-inclusive feminists.

Whereas Conversations with Friends and Normal People were deep examinations of young college radicals and their messy relationships, Beautiful World is centered on a friendship between two women in their late twenties / early thirties navigating a different stage of adulthood and relationships in a world that seems to be rapidly deteriorating around them. Alice, who is broadly thought to be a stand-in for Rooney’s own consciousness, is a successful writer, who after suffering a mental breakdown, is wrestling with the purpose and ethics of her work. Eileen, who was considered the more gifted of the two friends in college, still lives in Dublin, has been recently broken up with by her boyfriend, and makes a pittance at her job editing articles at a literary magazine.

There are certainly elements to criticise in this novel. Rooney is dubbed a Marxist in almost every article about her work. She certainly understands that exploitation of both people and the planet is at the heart of capitalism; and that it is a defunct system that has outlived its use — a sentiment that is undoubtedly refreshing to a generation of readers who are being priced out of the estates they grew up in, and are accustomed to news feeds filled with systemic misogyny and racism, major weather events, and regions ravaged by war. And yet Rooney’s perspective on being able to fundamentally challenge a society built on inequality and violence seems cynical at best. This is reflected in comments her characters make about climate change: (wondering if the best they can do is be personally sustainable in the face of climate disaster) or her flirtation with religion in the character of Simon, a preternaturally “perfect” central character in his early thirties who manages to be a regular mass attendee while also working for a radical left-wing political party — a fairly unbelievable idea given that the atrocities committed by the Catholic Church are at the heart of radical and progressive sentiment amongst young Irish people.

At one point Rooney’s character Eileen, while discussing with friends at a pub about the Marxist definition of working class, mentions how the rates of exploitation for younger generations have become so extreme that more and more people are becoming working class, and that it is not a purely cultural distinction. She says, “When I first started going around talking about Marxism, people laughed at me. Now it’s everyone’s thing.” It’s hard to tell whether Rooney thinks Marxism is becoming passé, a viewpoint that, if true, is likely reflective of the empty radicalism she hears in wealthy and elite literary circles (a perspective embodied in the character of Alice). But in this simple exchange between friends she answers her own question. As Marx and Engels wrote in the Communist Manifesto, “what the bourgeoisie produces; above all; are its own gravediggers.”

Having said this, the tenderness and sensitivity that Rooney demonstrates towards her characters serves to undercut her own cynicism about humanity. The emotional core of the novel is a series of emails exchanged between two college friends, now living on opposite coasts of Ireland and grappling with how to find meaning and joy in a fundamentally unequal and unfair world. In between the emails, Rooney narrates the minutiae of Eileen and Alice’s lives — love, work, friends’ birthday parties — in an extremely sparse and removed voice. One reviewer at The Dartmouth described the third-person limited narration as “voyeuristic” and “cold.” Meanwhile a New York Times review described it as “lovely”, but also as if “Rooney writes scenes as though she had to type them out on T-89” (for any potential zoomers reading this article, this was an early form of arduous texting we had to suffer through before the smartphone).

For me, the removed narration worked — and in fact suited the central theme quite well: the search for beauty and meaning in life, even in the face of capitalist destruction.

In their email exchanges, Eileen and Alice grapple with both the minute and meta issues that plague them; a bad date, and the collapse of civilization; a passive aggressive quip about a delayed response; and what the purpose of art is in a world desperate for fundamental change. It is in these personal, intelligent, and often overwrought and frustratingly uncommunicative exchanges that the emotional thrum of the novel lives; and in between, Rooney, who is likely grappling with these questions herself, floats above the exchanges without intimating an answer or a judgement. In describing the feeling of an empty room, or the touch of a wrist; in observing that Alice “seemed to be anxious”, Rooney puts herself in the position of so many of her readers; not knowing if she has an answer for the big and small questions, but sincerely hoping that we all find one.

One of my favourite reviews to date was written by James Greig in Tribune magazine. In this review he writes, “The characters of ‘Beautiful World, Where Are You’ show that worrying about our personal lives and worrying about capitalism don’t have to be mutually exclusive — and that happiness doesn’t have to mean capitulation.” This sentiment is at the heart of why ultimately, I deeply enjoyed Sally Rooney’s latest novel — even if I am not totally convinced that Sally Rooney herself is sold on her character’s conclusions.

As a millennial that did queue for the latest Harry Potter novel in 2007, so much has unfolded in the interim 14 years to fundamentally alter my outlook on life. It is impossible to be young and socially conscious and to not see your personal strife connected with larger systemic questions and the broader suffering of the global working class, even when the subjugation of others often far outweighs my own. Sally Rooney’s characters’ seemingly trivial problems of work, friendship and dating are juxtaposed to the backdrop of global exploitation. But rather than dismissing Eileen’s anxiety, or Felix’s alienation in his warehouse job as “first world problems”, Rooney manages to pose the question: what if we all deserve better? What if the trivialities of our day to day are the source of human connection? Of solidarity? Of the seeds of a movement that can bring about a new and better world?

The last chapter ends with an emotional gesture towards the future, even as the novel ends at the beginning of the Covid-19 pandemic that still looms large with no clear end in sight. Eileen decides to have a child; a decision many young people her age have to make one way or another, but one which has been given extra weight in the context of the many catastrophes we witness daily. In explaining her decision to Alice she says, whether or not she decided to have a child, she still sees herself on the side of the millions of children that will be born into the world irregardless of her personal decision. “We have to try either way to build a world they can live in.”

This sentiment will be one that resonates with many. There are no guarantees moving forward; but there is a genuine and growing sense that we deserve better, and that the possibility of a better future is worth fighting for. It is this sentiment that is not only at the heart of Marxism, but at the core of what it means to be human; and Rooney’s ability to illustrate this is her greatest strength.