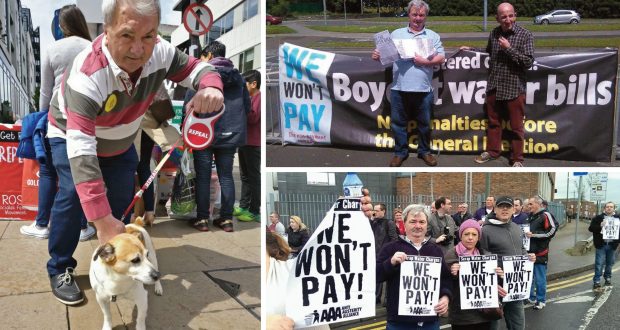 It was with deep shock and sadness that we received the sudden news that our good friend and comrade Tony O’Mahony had passed away unexpectedly on 11 June of this year. On this, his three-month anniversary, we look back on his life and his commitment to making the world a better place for working-class people.

Tony was an ordinary man originally from St. Mary’s Park, but he lived quite an extraordinary life.

One incident in particular demonstrated his instinctive and faultless selflessness. While working driving a truck, he met a car driving on the wrong side of the road overtaking another car. With nowhere to go, Tony faced a horrible decision. If he kept driving, it is likely that the young man in the other car would not have survived. So, without hesitating, Tony turned his truck off the road and into the ditch, risking his own life. The grateful family of the young man visited Tony in hospital to thank him for his sacrifice. If one moment could sum up Tony, this would be it.

Tony had moved to the UK in the 80s and worked as a bus driver for a time. He also worked driving so-called “very important people” and received training from the Met police in evasive driving, skills which he evidently put to good use later! Tony moved back to Ireland and started working as a continental truck driver until about 11 years ago when he had to stop due to epilepsy brought on by another serious crash he was involved in. His capacity to bounce back from difficult episodes such as these gave rise to his nickname, “Lucky”.

A socialist his entire life, Tony grew increasingly frustrated at the conditions facing working-class people in Ireland, which eventually provoked him into getting active in the We Won’t Pay Campaign against the water charges. Like always in his life, Tony committed everything to the cause and was a tireless working-class fighter to the end. He went on to join the Anti Austerity Alliance, now Solidarity, and later joined the Socialist Party as well. With a voracious appetite for politics, he became a student of working-class history reading up on the Limerick Soviet as well as Peter Hadden’s analysis of the national question in Ireland.

He was to the fore in every major struggle from the water charges to Repeal. He would be present on every activity, whether that would be stalls with his dog Bestie by his side, postering, door knocking, or meetings. If the Party was stuck getting material delivered from Dublin, Tony would always be ready to hire a van and drive up to collect it. In the 2019 local election campaign, Tony and his good friend and comrade Donacha postered most of the Northside of the city in the dead of night to get the best spots before the other political parties.

A tireless worker, Tony had recently been passed fit to return to work as a truck driver. Once again he was actively campaigning and winning concessions for workers. As the Covid-19 pandemic struck in early 2020, Tony was working for a haulage company importing medical supplies into Ireland. Shipping companies were putting drivers at risk by insisting that they must share a small cabin on the ship – roughly equivalent to a twin room, 12ft by 10ft. Drivers were told if they did not accept these conditions that they would not be allowed on the ferry. Tony correctly identified this as the shipping companies putting profits before workers’ lives and, together with other workers, forced them into a climb down.

Tony was also devoted to his family and very proud of their achievements. When his niece Elaine got a university place in Trinity College Dublin, it was a measure of Tony’s kindness and pride that he would spend every Sunday night for two years bringing her to the train station in Limerick before then driving up to Dublin the following Friday to collect her and drive her back to Limerick.

Tony’s pride and joy was his dog Bestie, named after George Best. Bestie was known to us all for attending many demonstrations and protests along with Tony. A few years ago, Tony received a devastating diagnosis from Bestie’s vet that he was suffering from epileptic seizures and recommended that he should be put down. Tony wouldn’t countenance this and through determined and careful attention to his medical needs Bestie has been given a long, healthy, and rewarding life.

Selfless acts of kindness like these were the mark of Tony’s life.

The other side of Tony was his sociability. A bit of a rascal, Tony was always up for the craic or a social and he never failed to charm anyone he would meet with his warmth and kindness. He was a regular in the A1 Bar and later Claughaun. An avid sports fan, it is fitting that Limerick retained the Liam McCarthy Cup for the first time this year. Tony would have been proudly flying the green and white Limerick flag.