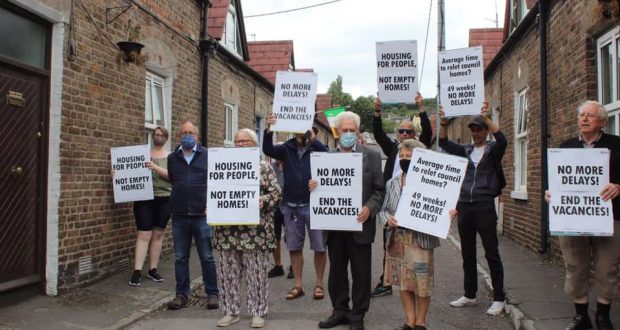 The protest was organised outside the historic Maddens Buildings, homes reserved solely for older and more vulnerable tenants after residents reported 11 vacant homes. Since then, Council has admitted that vacancy stands at 14 homes, close to a fifth of all homes in the estate. With accommodation for older residents particularly short, this situation has left many vulnerable people having to live in cramped, unsuitable conditions or worse, continuing to face homelessness in their later years.

Cork City currently has almost 450 empty social housing units left to rot in the worst housing crisis the state has ever seen. Amongst homes reserved for elderly tenants specifically, there are over 70 vacant units throughout the city alone.

A long-time community activist, Denis J Fitzpatrick, spoke at the protest. Denis is 65 and has been homeless for many years. He spoke about how life-changing any one of those homes would be for him but due to Council bureaucracy had his years removed from the waiting list after he failed to respond to a letter sent to a previous home he had been evicted from after the property was purchased by NAMA.

A microcosm of a crisis

The vacant homes in Madden’s Buildings represent a microcosm of the overall housing crisis. A crisis that is largely manufactured by the parties of the capitalist establishment, who refuse to invest in the building or renovating of public homes. They are hopelessly reliant and beholden to the profiteers in the form of landlords, developers, vulture and cuckoo funds, the very people that are exacerbating this crisis.

The 450 vacant homes across Cork City show that we can have no faith in the Government nor local authorities to tackle the issue. Only a mass movement from below, capable of organising working-class people across the country can put sufficient pressure to force action on housing. Such action means slashing rents to affordable levels and freezing them, banning evictions and implementing a major programme to build public homes on public land. Small protests such as the one in Madden’s Buildings can point the way forward towards a movement of that kind.