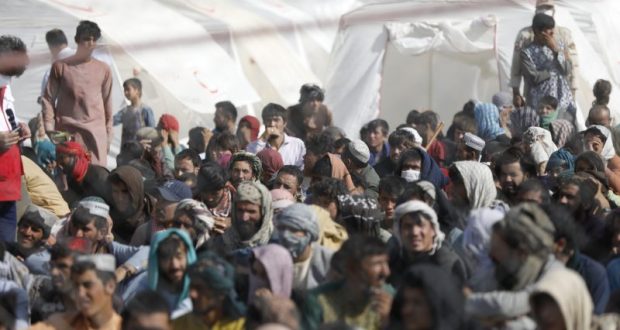 By Per Olssen, Updated article first published in “Offensiv”, paper of Rättvisepartiet Socialisterna – our sister organisation in Sweden

On Monday night 30 August, the remaining American soldiers and other foreign troops left Afghanistan. The withdrawal, which marked the end of the United States’ longest war in Afghanistan, was immediately followed by the Taliban’s take over of Kabul Airport.

After 20 years of US-led war, the Taliban are back in power in Afghanistan. An already terrifying situation threatens to turn into a disaster of epic proportions.

According to the International Crisis Group:

“Unprecedented numbers of civilians were killed and injured in the early months of 2021 and at least 560,000 people were displaced including nearly 120,000 fleeing to Kabul as they sought refuge from Taliban advances. Those numbers represent the worst-ever period in what for some years has been the world´s deadliest conflict. The count of displaced people in Afghanistan over the last seven months was twice the monthly average in the last five years, and the figures are expected to grow as aid agencies’ accounting catches up with the scale of the crisis. Some 80 per cent of those fleeing violence since the end of May have been women and children.”

As a result of yet another year of drought, 40 percent of this year’s wheat crop has been ruined. Half of the average Afghan’s daily calorific intake comes from wheat. This together with the impact of war and the looming economic collapse, has meant that prices are going up every day. ‘Save the Children’ in Afghanistan has reported price hikes of up to 63% over the past month on goods such as flour, oil, beans and gas. The prices of vegetables in Kabul have climbed another 50% in recent weeks. Fuel prices are up 75% and rising.

Already, one in three Afghans are acutely food insecure. In the coming week, millions of Afghans will face starvation as food and other lifesaving aid is about to run out.

After US imperialism’s withdrawal, a number of surrounding imperialist powers are preparing to gain a foothold in Afghanistan and recognise the Taliban’s rule. As a gesture to the imperialist powers and to give the impression that the new Islamic Emirate of Afghanistan that the Taliban had proclaimed is different from that of 1996–2001, it is possible that the new Afghan government will take on the form of a “broader” government, although the first announcements appear to contradict this.

But no matter how the ministerial posts are distributed and despite all the talk of a “division of power”, Afghanistan will be ruled by the reactionary, oppressive Taliban, and their reign of terror.

Only the struggle and independent organisation of the Afghan masses can liberate the country and secure peace.

This year, more than half a million people in Afghanistan have been forced to flee their homes, which means that more than 3.5 million people, almost a tenth of the population, have been displaced within the country.

In an agreement with nearly 100 countries, including Sweden, the Taliban have promised that foreign and Afghan citizens with “correct documentation” will be able to leave the country even after the evacuation ended at the end of August.

But what is this promise worth and how many have the “correct documentation”, or will dare/have the opportunity to get it?

Furthermore, most escape routes are closed, the Taliban have taken control of the border posts and do not allow Afghans on the run to pass if they do not have travel documents (“correct documentation”), which few have.

At the same time, neighbouring countries are closing their borders to Afghanistan. On 31 August, Uzbekistan completely closed its border with Afghanistan. Iran and Pakistan, to where most of the many millions of Afghans who were previously forced to flee the country have fled, and have over the years forcibly deported hundreds of thousands of Afghans, are now threatening to send back the newly arrived Afghan refugees too. According to Iranian Interior Minister, Hossein Ghassemi, deportations will begin “as soon as the situation allows

“Pakistan, which already shelters an estimated 3 million Afghan refugees [ten times more than Europe — editorial comment] initially refused to allow entry to more refugees and has been working to complete a fence along its porous boundary with Afghanistan, although some gates have since reopened to uprooted Afghans. Iran, which hosts more than 2 million Afghan refugees, has been setting up makeshift camps but has urged repatriation as soon as possible. Even during the recent heights of the war, the two countries were repatriating large numbers of Afghans. In 2020 alone, more than one million Afghan migrants were returned or deported, largely from Iran and Pakistan, though some also from further away, including from Western countries. Central Asian countries have also been reluctant to take Afghan refugees, even temporarily, in recent weeks.”

As the situation in Afghanistan becomes increasingly desperate, the EU is building new walls against Afghan refugees.

The goal of the EU and the Swedish government is that fleeing Afghans should stay in the region. As Human Rights Watch comments:

“European Union leaders seem bent on a monstrous PR campaign to tell Afghans (and European voters) that those fleeing Afghanistan should not even think about finding safe haven in Europe”.

The meeting of EU interior ministers on 31 August sent the message that Afghans should stay in the region: “The meeting’s final statement couldn’t be more blunt: “Incentives to illegal migration should be avoided.” The word choices feel deliberate, with all the references to “illegal migration,” “unauthorized entries,” and security concerns, but not to the legitimate exercise of the right to seek asylum. Among the few concrete measures mentioned are “targeted information campaigns” to discourage refugees from attempting to reach Europe. The statement never acknowledges obligations of international protection when people face persecution and similar serious threats to their rights.

“Already, individual EU states are matching their hostile rhetoric with harmful action. Poland has trapped a group of 32 Afghans at its border with Belarus, refusing to allow them in to apply for asylum. Croatia is pushing Afghans back into Bosnia. Greece finished building a 40-kilometer (25 mile) wall on its border with Turkey.”

The expansion of Fortress Europe could mean that the Taliban will be forced to act as EU border guards, in the same way as EU has founded several militias in Libya and Hemeti’s Rapid Support Force, the ruthless paramilitary group, which now runs Sudan.

The answer to this escalation of the inhuman refugee policy must be a struggle to let the Afghan refugees stay by granting amnesty to those who need it. 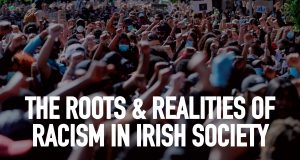 The roots and realities of racism in Irish society 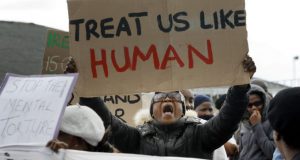 End Direct Provision: ­Right to work for refugees must be granted 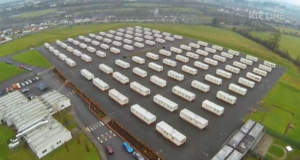