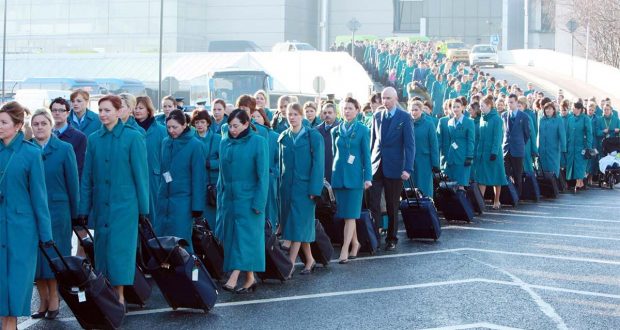 As both ground and cabin crews at Aer Lingus vote against management austerity packages, Ruth Coppinger spoke to Aer Lingus workers about what workers have been going through at the airline.

“I have young cabin crew colleagues regularly attending soup kitchens for meals and getting help from St Vincent de Paul. My own brother bought my son’s school books this year. Mental health is on the floor.” (Senior cabin crew)

“We’re having everything taken away. My parents have done food shopping for us throughout the pandemic. I’m paying rent of €1,550 with two children to support.” (Ground crew employee).

It’s hard to believe these words are from cabin and ground crew members, who’ve worked for decades at Aer Lingus — a company established and formerly owned by the Irish state, which was known for union jobs with decent wages and conditions.

They’re backed up by many Aer Lingus workers who have sent their payslips during the pandemic to illustrate what they’ve been reduced to by a company taking the maxim of ‘never waste a good crisis’ to new levels.

“Aer Lingus was on the Late Late Show being applauded for bringing in PPE. We were told we were frontline workers. The next week our wage packets were down dramatically.”

Of course it’s true that aviation has been through a tough time with Covid. But all airlines went into the pandemic with fat, with huge reserves from a decade of boom. Aer Lingus was no different, having made a profit of €330 million in 2019 alone. All airlines have also enjoyed massive state subsidies. “The government bankrolled the Aer Lingus wage bill while we were on 50 or 60% of our basic pay.”  Cabin crew emphasise that they are more and more reliant on non-basic pay, on planes being up in the air so they can make commission.

“When Aer Lingus was making profits, they wouldn’t give us profit shares. But when things go bad, it’s all doom and gloom. They wouldn’t share the spoils, but we must share the loss.”

Aer Lingus was sold off by previous governments and is now owned by aviation titan,  IAG. Workers point out that Aer Lingus is actually very productive and cost effective for IAG:

Aer Lingus has a new ‘girl boss’ but the majority female workforce isn’t expecting any solidarity. “The bosses come in from IAG for a few years, usually from British Airways, try to make their mark and go.”

Both sets of workers have bravely rejected, by margins of over 80%, the respective austerity plans management put to them amid threats of outsourcing and layoffs.

The plans included a pay freeze for four years, another new yellow pack pay scale, a massive cut in crew or team numbers, big productivity increases, individualised / reduced commission and much more. “We can’t give anymore,” said a ground crew worker. “We’ve no choice but to fight.”

Workers voted No without any encouragement from their union leaderships, FORSA making no recommendation and SIPTU advocating acceptance to protect an anti-outsourcing agreement it has with the company. But what’s the point of not being outsourced if it means the same drastic work conditions?

Aer Lingus have responded to the votes by saying they’ll look at temporarily laying off staff.

In an exchange in the Dáil with Leo Varadkar (who’s also minister for Enterprise, Trade and Employment in a constituency bordering Dublin Airport), Mick Barry, Socialist Party TD, asked how come the taxpayer can give Aer Lingus €150 million from the Strategic Investment Fund — on top of the millions in wage subventions — without any conditions attached, such as protecting employment and work conditions?

It’s very clear that aviation is already recovering. Workers report bookings are strong since Biden announced the lifting of US travel restrictions. From Spring 2022, a travel boom is anticipated after two years of staycations and pent-up demand. Aer Lingus and IAG want these draconian cuts firmly in place before that happens.

The cabin crew plan has been referred to the WRC. It’s not known how seriously management will engage with this process, but even if they do, the process can only lead to demands for concessions of some kind by workers. It is vital workers use this time to come together now to discuss how to fight this. For example, meeting up and discussing how solidarity can be built within and between cabin, ground and the various sectors of workers; what tactics are most effective; how links can be forged to strengthen a united campaign by all the workforce, rather than a salami tactic of one group at a time.

Part of the campaign can include maximising political pressure on TDs in airport locations. One demand should be for the renationalisation of Aer Lingus to guarantee connectivity for an island nation, for the public to enjoy the profits of the airline in the good times, rather than just greedy shareholders and for decent pay and work conditions for the employees who keep the airline going. The company should also be democratically run by elected representatives from the workforce itself and from the wider working class.

The Socialist Party would like to assist workers in any way to resist allowing companies to use a global pandemic to inflict permanent deterioration in work conditions.