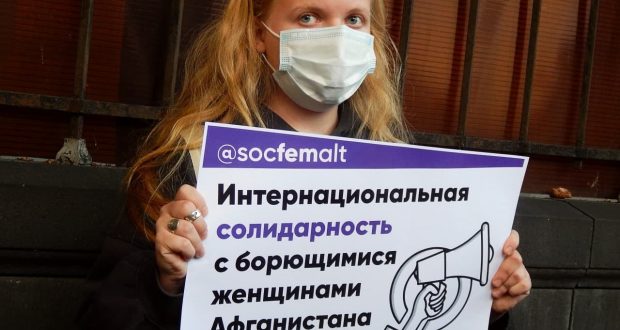 Appeal for solidarity from socialist feminist activists in Russia as six members of Socialist Feminist Alternative were arrested yesterday.

SocFemAlternative and Sotsialisticheskaya Alternativa (our sister organisation in Russian) organised pickets in solidarity with Afghan women in Russia today. In the appeal posted yesterday which was liked by 1715 people we pointed out that “Afghan women have been fighting for their rights for more than 40 years against imperialism, fundamentalism and capitalism. We are in solidarity with those women who have demonstrated and picketed and who have often had to conduct struggle against both the Taliban and imperialist occupiers. They are courageous in their struggle against universal poverty, violence and disorder. Afghan women need our solidarity. We call on all those who agree to express their solidarity with Afghan women who are fighting fundamentalism and imperialist intervention, in their struggle for democratic freedoms and a secular state!”

In fact, pickets took place in at least three cities, including Moscow and St Petersburg. As is now the case, even ‘single person pickets’ which are supposedly legal and do not need permission from the state are treated as illegal. Six of our comrades were unceremoniously dragged off by the police. Four have been charged with offences that carry a fine of up to 200 euros, two Kseniia Bezdenezhnykh, who was our candidate to participate in the coming Parliamentary election and possibly one other have been kept overnight and will be taken to court tomorrow on charges that carry possible sentences of thirty days in prison or up to 3400 euros.

The absurdity of the whole situation is that the Taliban has been declared a ‘terrorist organisation” in Russia. But now Russia is keen to reach an agreement with the Taliban government. Womens’ rights are sacrificed both in Afghanistan and in Russia.

Please send urgent protests to the Russian embassies in your country to demand that all charges are dropped against Kseniia Bezdenezhnykh and the five others detained and taken to OVD Presnensky, Moscow. 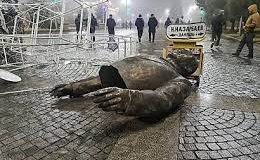