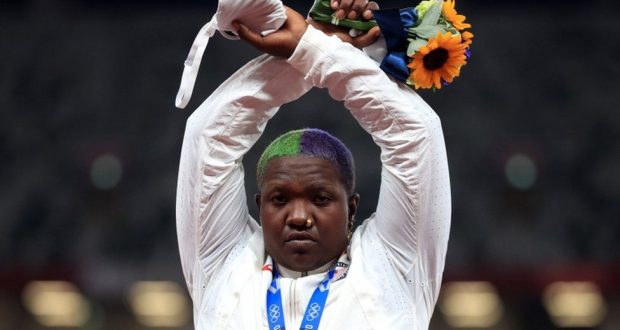 The Norway Beach Handball team went viral recently after they were fined by the European Handball Federation for wearing shorts instead of bikini bottoms, with the organisation stating that it was “improper clothing”. Team captain Katinka Haltvik said that the rule is “embarrassing” and for obvious reasons. While the men’s team wear a vest top and shorts, the women are forced to wear bikini bottoms “with a close fit and cut on an upward angle towards the top of the leg”. Beach handball isn’t featured in the Olympics, but beach volleyball is, and it has very similar rules around the men’s and women’s clothing.

Similar problems of overt sexualisation with clothing take place in gymnastics. To protest this, the German Gymnastics team is wearing full body unitards at this year’s Olympics. The fact that women in the Olympics are finally taking a stand against these sexist rules around clothing is very encouraging and is testament to the mass movements against oppression which have been sweeping the globe in recent years, from Ni Una Menos to Black Lives Matter.

The radicalisation of young people

Eighteen year old Costa Rican gymnast, Luciana Alvarado, who took a knee and raised her fist in the air at the end of her routine, said she was inspired by the Black Lives Matter movement which spread across the world following the murder of George Floyd. Raven Saunders, who does shot put for the USA, raised her arms and crossed them in the shape of an “X” on the podium after receiving her silver medal. An act reminiscent of the black power salute done on the podium by Tommie Smith and John Carlos in 1968. She later stated that the gesture was “for oppressed people”. All of these protests reflect the growing consciousness of so many young people, especially women, to issues of oppression, and the need to fight back against it.

Simone Biles’ decision to pull out of some of the events for mental health reasons has been another important moment in the Olympics. Her decision to prioritise her health shows that she realises that her mental well-being is more important than winning another medal for the USA, a sentiment which is powerful in a system that exploits all working-class people, and especially black women.

Trans and intersex people are being discriminated against in regulations set out by World Athletics, which the International Olympic Committee follow for their rules. These regulations mainly test the level of testosterone the athletes have, to determine their eligibility to race. They have led to several athletes getting negative physiological side effects from trying to artificially reduce their testosterone levels, and some have even undergone invasive surgery simply to be able to compete. These dehumanising and deeply harmful regulations targeting trans and intersex people are based on sexist pseudoscience that testosterone is the sole reason for all athletic ability. Similar regulation is not done in the men’s events, for example to see if they have high levels of oestrogen, which could be an advantage in many endurance sports.

These new regulations don’t only affect trans and intersex people. Cis women have also been prevented from competing as their natural testosterone levels are deemed “too high”. The majority of athletes affected have been black women, including recently two Namibian runners who were disqualified from running in the Olympic 400m event. This is just another example of the regulation of women’s bodies and a way to put more barriers in place for those that already have the most to jump through, such as trans and black women.

These athletes’ natural advantages are being demonised, while, for example, Michael Phelps’ naturally low lactic acid levels is praised. Anti-trans rules in sport haven’t come from nowhere. They are following suit on the many anti-trans laws sweeping the globe recently, such as the bathroom bills in the US. Certain states in the US have also made it illegal for trans kids to participate in sports teams of their gender identity.

The system is at fault

It’s a turning point and very welcome that we are seeing athletes taking a stand for their own rights, as well as against inequality and oppression in general and both have been features of the Euros and the Olympics of 2021. This can exert considerable pressure for change on conservative sporting bodies. Of course, as long as there is still racism, sexism, LGBTQ+phobia and so on, these will still exist in sport. Whether it be the sexualisation of female sports clothing or transphobic regulations limiting intersex and trans athletes’ ability to compete, these are a reflection of society and cannot truly be ended without challenging the system which is perpetrating these ideas. The objectification of female bodies, including in sport, is profitable for the capitalist system, as is the case in the beauty and fashion industry.

Likewise, powerful sporting bodies are unlikely to grapple with the complex task of altering categorisation in sport to become much more inclusive, when this would come up against society’s traditional ideas of gender, and therefore challenge the way society is structured as we know it. A socialist society, which puts need and equality over profit and privilege, would break down the hierarchies and discrimination that capitalism encourages, and would finally make sexism, racism and rigid gender roles ideas of the past.