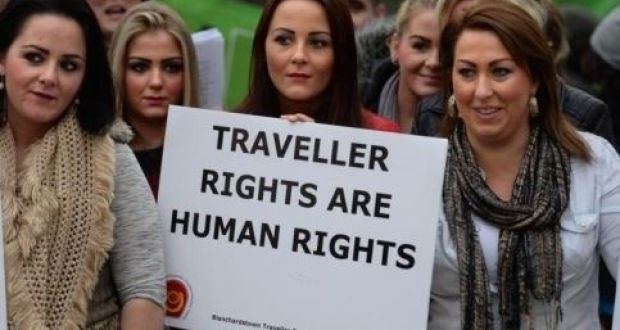 The ‘No End in Site’ report on the Spring Lane halting site in Cork City by the Ombudsman for Children exposes horrific racism and discrimination by the Irish State. Since the report was published many other Travellers have come forward about the appalling living conditions they are subjected to.

The Ombudsman for Children described the Spring Lane site as deplorable’ and ‘shocking’. The report is the product of three years’ work and is based on the experiences of the children in the site, who make up 66 of the 140 people living there. One 12-year-old stated that ‘It’s like an abandoned place that people forgot about, it’s like we’re forgotten, we feel like garbage.’

The site built on an old quarry is overcrowded, unsafe, and homes are damp and there is a rat infestation problem. There is also poor drainage, meaning there is a large lagoon of water and raw sewage on the site.

Cork City Council is condemned in the report. The council failed to upkeep toilet and shower facilities, and neglected waste management and pest control. Despite the number of children living there the council did not cater for their play facilities. The council also neglected the administration related to housing applications by Traveller families in Spring Lane, meaning it is likely families lost out on housing offers over the years. The report found that the council’s explanation was ‘untrue’ or inadequate.

Cork City Council’s response has been to not accept the report and dispute the findings. The Taoiseach, who is from Cork City, has yet to meet with the Ombudsman for Children on the situation.

The deplorable conditions in Spring Lane, are far from an aberration. Housing budgets for the Traveller Community are wilfully left unspent by many local authorities. On the one hand, local councils are calling for increases to their housing budgets due to the severe housing shortage; and on the other hand, they are refusing to spend meagre sums allocated for Traveller accommodation. Since 2000, €69 million allocated for Traveller accommodation has been left unspent by local councils. Up and down the State there are conditions akin to Spring Lane due to this neglect.

Since the publication of ‘No End in Site’ in May 2021, there have been several other reports published about the horrendous living conditions that Travellers are subjected to. Over the summer, eight were published about living conditions similar to those in Spring Lane. The Irish Human Rights and Equality Commission (IHREC) in July found31 examples of underspending by local authorities on Traveller accommodation budgets.

After years of campaigning, Travellers won recognition as an ethnic minority in 2017, however, for most this has not made a change to their lived reality. The Irish State has continued to wage its one-sided war on this oppressed group.

This is seen in the utter neglect of Traveller-specific accommodation by local authorities. It is also seen in the daily harassment and discrimination many face from Gardaí. There is widespread discrimination by employers and landlords and the unemployment rate among Travellers is just over 80%. While approximately one in ten members of the Traveller community is homeless; the ‘hidden homeless’ figure is a lot higher – 39% are living in overcrowded accommodation according to the last census. Travellers are even whitewashed out of history; their history and culture is not part of the national curriculum despite being an indigenous ethnic minority with a rich culture.

Politicians and candidates from the establishment parties often use anti-Traveller rhetoric and dog-whistles to garner votes and distract from their failings. It is not just political failures such as Peter Casey, but also mainstream establishment candidates. A notable case was that of the then council candidate Fine Gael’s Josepha Madigan (now incredibly Minister of State for “inclusion”!) who opposed council land in Goatstown, in South County Dublin, being used for Traveller accommodation arguing for it to be located away from settled residents and on the margins of communities.

Travellers are increasingly growing in confidence and rightfully demanding their right to education, decent homes and an end to discrimination. The Socialist Party fully supports Travellers in their campaigning for justice. James Connolly outlined how socialists support the empowerment of the oppressed when he wrote “None so fitted to break the chains as they who wear them, none so well equipped to decide what is a fetter”.

The wider working class can be allies of the Traveller community. For instance, we see this when we look at the housing crisis where young people’s housing needs are not being met by an anarchic capitalist system. Landlords and REITs make massive profits while the majority suffer. Any movement on housing must bring together those unable to afford rent, those unable to buy a home and those languishing on the housing list, alongside Travellers fighting for culturally appropriate and quality accommodation.

Socialists fight for an end to capitalism; a system where profit is placed ahead of human and environmental need. Discrimination and racism are the products of the capitalist establishment’s poisonous methods of stoking division and the oppression of various groups that go with this. We stand for a democratic socialist society where the wealth of our planet can be used to give everyone access to quality education, homes, employment and protect our environment.