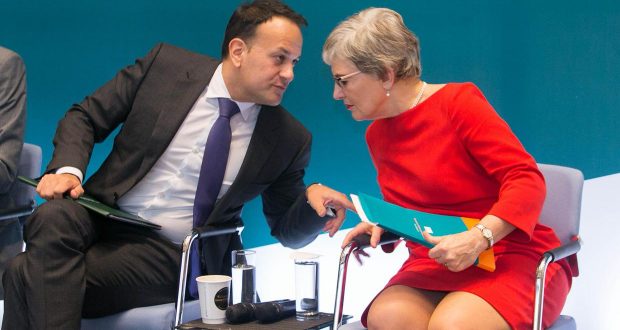 #Merriongate: Another calamity for the out-of-touch establishment

Appointments made with a nod and a wink to state boards have no place in our democracy.

Irish civil servants in the relevant departments will have been scurrying frantically in the last few days to update Covid-19 safety guidelines for the hospitality sector. Yes, it appears to have transpired that the government significantly loosened restrictions two months ago, but neglected to tell absolutely anyone else about it!

This is the latest fiasco to be visited upon a long-suffering working class by this coalition of chaos and other members of the political establishment. Almost a year since the ‘Golfgate’ controversy, they’ve commemorated it with a (quite illegal-sounding) knees-up in the Merrion — one of Dublin’s most ‘exclusive’ (expensive) hotels. Once again, their overarching arrogance, personal ambition and contempt for ordinary people and the sacrifices that they have made for the last 18 months has landed them in a mess.

The party was organised by former TD and junior minister in the last government, Katherine Zappone and attended by around 50 of her ‘friends’ from Fine Gael, Labour and elsewhere, including Tánaiste Leo Varadkar, newly-elected Labour TD, Ivana Bacik and the secretary-general of her old department (the identities of the dozens of other dignitaries are, as yet, unknown). It appears to have been meant as a grandiose bookend to Zappone’s career in Ireland and a chance to rub shoulders with some of the right-wing establishment figures that she served so well, before embarking on her New York adventure — in a cushy job seemingly created by a FG minister just for her, with no other candidates considered.

Despite the furious spinning from Varadkar and other government politicians, the party was very much against Covid guidelines (as hapless FG senator, Seán Kyne was eventually forced to admit on Thursday night’s Prime Time, while still limply claiming it was not against the underlying law).

In a blatant attempt to protect Varadkar from going the way of Phil Hogan or Dara Calleary, the Attorney General (usually only ever heard from when supposedly telling us, via the government, why various left-wing policies like effective rent controls are unconstitutional) has retrospectively reinterpreted the law that Varadkar, Zappone, et al. seemed to have broken.

Other right-wingers and staunch members of the political establishment getting in on the act of flouting Covid guidelines was the Green Party, which invited its entire membership to Merrion Cricket Club (no relation) in South Dublin last week. Even if the party’s true size is probably closer to half the 3,500 paper membership, it also instructed members to spread the word in their local groups! Luckily, attendance seems to have only been in three figures.

‘Crony capitalism’ – the only kind

Thus far, only Zappone herself has faced any real consequences, losing her part-time but coveted UN job in New York days after being appointed. It had been on thin ice with the already-raging controversy surrounding the strange circumstances of her appointment to the ‘special envoy’ role. By a then happy coincidence, she had already moved to Manhattan, almost as if she knew it was coming months ago (either way, she certainly knew about it well before the lame duck Taoiseach…).

For all the tut-tutting from the commentariat that this was an affront to the supposedly meritocratic nature of their beloved system, this is how appointments to positions of power are invariably made in a capitalist democracy (except that usually an effort is made to make it less blatant). As the antics of the attorney-general show (and for that matter those of the previous AG — lifelong Fine Gaeler and, despite his starring role in Golfgate, still sitting pretty as a Supreme Court judge after brazening out the storm, Séamus Woulfe), these are creatures of the establishment and loyal fighters for their class, not some sort of apolitical ‘best person for the job’.

What this sorry saga and Zappone’s political career illustrate is that there are generous rewards for those well-to-do liberal feminists who pose as uplifters of working-class women, but will invariably sell them out. She did this when she cosied-up to Joan Burton and the Labour Party, who rewarded her with a seat in the Seanad. She did it again in 2014 when she invited the despised Burton into Jobstown, an area she was ripping the heart out of with savage austerity, sparking the famous sit-down protest. She then went on to give much-derided testimony against the protesters at their ludicrous ‘false imprisonment’ trial.

After the demise of Labour in 2016, Katherine quite happily jumped ship and was, with Michael Lowry, among the first “independent” TDs to break ranks (and the deadlock) and back Enda Kenny to continue his wonderful work as Taoiseach. As a reward, she became the junior minister for children in a regime that had dragged tens of thousands of children into poverty, thousands into homelessness, and kept thousands of children of immigrants in deportation camps. As a junior minister, she sided with religious orders and steadfastly refused to give adoptees rights to their information.

More recently, Zappone has gotten back into the fold on the right-wing of the Democratic Party in the US, volunteering in her native Seattle for the Biden-Harris campaign. Now that her UN job is gone down the swanny, maybe Kamala, a fellow bourgeois feminist, will help augment her ministerial pension. Under Secretary for Children in Cages, perhaps?

The whole system needs to go

In stark contrast to Zappone and her ideological ilk, socialist feminists, anti-racism protesters and laid-off workers (overwhelmingly women in the case of Debenhams) fighting for their stolen redundancy money, have been targeted throughout the pandemic by Gardaí cynically using Covid legislation against masked and socially-distanced protesters. Gender violence is a parallel pandemic and very much a matter of life and death. That didn’t stop Gardaí charging a ROSA member in Limerick and giving her a €500 fine for organising a protest following the murder of Sarah Everard by an English police officer.

This government and the entire political establishment are utterly out-of-touch with the lives, problems and struggles of working-class people. This latest political scandal is but another reminder that nothing good can come from these politicians, parties and institutions. We need radical, systemic change throughout society, and that begins with building a political alternative and a mass movement for socialist change.