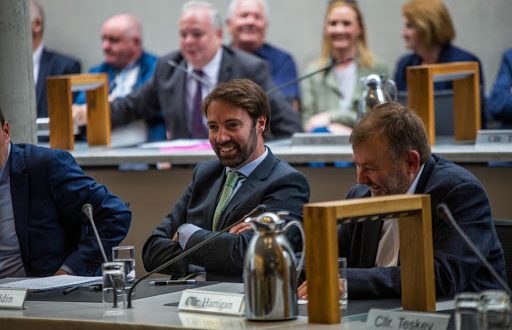 It has been revealed that misogynistic, sexist, and threatening WhatsApp messages have been exchanged between a small number of men and women interested in planning and heritage issues in Limerick city, one of whom is Limerick Green Party TD Brian Leddin.

These horrific messages were primarily aimed at an unnamed well-known female professional and Limerick city councillor Elisa O’Donovan. These attacks included members of the group superimposing the word ‘c***’ onto a photo of the unnamed woman and putting it as the main photo of their group chat, with one member stating that the photo is their “new dartboard.” In a series of vicious and threatening messages they also said that they would throw a grenade at the woman and that she should be “incinerated”. Targeting Cllr O’Donovan, they said:

“She must be ended.”

“As in sleeping with the fishes type thing?”

“Haha fair enough. I know the perfect back garden.”

They called her a “c***” and made jokes about her appearance. Brian Leddin said she was fame hungry and “unhinged”. They also made disgusting sexual comments about how they “nearly would if I was that drunk and she didn’t talk.”

He has also said that he “did not encourage such comments or engage with them,” but it was reportedly Brian Leddin that suggested ironically changing the group photo to a photo of the unnamed woman. He didn’t post it, but he suggested it and stood by as others joked about it. He is also said to have replied with laughing emojis when another member of the group called Elisa O’Donovan a “c***” and he never once told the members of the group to stop.

Cllr O’Donovan received a text apology from Brian Leddin, but apparently only after he learned that a newspaper was going to report on it. Of the apology, Cllr O’Donovan said: “It was weak. It meant nothing to me. He could have stopped this. He could have said ‘no’. Brian speaks about progressive politics and supporting women. He co-opted a woman into his position as a councillor, yet behind the scenes the misogyny really does show. And that’s where it counts. It’s what you do in private that counts and how you think about women, and those chats really says it all about how they are speaking about women.”

He never apologised to the unnamed woman and when given an opportunity to, he declined.

This kind of systemic sexism is one of the reasons why members of ROSA in Limerick held a peaceful and small protest in March to highlight all forms of sexism, misogyny, intimate partner violence, and violence against women. A member of ROSA has been fined €500 for attending that protest. A woman standing socially distanced on the street and holding a sign to try bring awareness to violence against women will be penalised more by the State than a public representative involved in a group chat talking about killing women.

There is a serious epidemic of sexism and violence against women, the UN has even referred to it as the “shadow pandemic”, and the kind of talk that was going on in that group chat perpetuates it. The other members of the group chat haven’t been publicly named yet. They should be named and shamed, and the Green Party must insist that Brian Leddin step down from his position as a TD immediately.

Violent misogynistic language or ideas don’t originate in someone’s head from nowhere. Sexism is deeply woven into the fabric of class society. Despite many advances for women in recent years and the general repulsion with all forms of oppression, systemic sexism remains because capitalism relies on division and the unpaid care work of women, and profits from their second-class status. So, it’s hardly surprising, and perhaps even telling, that supposed ‘liberal’, or ‘progressive’, but still pro-capitalist politicians would employ such abusive and violent language to denigrate women they don’t agree with.

Ultimately attitudes such as these will only be overcome through struggle by a united movement of the working-class majority and all oppressed people. Solidarity in struggle smashed the Eighth Amendment and the ban on gay marriage in the south of Ireland. The lesson is that we cannot rely on politicians who refuse to challenge the oppression and prejudices which are endemic under capitalism. We need our own political movements and organisations, and a socialist alternative. To quote James Connolly, “none so fitted to break the chains as they who wear them”.