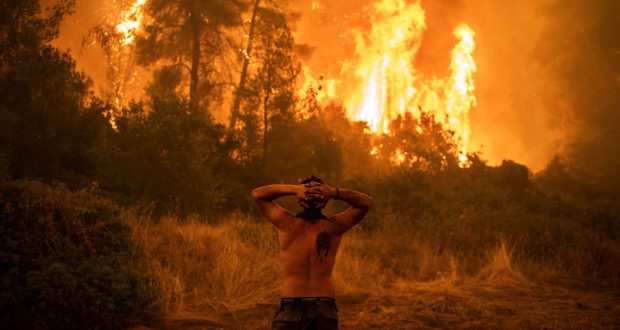 A local resident reacts as he observes a large blaze during an attempt to extinguish forest fires approaching the village of Pefki on Evia (Euboea) island, Greece's second largest island, on August 8, 2021. - Hundreds of Greek firefighters fought desperately on August 8 to control wildfires on the island of Evia that have charred vast areas of pine forest, destroyed homes and forced tourists and locals to flee. (Photo by ANGELOS TZORTZINIS)

Greece: Wildfires devastate as government policy and inaction is exposed

As of 12 August, over 1,160 km² have been burnt in Greece, with active wildfires still threatening more virgin forests and villages as this article is being written. The first days of August saw hundreds of fires all over the world, in most continents, but in Europe in particular where in Turkey, Greece, Cyprus and Italy wildfires seem to have been raging for days or weeks, with temperatures soaring significantly higher than usual and for a prolonged time. These heat waves ravaging many Mediterranean countries are part of the phenomenon of rising global temperatures due to greenhouse gas emissions and this now means a rapidly increasing risk of fires all over the globe.

In Greece, the biggest destruction thus far has been in northern Evia, Greece’s second largest island, where flames engulfed thousands of squared metres of forest land, but have also devastated the lives of thousands as their homes, businesses, farms and livestock, bees and beehives did not survive the fire that started on 3 August and was out of control for over a week. Entire villages were evacuated and thousands of firefighters, volunteers and local residents mounted a battle against the wildfires while three other large fires were decimating other areas in the country, one in the north-west outskirts of Athens and two in the Peloponnese.

What was evident from the start was the fact that the fire department in Greece, but above all the forestry authorities, despite putting up a heroic and impressive battle, were not enough or properly equipped. More concretely, Greece faces forest fires every summer, only in 2018 one hundred people died when a nightmarish wildfire in Mati trapped them in their homes and cars and incinerated everything down to the coastline. However, Greek authorities are always under-resourced and inadequately prepared to deal with the wildfires that we know will only be getting worse due to the acute global warming.

More concretely, the forestry authorities asked the government for a minimum of €17.7 million in order to get sufficient equipment, repair damaged firefighting aircrafts and trucks, create fire-breaks and lanes and so on. Instead Mitsotakis’s government only assigned a paltry €1.7 million to them, while also not hiring the 4,000 firefighters they had promised, i.e. in Greece right now there are 4,000 unfilled vacancies for firefighting posts. There are journalists that estimate that €1.1 billion has been taken away from fire protection between 2010-2020. Yet, the government is trying to hide behind global warming and pretend they did everything they could when last year alone they managed to find hundreds of millions of euros to compensate the ship companies and developers for pandemic related losses.

During the first days of the wild fires, especially in Evia, local residents were complaining that there were no sinouks and canadairs (both types of aircrafts used for mass scale fire extinguishing), of which Greece supposedly owns several. The authorities were quick to dismiss such claims, but it turned out that a big part of the fleet was either too old or had suffered damages that the relevant authorities could not afford to repair. In fact, eyewitnesses insist that it was due to local residents self-organising, getting together in solidarity with each other, that most defence against the fires happened. A feeling of disillusionment and abandonment by the state is very prevalent among people in Greece the last couple weeks, and for the first time a TV channel gave voice to the fire victims live, unedited shots and interviews where the anger against the authorities could not be masked.

All the while, government officials are patting themselves on the back and are making insulting statements, such as claiming that no life has been lost; ignoring the brave volunteer who died on the 6 August in the fires outside Athens, the countless animals that perished and the habitats and biodiversity that have been destroyed. They are also very proud of the ‘emergency evacuations’ they ordered, which of course does not constitute a policy of tackling wildfires, but a last resort when the fires cannot be controlled. And last but not least, in a smoke-and-mirrors attempt to shift attention away from their criminal negligence and stripping the fire department and forestry authorities of resources, they proceeded to reshuffle the cabinet: they are under the mistaken impression that people will not recognise that it is their policies that are at the heart of the problem.

Mitsotakis’s government has managed, in the last year, to make Greece the first among the NATO countries in military armament, and has bought thousands of new police vehicles and hired thousands of new police personnel to ‘protect’ universities. It has wasted over €35 million to pay private TV channels and over €300 million to the company that manages Athens airport, to give two examples. And yet it failed to repair basic, essential fire equipment and actually fired seasonal firefighters (people who are normally employed for the months of the fire-risk season) because they supposedly could not afford them.

This is the same government that last autumn left ambulance workers unpaid for months and refused to renew hospital staff contracts in the middle of the Covid-19 pandemic. It is the same government that is increasing the minimum wage by an insulting 50 cent per day, while on the other hand legalising ten-hour work days. It is the same government that has promised to provide assistance (financial and otherwise) to the victims of the fires, yet the solidarity and assistance shown by the local, neighbouring and broader working-class communities in Greece has been significantly more prompt, and has ensured that people were given shelter, food and other essentials immediately. Meanwhile the government couldn’t even ensure that people wouldn’t be asked to pay boat fares while fleeing with their homes behind ablaze.

The reality in Greece is that years of austerity measures have dangerously defunded vital services, under-resourced and understaffed bodies with personnel that haven’t been trained or retrained in years — with incomplete forest maps and ageing and damaged equipment which are expected to prevent, protect from and ultimately put out savage wildfires. Not to mention that the responsibility for forest fire management was taken away from the forestry authorities over 20 years ago and given to the fire department who are trained in dealing with fires and disasters in completely different settings.

It is now becoming evident that wildfires are going to be more common and destructive than before given that environmental conditions have changed dramatically and unfortunately irreversibly. The constant undermining of forest land in favour of development, construction and mining needs to be stopped, with those industries nationalised under workers’ control, and priority given to tackling climate change overall. But as an immediate measure proper investment in fully trained personnel and working equipment needs to be implemented with urgency — filling the 4,000 aforementioned vacancies but also training and assisting (with whatever financial resources necessary) local communities most at risk. And crucially, ensuring that no burnt forest land is allowed to be used by developers and speculators who no doubt have their sights on profiting from this crisis.