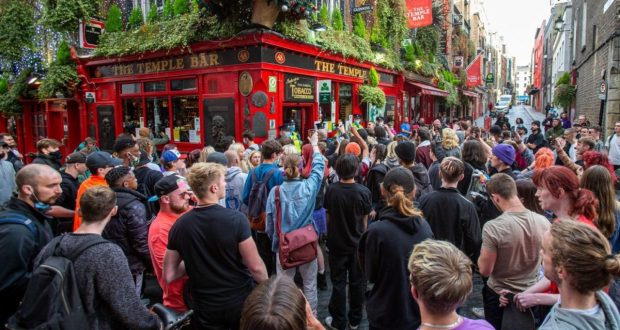 Readers may be familiar with the events of 28 July, where an alleged assault of two teenage skateboarders by door staff of the Temple Bar pub took place. Video footage circulated online capturing the event, which resulted in mass indignation within the skateboard community in Dublin and with young people more broadly.

Various reports indicate that the alleged assault occurred after the teenagers had been mocked by bouncers at The Temple Bar for skateboarding. The macho bullying and harassment, which culminated in serious physical violence, roused a deep wave of anger that led to several protests outside the pub, with chants of “Come Out and Say Sorry” bellowing from crowds of hundreds of skateboarders and supporters.

One can’t help deducing that although the assault on the teenagers was reprehensible, there is more at play here. The Temple Bar is widely reviled by young people who live in Dublin, and there’s arguably no bar that receives the degree of resentment from local Dubliners as it does. The Temple Bar is in many ways the epitome of gentrification in Dublin City Centre and is renowned for its rip-off prices. The unrelenting process of gentrification and the removal of public space from Dublin City Centre is likely part of a deeper dynamic here.

There has been a visible uptake in skateboarding in Dublin in recent years. One skateboarder, Evan “Minte” Fogarty, explained at one of the protests that skateboarding is an outlet for young people who may not be interested in mainstream sports but find in skateboarding a skill and a passion that is both enjoyable and meaningful. This is due to the activity of skating itself, but also from the sense of community that is built up through the common love of the sport and culture around it. Furthermore, the community is an escape from the alienation and mundanity of everyday, overpriced life in a gentrified city.

Fogarty later went on to comment on how skateboarding is a release from mental anguish that many skaters in Dublin experience. He developed the point that no mental health services are available for young people in dire need of them, and what you have instead is young people experiencing “negativity, anger, shame and violence” at the hands of the establishment in this country. For the skaters protesting over the last week, the Temple Bar is symbolic of a section of the Irish establishment.

The power of solidarity

The importance of the protests can be measured and understood in various ways. For a whole community of young people, these protests symbolise a coming-together in solidarity against the mistreatment of their friends. In various videos capturing the protests outside The Temple Bar, the word “solidarity” itself is frequently used and is striking.

For many of the protestors, some of whom are in their early teens, this event may have marked their first experience protesting and coming together with others to stand against an injustice. One can imagine that this experience could be a radicalising one for those young protestors and may deepen their sense and understanding of the ideas of solidarity and the importance of the idea that “an injury to one is an injury to all”.

There are important lessons from this experience for the skating community in Dublin. They should maintain their protests demanding a simple apology from The Temple Bar, but why stop at that? There are plenty of protest targets for the skateboarding community in Dublin to organise against, for example Dublin City Council. And there are plenty of other issues to organise around, for example more public spaces and investment in skateparks and other facilities for young people.

Young skaters should take from this experience the need to get active against the institutions of power that are hellbent on privatising more and more of the city’s space. Whenever people come together in struggle they have the potential to uplift themselves and push-back against the conservative forces that wield power in capitalist society.