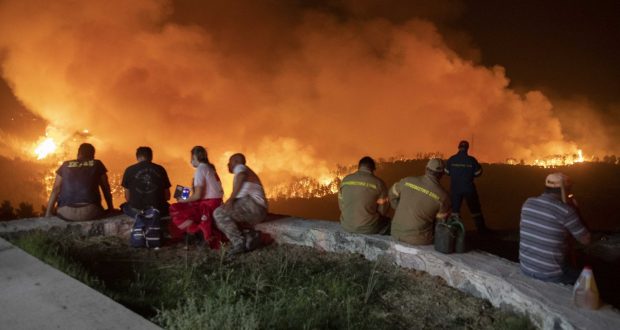 The latest report on climate change has been released to the accompaniment of terrible fires and floods around the world. It contains the most urgent warnings to date concerning the scale of the disaster we face.

Yet there’s a lot of confusion about the real causes of climate disaster. Here are two headlines from The Guardian over the last few days:

Climate change is not a ‘crime of humanity.’ It’s a crime against humanity. Most carbon emissions and pollution are created by a tiny number of corporations over whom we have no ownership, control or say.

Capitalists are the real culprits

The super-wealthy minority of the world’s population similarly has a much bigger carbon footprint than the rest of us – their private jets emit between five and 14 times as much carbon as commercial flights for example.

But the main problem is that they — the capitalist class — own and control so much wealth and decide where it’s invested, in other words, they control the economy. That these decisions affect us all is most obvious in the case of global warming. But none of us get a say in these decisions. We’ve all known about global warming for decades now, and they have continued (and are continuing) to invest in destructive fossil fuels, between 2015 to 2021 the world’s 60 largest banks invested $3.8 trillion in these companies. This is because it’s more profitable than alternatives in the form of renewable energy. Paying for greenwashing PR is cheaper than actually making changes.

One iteration of the idea that ‘humanity’ is responsible for climate change, which has been widely purported online in the last week, is the claim that there are too many people on the planet, or that these people are consuming too much. It is claimed that this will lead not only to climate change, but to a breakdown of food supplies and complete societal collapse.

Of course, we could list many examples of how we are consuming resources in an unsustainable way that will lead to crises: land use, plastics, pollution, waste disposal, acid in the oceans, etc. But these examples do not prove that there are too many people, or that the existing people are consuming ‘too much.’

The above examples actually show that we have a whole load of systems in place that are unnecessarily wasteful, that are irrational and absurd, all because they are set up for private profit and not public good.

A system of waste

Take the example of plastic water bottles. It takes four times more water to produce the bottle than the bottle actually contains! This is an incredible waste. But people wouldn’t buy these plastic bottles if the water in the places where they work, study, and live was healthy, free and easily accessible. Initiatives along these lines have been launched in Paris, for example.

Moving on to the bigger example of fossil fuels, people wouldn’t have bought all those Diesel cars if the auto companies hadn’t lied about their emissions. And people would use fewer cars if, like in Dunkirk and Tallinn, public transport was free and high-quality.

The reality is that most countries in Africa, Asia and Latin America have been kept underdeveloped by capitalism, and the people there need to get to a position where they are consuming more, not less. Anyone who concludes from the climate crisis that the hungry (who exist in virtually every country) have to cut their consumption needs to take another look at their reasoning.

Not a question of numbers

The number of people is far less important than how those people are organised. Even if the world’s population was half of what it is, but we still had capitalism and burned fossil fuels for profit, we would be on the same track to the same climate catastrophe. On the other hand, the earth could sustain a lot more than the current seven billion people, and put an end to hunger, poverty and underdevelopment, provided we develop a sustainable relationship with nature — via a democratically, socialist planned economy.

Such a system would be based on public ownership of the major food companies and agribusinesses, and super-markets that distribute this food. Workers and small farmers could be the heart of a plan that ensures that healthy food is produced and distributed in a sustainable and equitable fashion. The days of the notorious “butter mountains” could be put to an end and the waste of plastics could be gotten rid of.

For most of human history, the population of the earth was very low. When humans stopped being hunter-gatherers and settled down to farming, our population boomed. Under agricultural social systems like feudalism, 200-500 million human lives could be sustained on earth. Two hundred and fifty years ago, the planet’s population was still way under a billion.

The advance from feudalism to capitalism (which involved vast brutality and displacement, political revolutions and rapid technological change) allowed for much greater productivity of labour and so for more life to flourish. Now capitalism has long since reached its limits and brought about the climate catastrophe. But as before in history, an advance to a more productive and efficient society could open up new potential to progress the advancement of human civilisation.

A socialist world is needed

Technological innovation can offer climate solutions – but only as one dynamic element of revolutionary social and political change that takes the political and economic power out of the hands of the rich and big business, and allows investment decisions to be made democratically for the public good, now and into the future.

As for the supposed crimes of humanity against the climate, ‘humanity’ never had means, motive or opportunity. The majority of people – in the form of the working-class, poor and oppressed – are the solution, not the problem. The economy is run by the private, short-term profit motives of super-rich people, banks and corporations. They are not run in the interests of human need. They answer to super-wealthy shareholders, not to ‘humanity.’ That’s why it continues to destroy the environment, even after 30 years of dire warnings.

We cannot allow or afford for these forces to continue their destructive exploitation of the majority of humanity and nature, it must end now. The resources and technology that are imprisoned in their private hands, must be seized and democratically and publicly owned in the interests of all. This is the socialist world we need and must struggle for today.