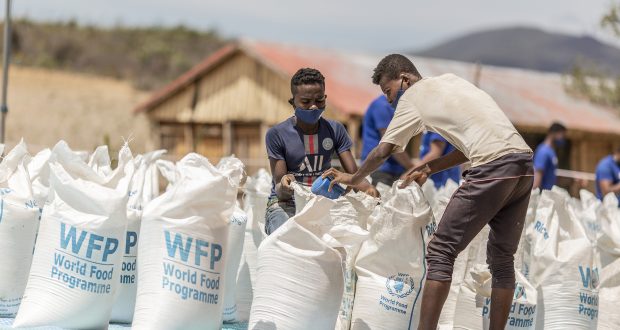 The Covid crisis, reflecting the existing global inequalities of capitalism, hit the Global South, particularly sub-Saharan Africa, with extreme severity. What measly healthcare infrastructure was available crumbled in the face of the virus.

The economic impact of the crisis has been even greater, and the lack of social safety nets – as limited as they are in Western Europe or North America – has generated a social catastrophe. South Africa, with the most industrialised economy in Africa, recorded an unemployment rate of 43.2%. An ardent defender of the capitalist system, the World Bank reported that in 2020, extreme poverty – subsisting on less than $1.90 a day – had risen for the first time since 1998.

These problems are in many cases added to by local armed conflicts and drought. The armed conflicts are a consequence of the divisions and partitions fostered by the imperialist powers, historically, while the droughts are the product of the ecological destructiveness of capitalist production. As a result, the spectre of hunger, food shortage and famine is hanging over much of the continent.

In Ethiopia where these crises are added to by armed conflict between the central government and the Tigray People’s Liberation Front (TPLF), 401,000 people are expected to face “catastrophic conditions” of food insecurity by September. This is the highest figure for a single country since famine hit Somalia in 2011.

In Madagascar, particularly in the south of the island, people are suffering from the effects of the worst drought in 40 years; this being the third consecutive year of drought and sandstorms, with 14,000 already facing famine conditions, a figure with the potential to rise to a million. As early as April this year, there had been reports of people in Madagascar having to resort to foraging as food sources became unavailable, while the United Nations World Food Program (WFP) had been warning of hunger since back in January.

“Famine-like conditions” are also reported by the WFP in South Sudan, and parts of Nigeria and Burkina Faso. In South Africa, which was a historically more food-secure country in the region, one survey conducted saw over 40% of respondents saying they had to go hungry at various points in 2020 due to income lost as a result of Covid.

However, the masses of sub-Saharan Africa are not as helpless as they are often presented by “humanitarian” groups in the advanced-capitalist world. Despite the pandemic, hunger and social crisis, they have and will continue to revolt against the misery imposed on them by imperialist powers and their local Satraps, as seen in the likes of South Africa, Eswatini and Nigeria. The conditions that capitalism creates, even the most miserable, will invariably compel a fightback against those same conditions.

In a capitalist system which means climate catastrophe, and with that, increasing food prices – already a massive issue in the neocolonial world – as well as more general economic crisis and precarity, this has the potential to be the music of the future. This is despite the fact that there is already enough food produced, globally, to feed ten billion people. But as capitalism’s decline becomes increasingly destructive, the working class and oppressed groups will come more and more often into conflict with this system that threatens a new dark age for humanity.

A democratic socialist transformation of society is needed; this means the public ownership, planning and democratic allocation of the resources of society. This could feed ten billion people by planning the economy on the basis of social need, not private profit.