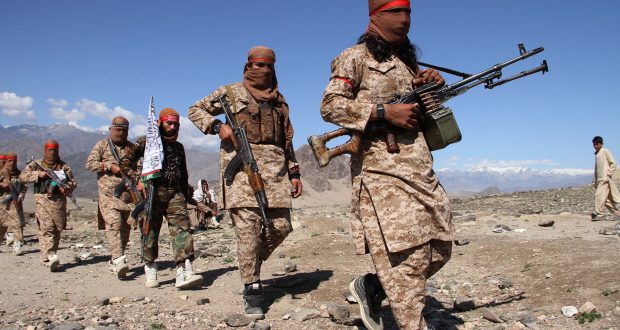 Another disaster caused by imperialism: Taliban close to taking over in Afghanistan?

By Arne Johansson, ISA in Sweden

[Since the article was written, 3 August, the Taliban has taken control of the provincial capital Kunduz.]

After almost 20 years of counterproductive war, the United States’ rapid withdrawal from Afghanistan means that the country is about to be tipped back into the hands of the Taliban. A negotiated solution with the long-time Western-backed regime in Kabul today seems increasingly unlikely.

Close diplomatic contacts between the Taliban and the surrounding regimes in China, Russia and Pakistan also show who they expect to win. Thus, Afghanistan’s women and young people, not least the thousands of young refugees who have been deported to their home country from Sweden and other European countries, have strong reasons to fear a new era of religious oppression.

US planes are still bombing the country. But since almost all troops in the US-led NATO Resolute Support Mission (in which even a small group of Swedish military advisors have participated since the Swedish military ISAF mission was phased out) have today left Afghanistan, the Taliban has, over the course of the summer, increased its control from a quarter to more than half of Afghanistan’s districts.

Sometimes after bloody battles, but often after agreements between local Afghan clan leaders.

At Bagram Air Base, which was the United States’ main base, Afghan scrap dealers today pick up leftover material from US military equipment that was hastily abandoned.

According to the Swedish Migration Agency’s “Country Report”, around 223 of 400 Afghan districts had already been occupied by the Taliban movement by 16 July.

And the Taliban’s advance has continued since then, both in the northern areas previously controlled by the so-called Northern Alliance and in rural areas throughout the country. Important border crossings in the west and south to Iran and Pakistan have now also been taken.

The latter is precisely where the US and British war against the Taliban had previously been most intense. There is ongoing fighting right now inside the city centre, at the same time as power outages are taking place and telephone networks have been shut down. The hospitals are overwhelmed. There is no medicine, and the pharmacies are closed, reports a witness in the currently most heavily besieged provincial capital.

“Airplanes bomb every minute. Every inch of the city has been bombed. Dead bodies lie on the streets and in the square”, according to another man quoted by Agence France-Presse.

General Ajmal Omar Shinwari, spokesperson for the Afghan military, also described the situation in the three provinces as “an emergency”. The fall of Kandahar and Lashkar Gah would secure Taliban control of five surrounding provinces.

The attacked cities are also the capital of those provinces that account for the lion’s share of the poppy fields that supply the world’s heroin trade with opium.

“We want peace, but they want us to give up” — President Ashraf Ghani said at a government meeting.

Helene Lackenbauer at the Swedish Defence Research Agency also predicts that the Taliban will sooner or later take over the whole or most of the country. She believes that the current government in Afghanistan will then quickly choose to leave the country. “Corruption is high and they possess wealth that means they do not have to stay, but it will be an even greater humanitarian catastrophe”, says Lackenbauer.

As the Australian Afghanistan expert, Nishank Motwani, has pointed out, the fall of Afghan cities will be a huge loss of prestige for the United States, which would be embarrassed by having “abandoned the most pro-American government in the region to radical Islamists”.

When US President, Joe Biden, was pressured about the consequences of the expedition, he replied that “Nearly 20 years of experience has shown us that the current security situation only confirms that ‘just one more year’ of fighting in Afghanistan is not a solution but a recipe for being there indefinitely. […] And it’s the right and the responsibility of the Afghan people alone to decide their future and how they want to run their country.”

The original motivation for the US war in Afghanistan — al-Qaeda’s attack on the World Trade Center in 2001 — was, from the beginning, as misguided as it was catastrophic. Despite 20 years of war, in which 800,000 US soldiers have taken part, of which 20,000 have been injured and 2,300 of them killed, along with 50,000 Afghan civilians, the Taliban seem to be pulling the strings.

It would, in all likelihood, also mean new humanitarian refugee disasters. According to the UN, this year’s fighting has already created 330,000 new internally displaced people in the country, something that could be many times worse if big cities were to fall as well. The Swedish Migration Agency also today expects new refugee waves in Europe as well.

The Swedish Afghanistan Committee says that they, so far, have been able to continue their humanitarian work even in some Taliban-controlled areas, and they hope, against their better judgement, for a more civilised resolution than previously.

“There has been a tolerance for education of especially younger girls, but in practice it is still difficult to educate older girls, teenagers and upwards”, says the committee’s adviser, Klas Bjurström.

The most important but extremely costly lesson for Afghanistan and all the oppressed peoples of the world is that they have nothing to gain by relying on the support of either the United States or any of the world’s rival imperialist powers. It is up to Afghanistan’s own workers, women and young people to resume a struggle for social, democratic, national and religious liberation which, in order to win, must become socialist — in a global alliance with workers and oppressed people in all countries.

The question is when and how the bill will be demanded by the political establishment in the United States, other NATO countries and also in Sweden, which is responsible for this disaster? The most immediate thing that must be demanded is, of course, an apology and an immediate decision that gives full residence and restitution to the Afghan refugee youths in Sweden that Sweden’s rulers have for so long trampled on.