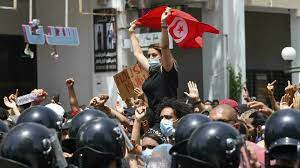 Just over ten years since the popular uprising forced Tunisian dictator Ben Ali from power, new convulsions are rocking the country. Now the President has dismissed the government and frozen Parliament for 30 days.

Late on Sunday, 25 July, Tunisia’s President, Kaïs Saïed, took the unilateral decision to suspend the Parliament, sack the government in office and announce he will temporarily rule by decree. This is an unprecedented move since the 2011 revolution that toppled the dictatorial regime of Zine El Abidine Ben Ali, marking a dramatic escalation of the chronic political instability that has affected Tunisian capitalism ever since.

Importantly, this decision came about on the same day as thousands of people demonstrated in many cities across the country to demand the fall of the government.

The dominant force in the parliament and government, the right-wing Islamist party Ennahda, was in the firing line of these protests, with several of its local offices ransacked or burnt down. But discontent is rumbling against the whole political establishment, as the country is experiencing a combined and mutually aggravating chain of crises that has been exacerbated by the Covid-19 pandemic.

For months, political infighting at the top of the state has been on open display, with a public showdown between the President, the Prime Minister Hichem Mechichi and the speaker of parliament Rached Ghannouchi. This is taking place against the background of the country’s economy having been battered by the effects of the pandemic and of last year’s brutal contraction — generating hundreds of thousands of job losses, the collapse of the crucial tourism sector, and pronounced rises in the price of consumer goods.

It is on this already explosive cocktail that a new, brutal wave of Covid-19 infections has emerged since May. This is no natural phenomenon; today, Tunisia spends 5% of total government spending on public health, while it spends 38% on defense. This third Covid wave has graphically laid bare the criminal neglect of the health sector after years of neo-liberal cuts, especially in the most impoverished inland regions — and the sheer unpreparedness of the ruling class. Videos have circulated on social media showing dead bodies left in the middle of hospital wards, as morgues cannot deal with the growing number of deaths.

Tunisia is now experiencing the highest death rate from Covid-19 of both Africa and the Arab world, having officially recorded more than 18,000 deaths out of a population of about 12 million. The mismanagement of the pandemic has itself become an increasingly politicised issue that has turned the tide further against an already deeply unpopular government, ridden with crisis from day one. Some weeks ago in Kairouan, one of the most affected areas, protests broke out demanding the fall of the local governor for mishandling the health crisis. Last week, the national health minister was sacked — the fourth since the pandemic began.

No support for Kaïs Saïed’s power-grab

Considering the widespread rejection of government and parliament alike, Kaïs Saïed’s recent move has been welcomed by a significant layer of people on the streets. As Tayaar al’Amael al’Qaaedii (ISA in Tunisia) commented then, the election of this populist law professor at the head of the Presidency in the autumn of 2019 was the expression of a strong anti-elite, anti-establishment and anti-party mood, particularly among young people.

Assisted, for now, by the army and significant sections of the state machine, his latest move is an attempt to end political instability through authoritarian means. He wants to take advantage of the momentous anger that had developed against the Ennahda-backed ruling coalition in order to cut the wings of a competing power centre around the Islamist party by positioning himself as on the side of “the people”, arguably undertaking a break with the rest of an establishment that is largely perceived as rotten, corrupt and ineffective. Understandably, Saïed’s decision to rescind parliamentary immunity, and his threat to subject corrupt MP’s to the law “despite their wealth and positions”, is met with a certain degree of popular approval.

The truth, however, is that none of the main contenders in this unfolding political drama have any solution to the problems affecting the majority of the population. Of course, socialists unconditionally opposed the deposed governmental coalition. Like all the eleven coalitions that have preceded it since the fall of Ben Ali, it has been perpetuating the same anti-poor and anti-worker policies that were held under the old regime, and have cyclically brought the masses back into the streets. But no trust can be given to any “providential man”, let alone one that has demonstrated he has no serious alternative to counterpose to the failed system of capitalism and imperialism within which all post-Ben Ali governments have operated.

In his speech on Sunday, Saïed evoked the need for a return to “social peace” and for “saving the state” — not for providing support to the millions of families in need, giving jobs to the unemployed, repudiating the public debt, accelerating the sluggish pace of Covid vaccination, investing in public healthcare or nationalising private hospitals. Despite his anti-corruption stance, Saïed has done nothing to challenge the vested interests of the local bourgeoisie and of imperialist institutions like the IMF, who are trying to impose mass poverty programs in the midst of a global pandemic — as exemplified by the late government’s recent cuts to food and fuel subsidies, which Saïed has not piped a word against. He has even on occasions threatened to send the army against workers on strike, and befriended utterly reactionary and anti-working class regimes abroad, such as the ruthless Saudi and Egyptian dictatorships.

Revolutionary activists, young people and workers cannot support Saïed’s anti-democratic move. While it today appears to be mostly directed at unpopular politicians, it already contains measures aimed at preventing the masses from putting their stamps on events — such as the ban on the gathering of more than three people on public roads and public squares. Normalising the deployment of the army in the streets, as has been done to surround state buildings and prevent MP’s from entering the Parliament, will serve to intimidate or break up genuine protests from workers and youth tomorrow.

Saïed’s move has a pre-emptive character: like many in the ruling class, he is very conscious that the entire post-Ben Ali regime, constructed upon the continued exploitation of the majority by a super-rich and corrupt elite, is lying on a powder keg that could lead to new social explosions down the line. A report published last month by the Tunisian Forum for Economic and Social Rights shows that the number of protest movements in the country has doubled in May 2021 compared to May 2020. From that angle, Saïed’s power-grab can be seen as a manoeuvre from the top to forestall the masses from doing the job of overthrowing the government by their own struggle.

As the saying goes, “show me your friends and I will show who you are”. Among those who have been supportive of Saïed’s measures is the Free Destourian Party — a party that feeds on open nostalgia for Ben Ali’s dictatorship and strong opposition to the 2011 revolution, which it refers to as a “coup” and “conspiracy”. The irony of a President who, during his electoral campaign, had been stressing the need for radical participative democracy ending up concentrating power in his own hands, should be lost to no one. This shows the impasse of promising change within the confines of a system that is structurally rigged in favour of a handful of super-rich families, multinational corporations and large creditors who profit from their control over the key levers of the Tunisian economy.

The President’s removal of Prime Minister Mechichi, who was also in charge of the interior ministry, and his replacement with the head of the presidential guard, is a straightforward attempt by Saïed to consolidate his support within the police force, whose widespread abuse and repeated acts of brutality against poor and young people has been a prominent flashpoint for social rage to burst into the open in recent months. The storming of Al Jazeera’s bureau in the capital Tunis on Monday by plain-clothed police officers, apparently greenlighted by instructions from above, shows that Saïed’s move, if not met with a strong response from the workers’ and revolutionary movement, could set the scene for a dangerous escalation of anti-democratic measures.

Of course, this should not mean that any inch of support should be given to parties like Ennahda, whose leaders are now using hypocritical phraseology around the “defense of the revolution” and of “democracy” against Saïed’s constitutional coup — while having themselves carried out vicious reactionary attacks against the revolution and democratic rights all through the governments they have been part of, most notoriously between 2011 and 2013.

Unfortunately, but not surprisingly, in the face of the severe, months-long political crisis affecting the country’s institutions, the leadership of the powerful UGTT (General Union of Tunisian Workers) has found nothing better over the last few months than making renewed proposals for a “national dialogue” between all political parties. This is while these parties, following the footsteps of all successive governments since Ben Ali’s overthrow, have offered nothing but an agenda of class war against the majority: privatisation of state-owned companies, compression of public sector wages, removal of subsidies, currency devaluations, sale of agricultural land to foreign multinationals, cuts to public services and more.

Instead of trying to put the broken pieces of the capitalist political puzzle back together again, the role of the labour movement should be to build a genuine and independent political alternative based on the interests of the working class, the poor farmers, the unemployed youth and the populations of the marginalised regions. Since Sunday however, the union central bureaucrats have not only failed to condemn Saïed’s power grab but have even come out in support of it, as long as there are guarantees that these exceptional measures will be “limited” and “respectful of the constitution”. This leaves workers in a position of spectators in the face of the political battle currently being played out between different wings of the ruling class.

To fulfill the demands of their unfinished revolution, the working class and the revolutionary masses cannot rely on either of the opposing pro-capitalist camps; they should rely on their own forces, using their own methods of struggle, and putting their own demands to the fore — as they did to overthrow Ben Ali’s regime ten years ago. Setting up local committees of action in the workplaces and neighbourhoods to discuss the current situation and build a mass mobilisation on their own terms would be a very good way to start. But for their heroic efforts of the past decade not to have been made in vain, they also urgently need to come together to build their own political alternative: a mass force dedicated to ending the capitalist onslaught on their lives and livelihoods, and fighting for the revolutionary socialist transformation of society.