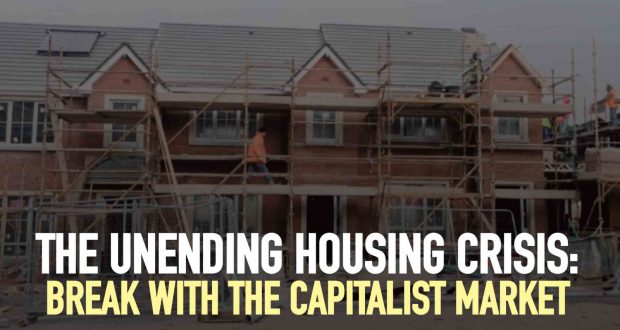 The housing crisis is the most urgent issue facing young people today. Two generations face a housing market where homeownership is a fantasy and the ability to rent extortionately priced housing is beyond many people’s grasp. This is fuelled by a feckless political establishment beholden to landlords, speculators and vulture funds.

“Build to Rent” developments by investment funds, coupled with the government’s refusal to intervene to stem landlord profits have helped create widespread unaffordability. In general, cities are becoming more expensive and gentrified internationally.

Ireland now ranks second highest in the EU for cost of goods and services. The Global Liveability Index 2021 which tracks the living standards of 140 countries saw Ireland drop 22 places in just six months of this year alone. With renters on average paying 40% of their wages on rent, it’s clear this is no country for young people.

Tenants may face rent increases of up to 8% when the temporary ban on rent freezes expires. While the government has stated this was an unintended loophole, indications are that protections provided within fast-tracked legislation will be limited.

The housing crisis is the culmination of decades of neoliberal policies of housing spearheaded by Fianna Fáil, Fine Gael, Greens and Labour and of a system that makes a home a profit-making commodity rather than a right.

The government’s insistence on almost total reliance on the private market to provide housing has consistently failed. We were reminded of this when thousands protested on 15 June this year seeking redress over the Mica scandal. As a result of companies cutting costs years ago, homes are literally crumbling.

A movement is necessary to demand an end to evictions and real rent controls with powers to significantly reduce and freeze rents to levels that are affordable. Only a massive public housing programme can answer the crisis by providing quality affordable homes for all, to rent or to buy. This means rejecting the capitalist framework that views housing as a commodity and not a right.

The housing crisis, alongside stagnant wages and precarious work, continues to fuel the widening discontent of young people. Ireland’s capitalist establishment faces a generation of young people unable to meet their most basic aspirations in an increasingly unaffordable society.

Many of them will conclude we need to break with the system that has bred so much inequality.

Only a socialist transformation of society can wrench power away from the 1% who continue to consolidate enormous amounts of wealth. According to Oxfam, the 10 wealthiest men increased their wealth by $540 billion during the pandemic. The same report estimated up to 500 million more people in poverty in 2020.

The housing crisis is an inevitable symptom of a system designed to be unequal. The Socialist Party argues to end that system and take the wealth and power out of the hands of the landlords, builders, and developers whose greed is undermining our right to a roof over our head. Join and help us create a world where wealth and resources are in public ownership and democratically organised to meet the needs of people and the planet.