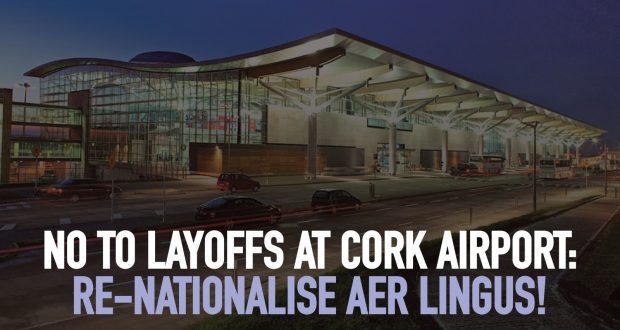 Hundreds of workers are facing temporary layoff in September when Cork Airport shuts for runway repairs. Aer Lingus has announced plans to lay off 198 workers and other big airport employers like OCS and Swissport may take a similar stance.

This is even though Aer Lingus and others have received large amounts of state funding during the pandemic, including the EWSS which is specifically provided so that workers can be kept on the payroll.

Workers’ fears about layoffs are many and varied.

Because job seekers are means-tested many workers with working partners will receive no payments whatsoever. Because workers have been on reduced payments during Covid many face being placed on reduced benefits. The layoffs will mean a break in pensions too.

Although it is not legal for airport employers to unilaterally change workers’ pay and conditions many workers justly fear that employers will use the layoffs to make it more difficult for workers to resist downward pressure on wages and conditions.

The State should at a minimum insist that companies in receipt of EWSS and other pandemic supports keep workers on the books.

Aviation workers have suffered very badly during the pandemic. They are the victims of the cruel logic of the capitalist market where are our rights and living standards are dispensable. They have been forced to survive on a fraction of their pay and with a big black cloud hanging over the future of their industry.

They naturally fear for the future of their jobs, for their mortgages, and in many cases for their own mental health and that of their work colleagues. Any stand they take to defend their conditions deserves the support of every worker in the country and beyond.

I have been vocal in raising this issue in the Dáil and workers have taken the initiative to put Government TDs under pressure by inviting them to a zoom meeting.

If these Ministers were prepared to lift their little fingers the immediate issue would be resolved, and workers kept on the books. It is a disgrace that they have failed to do so to date, and workers must consider what actions might be taken to increase the pressure on them.

Workers must not allow fear and anxiety to force them to go quietly to the slaughter. Difficult as it may sound, plans need to be made for co-ordinated workers’ actions to resist these attacks.

The reopening of international travel from 19 July will strengthen workers’ bargaining position albeit from a weak and very difficult starting point. Pressure needs to be brought to bear on the airport trade unions to start taking a far more proactive stance on the issues.

Furthermore, there needs to be a growing realisation that for profit aviation in a squeezed industry can only add up to heartache for aviation workers.

The idea of breaking with the for-profit aviation model needs to be popularised and a workers’ campaign for the renationalisation of Aer Lingus, with workers at the heart of management, needs to be discussed. This should be linked to the question of democratic public ownership of all job shedding companies and services in this industry.

With the closure of Cork Airport scheduled for 12 September-22-November, the fight to keep the workers on the books here can be an important part of pushing back against the anti-worker agenda of the bosses in aviation.