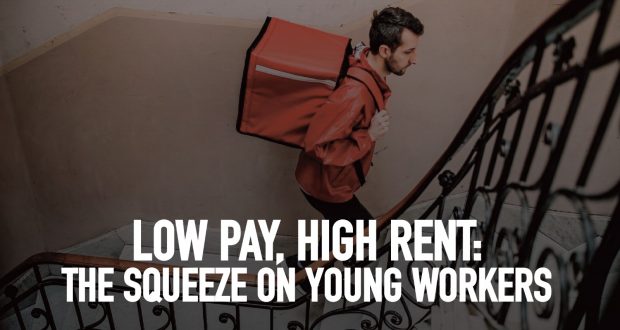 With society slowly reopening, and with the threat of the Delta variant very present, young workers who have not yet been vaccinated face the most risks to their health as they are forced to return to the workplace. They also still face low wages and high rents, long shifts, and short breaks, and cuts to the PUP for those not able to return to work.

Minimum wage and cost of living

As of January 2021, the minimum wage in Ireland stands at €10.20 per hour for those aged 20+, €9.18 for those aged 19, €8.16 for those aged 18, and €7.14 for those under 18. These arbitrary rates are themselves examples of discrimination against young people – being paid less for the same work. They should be abolished and all workers paid the same, regardless of age. An 18 or 19-year-old still pay the same prices as everyone else!

The average rent per month is somewhere around €1,256 (in Dublin this rate can double or more). This figure excludes heating and electricity, food, and any other bills. The average earning of someone aged 18-20 working full time (39 hours) is currently €358.02 per week, or €1551.42 per month. So after rent, they would be left with only €295.42 for any other necessities.

This government of bosses and landlords expects people to work just to exist, but not actually live. Young workers deserve better.

PUP and return to work

Over the course of the pandemic, many people have been relying on the Pandemic Unemployment Payment (PUP). While the PUP has undoubtedly helped many people for more than a year now, the state has made it clear that it will not last. Young people are going to have to return to work or try to survive on the measly Jobseeker’s Allowance, which is also worse for those under 25 – at €112.70 per week!

The PUP of €350 should be the standard rate for all ‘Jobseekers’, because anything less than means poverty – which has been inadvertently admitted by the government. If some people, mostly young, also realise that they’re better off being paid by the PUP rather than their own wages, it’s because they’re being paid poverty wages!

A response to this that would make life even a small bit easier would be the introduction of a €15 an hour minimum wage, with no exemptions. Guaranteed hours and shifts so workers can know for sure what they’ll earn, and be able to manage their finances accordingly, is also necessary.

Even prior to the pandemic young people were at the bottom of the pit when it comes to employment and wages – often being used as cheap and disposable labour. This issue is so impactful that it has meant that the millennial and Gen Z generations are the first generations to be worse off than the preceding ones, and it’s only going one way. We need to stand against capitalism and its exploitation, not just for us but for generations to come.