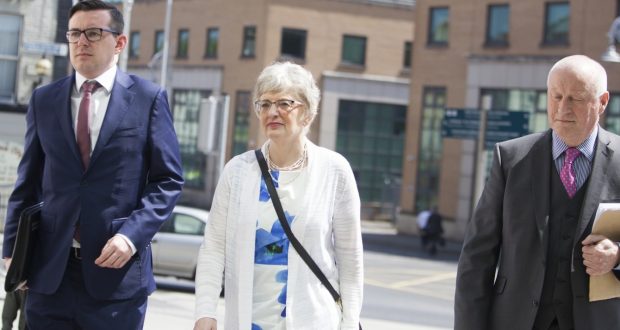 Zappone entering court in 2017 to testify in Jobstown trial.

What Ireland lacks in a UK system of honours, knighthoods and peerages is made up for in some measure by government appointments of their favourites to various paid statutory, board and ad hoc paying positions. Katherine Zappone’s appointment as ‘special envoy for freedom of expression’, a part-time UN position that will probably on average take up not even a few hours a week at €15,000 a year has provoked annoyance in various quarters, but for different reasons.

The mainstream media is fixated by the Taoiseach’s irritation that Simon Coveney awarded this position to Katherine Zappone on the basis of her canvassing him without first clearing it with the Taoiseach.

The more significant discontent however is that of many working-class people who recall Katherine Zappone testifying as a witness for the state during the Jobstown Trial. Her testimony was recalled for its hypocrisy because her own prior written autobiography celebrated past examples of civil disobedience.  This included the Greenham Common anti-nuclear weapon protests which involved sit down blockades akin to the Jobstown protests. However, Zappone was prepared in the witness stand to back up the state’s bogus and absurd contention that the Jobstown protest amounted to “false imprisonment” of then Tánaiste Joan Burton and her colleague, a charge, if convicted, carries a life sentence.

The fact Joan Burton was in Jobstown in the first instance arose from Katherine Zappone invitation to Burton to attend a graduation ceremony at An Cosán, much to the disapproval of most of the local graduates. The fact that Zappone could not conceive that this was a provocation, given the role Labour had played in government with Fine Gael during the harsh austerity years from 2011 to 2014, was itself a demonstration of how out of touch she was.

She paid a certain price when she lost her seat in the following general election in 2020 having by then served as a Minister in the Fine Gael government that was facilitated by Fianna Fáil. Fine Gael TD Emer Higgins and Leo Varadkar have both since sought to play down the cronyism on the basis that the position is part-time and pays only €15,000 a year minus tax. Such a sum might seem like chicken-feed to these people.  However, this misses the point of why working-class people have been rightly worked up about the appointment. The sum of €7-€8,000 after tax on top of your existing salary or welfare would be massively significant for most ordinary people.

The subtext of her approach to Simon Coveney for this position was clear, ‘you owe me!’ What we have witnessed is an example of how ‘solidarity’ exists among the capitalist establishment and how they reward their own. We must build a socialist alternative to this corrupt and rotten order, that organises working-class and young people in the struggle to bring about its overthrow.