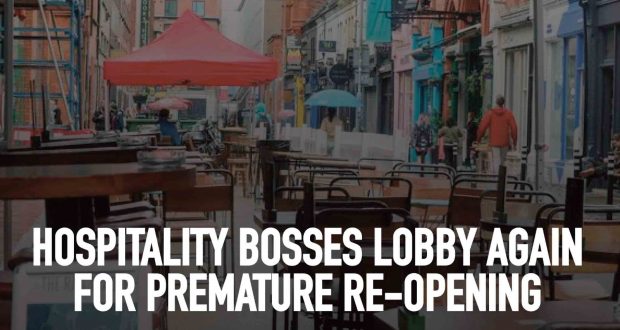 The loud voices from the hospitality lobby went into hiding in the new year. This was after the “meaningful Christmas” promised by Micheál Martin, which led to the easing of restrictions in December, contributed to skyrocketing levels of infections and the highpoint of mortality.

Six months on, these same individuals and their most ardent supporters from the Fianna Fáil and Fine Gael backbenches – as well as some right-wing independents – have returned to type, looking for the scientific evidence to be set aside. They effectively want compromises to be made on the public health front for the sake of commerce and profit.

On the surface, the current rate of vaccinations means there is a legitimate basis for a further easing of restrictions. Right now, however, the warning signs from other countries, including those whose vaccination programme is more advanced than Ireland’s, is clear – the Delta variant has the capability of engulfing the unvaccinated, still a significant cohort of the population.

Those arguing for a full reopening of indoor hospitality in general, when pressed on the matter, do not contest that there will be a resultant spike of cases. They callously reason that there will be proportionately less illness, hospitalisation, and mortality on the basis that the younger section of the population will be exposed. The reality, however, is that we could end up where Scotland is now, with cases topping 8,000 per day and a small percentage of those ending up in hospital. In an Irish context, this would put our healthcare system and healthcare staff – who have gone through hell over the last year and a half – under further strain.

The drive for a full reopening coincides with the call for young workers to be forced off the PUP and into predominantly minimum-wage jobs in the sector.  The vaccination programme is now only at the point of accepting bookings from those between the ages of 30 and 34.

All attacks on PUP must be opposed, the ban on evictions must reinstated and rents should be drastically slashed. There should be no premature re-opening of the hospitality sector, a demand that is driven by the interests of profit-hungry bosses. Workers should decide when they go back to work and how this can be done safely. They should take action to ensure this right is upheld and should be actively supported and given organised assistance by the trade union movement.

Young people in general have become more radicalised in the face oppression, environmental degradation, and the barriers put in front of them in getting on in life, in terms of secure employment and somewhere to live. The callous appeals to cut their PUP and push them into a hazardous work environment will only add to that sense of alienation and disgust.

The desire among most people, especially the young, for a rapid return to normality is completely understandable. There should be real state investment in outdoor public amenities during the summer, and complete opposition to the privatisation of public space.

There also needs to be a global perspective on this debate. The very fact we have a Delta variant is a result of Covid spiralling out of control in India among the poor. For as long as intellectual property rights are not fully set aside and vaccine production is not ramped up for rapid global inoculation, the potential for further mutations and ever more infectious variants remains. Added to this, there is also the ultimate risk of the current vaccines becoming ineffective against new strains.

Locally and globally, from hospitality to pharmaceuticals, capitalism’s drive for profits is a massive drag on overcoming this pandemic and puts lives at risks. This is further evidence of the need for a socialist alternative to this system of profiteering, where democratic public ownership of society’s resources can meet the challenges facing humanity and our eco-system.