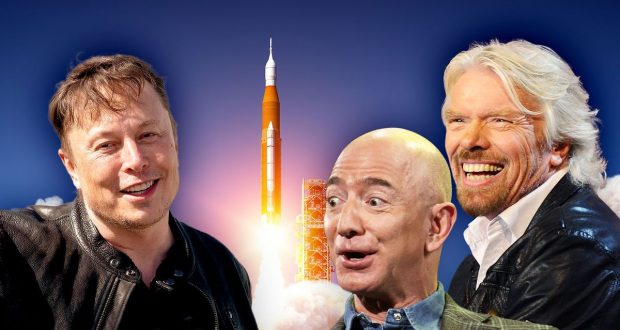 It is a pity Jeff Bezos is only going to be up in space for three minutes. If he stayed for a few hours he would find out that astronauts are the only people with worse toilet arrangements than Amazon drivers. Reflecting anger at his hoarding of wealth and the cruel conditions of his workers and contractors, 158,000 people have signed a petition saying ‘Do not allow Jeff Bezos to return to Earth’ after he is launched into orbit on 20 July.

In 1957 the first artificial satellite, Sputnik, was launched from the Soviet Union. In 1961 the first human, Yuri Gagarin, followed. This was an incredible achievement for a state that just 20 years before had been under Nazi occupation, suffering the loss of 27 million lives, and thirty years before that had been a semi-medieval country with mass illiteracy.

Notwithstanding the monstrous rule and dictatorship of a bureaucratic elite, the Soviet Union was an economy where capitalist property relations were abolished and was based on state ownership and planning of its key resources. Economic decision making was not based on the interests of private profit. Sputnik, which was pioneered decades before Bezos and his ilk blasted off into space, was indicative of the potential superiority of an economy based on planning rather than the chaos of the “free” market system. For individual private capitalists, sending people to space would not garner short-term profit, hence they would not invest in such a project.

Even in the United States, the land of “free enterprise” and the wealthiest capitalist economy in the world, space exploration was only made possible through monies from the public sector. But these old state-led space projects are dinosaurs. Ruthless space (private) capitalism is the way forward. The profit motive will drive us to the stars. Last year, Elon Musk sent a rocket from one public-funded institution (Kennedy Space Centre) to another (the International Space Station). That’s right: it only took the private sector half a century to catch up with the public sector (while using the public sector as a crutch).

Waste of the system

Meanwhile, Richard Branson and Jeff Bezos have been competing to be the first billionaire in space. Branson pulled out all the stops to get up there on a cheaper and less impressive flight on 11 July – just ahead of Bezos’ scheduled launch. Bezos tweeted his congratulations but was probably seething with anger.

In 1969, the year of the first moon landing, Gil Scott-Heron contrasted the vast wealth spent on the space race with the slum conditions black people were living in:

People accused him of being bitter, but if anything Gil Scott-Heron was too optimistic. Fifty-two years later people still can’t pay their medical bills. Meanwhile, the super-rich are going to space.

And this new ‘space race’ is so wasteful and stupid that even Gil Scott-Heron would be lost for words. In the 1960s you could at least make an argument that it was furthering the cause of science and the good of humanity. There was a lot of genuine inspiration and idealism, it showed the real technological possibilities possessed by humanity.

But the current ‘space race’ is a PR exercise. It’s happening so that billionaires can pose for photos in spacesuits like movie astronauts, with one eye on their retweets and the other eye on their stock market valuation. The focus in news reports is on ‘bragging rights,’ not on the final frontier or the destiny of humanity.

Richard Branson’s method is to slap the Virgin brand on any product so that people will buy it from name recognition. He builds up that name recognition through bluster and stunts – like flying 80 kilometres up into the sky so that he can pretend he’s some space explorer. The idea is that the customer will say, ‘What’s this, Virgin-brand cryptocurrency? Oh yeah, Virgin. The ones who went into space.’ …60 years after Yuri Gagarin, and not as high up as him, and not for as long.

There is one practical purpose to the billionaire space race. But it’s not for science or humanity. It’s about creating a new tourism market whose number one selling point is that 99% of the human race can’t afford it. Virgin Galactic (what a grandiose name) has already sold 600 tickets at $200,000 each and Bezos auctioned off a seat in his craft for $28 million.

Bezos, speaking about his forthcoming flight, said: ‘If you see the Earth from space, it changes you. It changes your relationship with this planet, with humanity. It’s one Earth.’ More and more rich people are going to take off into space over the coming years, and when they come back to earth they will engage in all kinds of annoying clichéd humblebragging. But if Bezos really wants a humbling experience he should try using a bottle or a plastic bag for a toilet.

Some people complain that the billionaires are leaving us behind and taking to the stars rather than solving the problems here on earth. But that’s wrong. First, the rich profit from most of the problems and can buy their way out of others, so obviously they’re not going to solve them. Second, it takes an incredible amount of work down here on planet earth just to keep one person alive in space. On Earth, they would be dirt-poor without the labour of thousands of workers. In space, they would not be poor, they would be dead. So they can’t ‘leave us behind.’ Third, they’re not actually setting up Ayn Rand colonies on Mars. They’re just floating around in orbit for a few minutes. Even with all their wealth, that’s the best they can do.

Prestige projects and enterprises are linked with the psyche of our ruling class, a way of bolstering their fading authority and lording it over the rest of us mere mortals. This is particularly necessary in a period of unending crisis caused by their capitalist system, be they economic, ecological, or social. Let us not forget this is a system that can send billionaires to space while 785 million lack access to clean water.

The rule of these billionaires and capitalism must end. We need a socialist world, in which technology can be utilised, through public ownership and democratic planning by the working masses, to transform our lives beyond recognition, while healing and conserving our beautiful planet.