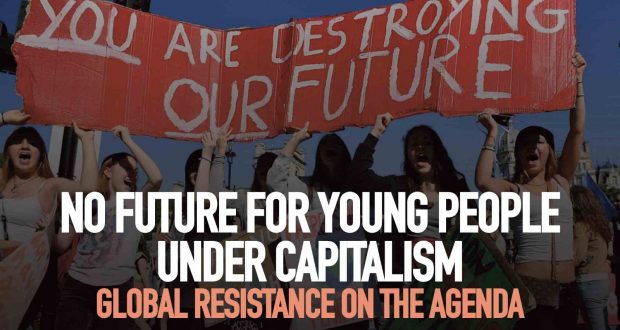 Young people: No future under capitalism — Global resistance on the agenda

Recently, the British pro-capitalist journal the Financial Times conducted a survey of more than 1,700 young people, to find out the main concerns and problems facing both Millennials and Generation Zers today. The results were stark but not surprising. When asked what their main problems in life were, respondents reported cramped housing, skyrocketing student debt and general insecurity in day-to-day life. As one 25-year-old respondent said:

“London feels increasingly full of anxious, burnt out 20 — and 30-something-year-olds who spend half their income on a cramped flat with a damp problem and spend their weekends in the foetal position on their landlord’s Ikea sofa, endlessly scrolling through the latest app. We have so much more than our parents did at our age, but also so much less.”

A young person in the US said:

“Student loans feel like a unique problem for our generation. I can’t think of a similarity in the past when youth had such large financial burdens that can’t be discharged in most cases.”

While those surveyed were overwhelmingly from professionalised and middle-class layers, including those working in “banking, media, education, science and technology”, this itself says a lot about the scope of the capitalist crisis and how it impacts youth today. Formerly relatively privileged and ‘well-off’ sections of the workforce have found themselves ‘proletarianised’ — thrown into the ranks of the working class as they bear the brunt of the crisis today.

Who is being hit hardest?

The social crisis spurred on by the pandemic has massively exacerbated already-existing patterns of insecurity and precarious living among young people. Sectors of the economy where young workers are concentrated (service, hospitality, entertainment etc.) have been the ones most heavily impacted, without provision of sufficient financial support from capitalist governments.

The following graph provided by the Pew Research Center exposes this reality most starkly, revealing the rate of job losses affecting Gen Z workers twice as much compared to ‘boomers’:

The results have been stark across both the ‘developed’ world, but particularly within neo-colonial countries. As of March 2021, the EU unemployment rate among young people dwarfed the general figure, sitting at 17.1% compared to overall unemployment at 7.3%. But even in China, where the state tries to project an image of economic ‘recovery’, according to the country’s National Bureau of Statistics, unemployment among 16–24 year olds sat at 13.1% in March of this year, compared to the national jobless rate of 5.5%. Internationally, many of these figures are also bound to be serious underestimations.

General precarity, combined with the impact of lockdowns on schooling and education, will have the effect of compounding the already-existing inequalities inherent to the capitalist system. Already in Africa, which still awaits the worst health impact of Covid before it rips across the continent, 21% of young people were denied access to any forms of employment, training or education.

Those whose education will be most heavily impacted will be those without the economic means to sidestep the pandemic’s worst effects. When combined with the systemic disadvantages that capitalism provides for the most oppressed in society, disparities according to race, gender and sexuality will continue to deepen.

The scale of the crisis for young people has forced sections of the capitalist class to consider which course it should take. With record numbers of young (and old) people having to claim state benefits to get by, old capitalist propaganda about “welfare scroungers” — a classic line in the arsenal of the ruling class — will gain much less traction in today’s world.

Instead, the current tactic is to present a false picture of a new-found ‘compassion’ on the part of the capitalists. The World Economic Forum — one of the chief NGO organisations propagandising for neoliberalism in the past — this year commissioned a ‘Global Risks Report’, which makes clear that “young people must be guaranteed a say in the global recovery”. But this does not reflect a sudden conscience from the ruling class. After all, it was capitalist interests and the laws of profit-making that have allowed Covid to generate a death toll well in excess of 3.5 million on a global scale.

More than anything, the language of ‘compassionate’ capitalism reflects a fear among the ruling class of the rule that the youth will play in struggles around the world. Stressing the need to fight “youth disillusionment”, as the report puts it: “Failure to ensure them a seat at the table risks entire societal and economic systems being rejected by this generation”. In other words, anti-capitalist, socialist and revolutionary ideas will gain further traction among young people unless radical action is taken by the ruling class.

And their fear is not unfounded! Among all of the mass revolutionary movements and uprisings of the last decades, unemployed youth have played the central role. These protestors — often university graduates born into expectations of a career — were at the centre of struggles against austerity and the neoliberal EU troika in Greece and Spain, in the revolutionary movements that swept the Middle East and North Africa in the early 2010s, and more recently in mass movements from Columbia, to Chile, to Myanmar and Hong Kong. For many those with no viable future under this system, resistance will be the order of the day through the 2020s.

The pandemic has brought home the need to draw together all of the protest movements that have emerged in recent years on a global basis. Those who took part in the explosive global climate strikes in 2019–20 have learned the valuable impact of struggle in forcing the climate crisis onto the agenda, for instance. Connecting this struggle to the need for renewed class struggle against waves of redundancies and attacks on workers’ conditions among a new generation who will face the worst brunt of the crisis will be essential.

-Democratically run, militant young members campaigns in all unions, to ‘organise the unorganised’ and lead young workers in struggle against employers, government attacks, as well as sexual harassment in the workplace.
– Free, publicly-owned, nationalised and democratically-run high-speed WiFi to make home-learning education accessible to all. Nationalise the big broadband providers under democratic workers’ control!
– Solidarity with mass youth protest movements — defend the right to protest and organise!
– Socialist change to end capitalist crisis. For mass testing and vaccinations to contain the spread worldwide. End vaccine patents and bring production under public ownership. Only a socialist plan of production will solve issues facing ordinary people, both young and old. Join ISA today!