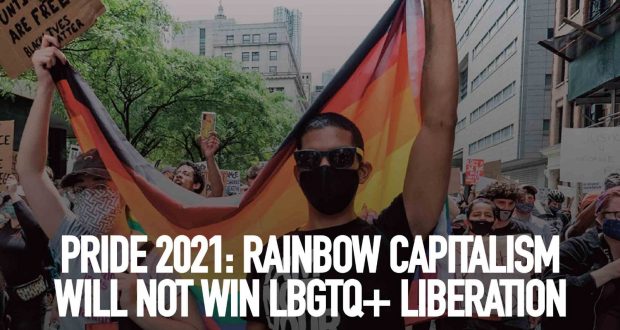 Every June, companies without fail try to seem LGBTQ+ inclusive by changing their social media icons to the rainbow flag and selling pride themed merchandise. While this shows a postive shift in society’s view of LGBTQ+ people, with big business forced to reflect this, rainbow capitalism does very little to positively impact the lives of queer people in Ireland and internationally.

Ireland has seen progress in relation to LGBTQ+ rights, with marriage equality and the Gender Recognition Act in 2015. This doesn’t mean that the fight against LGBTQ+ oppression has ended. Both these victories were won because of grassroots campaigns from below that pushed the conservative government into calling a referendum for marriage equality and passing self-determination legislation for trans people.

There are many issues still facing the LGBTQ+ community in Ireland, not least access to trans healthcare. Currently the waiting list for Loughlinstown is over three years long. Like many services within the HSE, the National Gender Service is underfunded and understaffed. The NGS uses a psychotic model of care for trans people, despite the World Health Organisation declassifying being transgender as a mental illness in 2018. Trans people have to undergo a psychiatric evaluation and get a diagnosis of gender dysphoria to get access to Hormone Replacement Therapy. They are often asked invasive questions about their sex lives, childhood and any abuse or trauma they might’ve experienced.

This model of care goes against best practice as advised by the World Professional Association for Transgender Health (WPATH). Trans people are unable to access gender affirming surgeries leading many to travel abroad and use services like GoFundMe to fundraise for it. Trans healthcare needs to be publicly funded and fit the needs of the trans community. It should be informed consent based, where trans people are believed and empowered to make decisions over their own bodies. This should be linked to creation of a properly funded, one-tier, secular and public health service that is free at the point of use.

Mental health is an ongoing issue within the community, especially young LGBTQ+ people. In 2021, there was an increase of LGBTQ+ young people experiencing suicidal ideation and engaging in self harm due to social isolation and lack of access to safe and supportive places due to the pandemic.

Over half (56%) of LGBTQ+ young people say that they are not fully accepted in their home environment, with many confined to homes that are unaccepting of their sexuality or gender identity. This raises the need for LGBTQ+ inclusive and accessible mental health services along with a need for public and affordable housing so LGBTQ+ people can live in accepting environments.

Separation of Church and State is a LGBTQ+ issue as many schools are run under a Catholic ethos. Homophobic and transphobic bullying in schools is made worse by the lack of LGBTQ+ inclusive sex education. It was found that 73% of LGBTQ+ secondary school students felt unsafe in school and 68% weren’t taught anything positive about LGBTQ+ identities in school. Sex education should be secular LGBTQ+ inclusive and teache students about consent.

Violence against the LGBTQ+ community happens in Ireland and internationally. In Ireland only 10% of transphobic crimes are reported to the Gardaí. Between January 2008 and September 2020, 3664 trans and gender diverse people were murdered worldwide with 97% being trans women / trans feminine.

This comes at a time where LGBTQ+ rights, especially trans rights, are being attacked worldwide. In the UK, there has been a rise of trans-exclusionary radical feminists who seek to erode trans rights by pretending they care about women’s rights. Women’s rights and trans rights are not mutually exclusive and are to be fought for together.

The same capitalist system that oppresses women also oppresses trans people and the wider LGBTQ+ community. Rainbow capitalism won’t liberate LGBTQ+ people from their oppression. What is needed is a united struggle of the working class and oppressed against capitalism and to build a democratic socialist society. Such a society would be built on human solidarity and one where everyone is accepted. 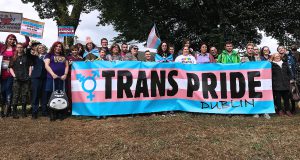