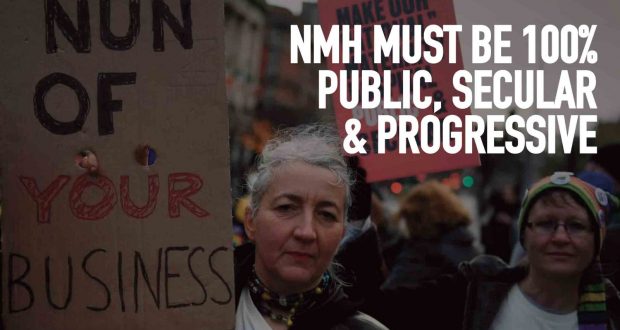 The resounding two-thirds majority vote in the 2018 repeal referendum vote was undeniably a vote for both abortion rights, and more generally for a progressive, secular Ireland. Building on the Marriage Equality vote that affirmed LGBTQ rights, it represented a watershed rejection of the cruel church-state nexus of repression of the past.

The very idea that in the 2020s, most especially after the grassroots abortion rights mass movement achieved such a victory, that there is even a possibility that a newly built National Maternity Hospital would be anything other than 100% public, secular and progressive is outrageous. This, and the cruel botch-job done on the Mother and Baby Homes Commission of Investigation, in fact presided over by a Green Party minister, emphasise the continued backwardness of the political establishment in this state.

The gall of the St Vincent’s Hospital Group and the Religious Sisters of Charity in insisting that they maintain ownership of the site would make the blood boil. Meanwhile, unconvincing assurances from the Government that the Church teachings would have no influence on clinical decisions have sounded pathetic.

Build a mass movement to win

Timely truth-telling interventions from Dr. Peter Boylan to repeatedly insist that vital procedures for women and trans people of course will not be carried out while the Church can stick their oar in means that the pressure is really building on the Government. A major and mass demonstration should now be called and organised for — supported by all feminist, LGBTQ, migrant and traveller rights organisations, and the Trade Union movement, with networks build up during repeal reactivated to help deliver mass attendance — to demand a 100% publicly owned, secular and democratic new NMH.

Talk of compulsory purchase orders of the potential NMH land in Elm Park that means compensation to the church based on market value is problematic. Why should significant public funds be handed over to a religious order sitting on such prime located land? How can this possibly be justified? A compulsory seizure order of this land by the state with no compensation for an institution that has caused so much pain and suffering to women, the LGBTQ community and working class people generally, would be more appropriate.

The idea of locating the hospital on public land in Tallaght, or perhaps in Blanchardstown, beside Tallaght University Hospital or Connolly Hospital respectively, makes sense. It’s a straightforward proposal to ensure a fully public service is developed, and it means locating a state of the art NMH in close proximity to communities with a high birth rate,  accessible for those all around the country.

The Garda Commission has just been forced to apologise for thousands of unheeded, “cancelled” 999 calls relating to domestic violence and sexual assault. This is in a state in which an activist from ROSA Socialist Feminist Movement has just been issued a fine in a criminal proceedings for allegedly being an “organiser” of a masked and socially distanced symbolic demonstration of less than ten people calling for state action on the shadow pandemic of gender violence. The often callous treatment of pregnant people and their birth partners during the pandemic has also been an indication of continued state misogyny.

The Debenhams majority women workers who fought back against corporate greed are emblematic of the working class and young women taking the lead in the struggle for justice. The NMH scandal has exposed the political establishment yet again. Alongside the housing crisis, climate catastrophe caused by a for-profit system, it points to the urgent need for radical change.

We need to build a united movement of the working class and oppressed to fight against a capitalist system built on oppression, backward ideas and rule of private profit. If you want to build a socialist alternative to this rotten set up, then join us today.