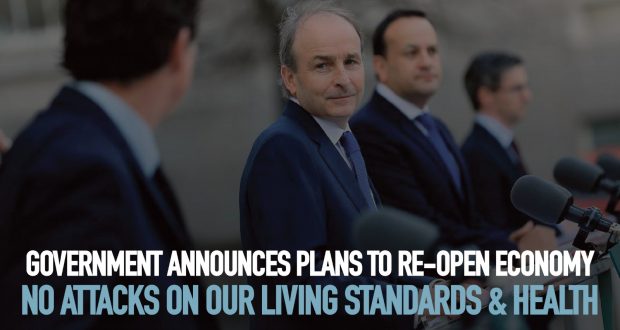 Last week, the government announced the details of further measures to reopen the economy and lift other Covid restrictions. Hotels have reopened. Outdoor pubs and restaurants will open on 7 June, as well as cinema and gyms. The opening of indoor hospitality is planned for 5 July and travel restrictions will be significantly relaxed from 19 July.

Obviously, vaccination is proceeding and having a positive effect on the level of infection and illness. However, the dangers of this pandemic are still real, with much of the population still unprotected. The incidence of Covid among young people is increasing. A NPHET letter to health minister Stephen Donnelly warns that “a significant proportion of the population” will not be vaccinated in June and July and “no assurance’’ can be given in relation to a possible surge in infections. There is also the very serious threat from new variants, which can increase as non-essential travel is resumed. In Britain, despite a much higher vaccination rate than Ireland, infection rates are rising again and the majority of new cases are attributed to the variant which recently emerged in India.

As has usually been the case during this pandemic, the focus of the establishment has been on the individual behaviour of ordinary people as the key obstacle to the fight against the virus. This has been used to absolve the government who pursued disastrous premature reopening policies, the business lobbies who demanded these and the bosses who have forced workers into unsafe workplaces. A system based on inequality and profit seeking has not been capable of putting people’s health first and has led to three waves of the virus, repeated lockdowns and thousands of unnecessary deaths.

Now attacks have been directed by many in the establishment against the mainly young people who gathered in large numbers outdoors on South William Street in Dublin City Centre. Obviously large gatherings do pose dangers, even if outdoors. There were also many complaints about rubbish being left behind.

However, it is ironic that the message of the government and health authorities has exactly been that people should gather and socialise outdoors this summer. The problem is that there has been nothing put in place to facilitate this. In fact, public space, seating, toilet facilities etc has been undermined and removed for years in Irish cities and it has become more and more difficult to gather without spending money. Dublin City Council have even closed off existing public spaces in response to crowds gathering, pushing people into fewer areas. Not only do cities need more bins (2,000 bins have been cut in Dublin since 2008) and public toilets, but there should have been a planned rollout of outdoor spaces and seating in the run-in to the summer.

Young people and outdoor gatherings are being scapegoated, but attention is not being paid to the dangers involved in the reopening of the economy. On Wednesday 2 June, Dr Mai Mannix of HSE Mid-West announced they were investigating 50 cases in 20 workplaces in the region, mainly in Limerick. She said there were 50 close contacts involved in an outbreak from one hair salon.

In fact, it is ironic that the same young people who are being lectured about outdoor gatherings, will in many cases be expected now to return to work in hotels, bars, restaurants and other workplaces where there will be less chance for social distancing and without being vaccinated. The Socialist Party has argued throughout this crisis that workers have a right not to be forced back to work in situations where their health is put at risk. Workers should collectively decide when it is safe to return to work and when it is not. Any workers who take this stand should receive the full and active backing of the trade unions.

Another rush to reopen the economy

Most of the sectors which are opening are dominated by low pay and precarious working conditions. Indeed, some employers are taking to the media to complain that the Pandemic Unemployment Payment is making it hard for them to recruit workers. This only highlights how many workers did not have a living wage when this crisis began. Instead of instituting a minimum wage of €15 as a starting point, the government has instead announced plans to cut the PUP. This will drive thousands into poverty.

Despite their claims that the economy will ‘’take off like a rocket’’ the government themselves say that unemployment will remain as high as 10% for years to come. All attacks on the PUP should be opposed and €350 should be established as the minimum for all those unemployed in this crisis, and for social welfare recipients generally. The government also plans to lift the rent freeze opening tenants up to 8% rent rises in July. And all this from a government which promises the ‘’opposite of austerity!’’

This is the future for young people and working-class people generally under this government of the super-rich, landlords and the business class, and under this capitalist system which offers only mass unemployment, low wages, skyrocketing rents and a system which will risk your health for profit.