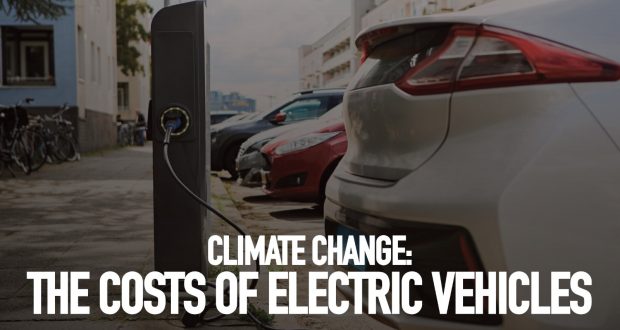 Electric vehicles (EV) are hot news. Sales worldwide soared in 2020, increasing by 43 percent over the previous year. Automakers and governments are embracing new EV markets and pushing them as one of the most important solutions to climate change.

Governments around the world are announcing support for the shift to EVs. Biden’s proposed infrastructure spending includes $174 billion to encourage the transition. Canada has announced over $1 billion of support for manufacture and sales, with more to come. European countries are doing the same. This is partially about the environment, but vehicle manufacture is a major employer and governments don’t want to lose out to competitor countries on the growing EV market.

Manufacturers have announced big changes. GM says it will stop making gas-powered vehicles by 2035, Volvo by 2030, and Volkswagen by 2026; others have made similar proposals. They see a future in EV for an industry that otherwise faces decline. This is not out of concern for the workforce or their communities, but rather for the profits and dividends.

British Columbia currently has the highest per capita EV sales in North America. The province has increased rebates to encourage ownership — consumers can save up to $8,000 on the purchase of electric vehicles, up to $350 to install a home charger, and up to $2,000 per charging station for worksites, apartments, and condos. This is quite an incentive for consumers to make the switch. It is part of the government’s plan to meet the standard set in the Zero-Emission Vehicle Act, which mandates that all light-duty vehicles sold in BC will be zero-emission by 2040. However, EVs are still expensive, and it will be years before there is a significant used-vehicle market. Most working-class drivers will not be able to afford EVs any time soon.

Reducing carbon emissions and mitigating climate change is vitally important — there is a global climate emergency. Cars and trucks account for 19.9% of greenhouse gas emissions in Canada. EVs are a very expensive way to tackle climate disaster and many drivers will not be able to immediately afford them, so it is doubtful they can make a big enough dent to meet emissions targets and timelines. More significant is the richest one percent whose carbon emissions, according to Oxfam, are “more than double the emissions of the poorest half of humanity.”

EV cars are not carbon neutral: the production of cars and batteries use significantly more energy and releases more carbon dioxide, more than a conventional car. Much depends on how the electricity to run the manufacturing is produced: is it from burning coal or renewable energy? Every kilowatt-hour of storage capacity of an EV battery results in 150 to 200 kilograms of carbon dioxide released. All told, production of an electric car results in up to 17.5 tons of carbon dioxide emitted. Given the propensity of the super-rich to buy fleets of luxury vehicles, even when every vehicle is eventually electric, an enormous amount of carbon will still be emitted unnecessarily.

Electric vehicles will continue to release pollution from tires: they are the second largest source of microplastics in the world’s oceans and elsewhere.

For those who can afford it, and those who require a new vehicle, electric vehicles are of course the obvious choice; the lifetime carbon emission related to an electric vehicle versus a combustion vehicle is lower. But the EV market is not capable of addressing carbon emission on the scale necessary, and it will take far too long for most drivers to afford and adopt them.

The human cost of electric vehicles

Not only is the international working class financially unable to swiftly adopt electric vehicles, but workers all over the world are deeply exploited in battery manufacture and related mining, including children. Approximately 100,000 cobalt miners in Congo rely on hand tools as they dig hundreds of feet underground. The work is extremely dangerous, with frequent deaths and injuries, and little compensation for labour (piece rate resulting in $2 or $3 on a good day). Ninety percent of China’s cobalt is mined in Congo. The raw material moves from these mines to Chinese companies who are responsible for producing vast amounts of cobalt for the world’s battery producers. The mines also produce stunning amounts of pollution in the region, which has been linked to birth defects and illness. There are some nascent efforts to organize these miners.

Another important ingredient in EV batteries is lithium. Mining companies from around the world have moved into the Atacama lands of Chile to extract the mineral. The Indigenous Atacamas people are receiving next to nothing in return. A Canadian-Chilean company named Minera Exar will extract $250 million a year from this region while Atacamas communities will only receive between $9,000 and $60,000 each, yearly. Since lithium plants require large quantities of water, the threat of contamination and shortages in the exceptionally dry region is a serious worry for these communities.

In North America, The United Auto Workers union is demanding that General Motors pay full union wages at EV battery factories. The company is currently planning to put workers on a lower pay scale at their new battery manufacturing plants. There will be significant losses to UAW membership in the next decade as old plants are replaced, due to simpler EV production which requires less workers. New plants will require new organizing efforts alongside the best of the militant traditions that built the unions.

Ending severe exploitation will require all of these struggles to be linked under the banner of international working-class solidarity against the capitalist mode of production. To limit exploitation, organized battery factory workers could at first make demands about the source of materials, and if those demands are not met, refuse to work with materials that are furnished by extreme exploitation. Organized workers along other points in the supply chain could do the same. Congolese miners and Indigenous communities from Chile and Argentina will need to organize and make demands for social ownership and democratic control of these resources.

There is no reason to continue allowing the capitalist class to extract and hoard untold wealth from these regions and from workers all over the world. An organized working class has the power to stop horrific exploitation by withholding labour and demanding social ownership of the entire industry. International solidarity is critical to success; an injury to one is an injury to all!

A full assessment of the human and environmental costs of massive worldwide EV production — which is still in its infancy — shows that EVs are not the revolutionary solution to climate change that we need. The impact will be too small and too sluggish to address this crisis. The amount of suffering that the global capitalist ruling class will inflict on Indigenous, poor, and working people is too great and will only intensify as the market grows. The most effective way to tackle transportation’s carbon problem would be to rapidly build massive transit systems like never seen before, to replace the need for millions of vehicles: transit which is high-speed, accessible, and travels between cities.

There is another problem with EVs — they continue the car-based infrastructure of highways, sprawl, and busy urban roads. Cars use at least 30 percent of urban land, and much higher in some cities. This land could be better used for parks, urban farms and housing. This would result in healthier neighbourhoods that are less car dependent. Many urban and rural communities are designed to accommodate cars, forcing people to use a car to travel. Shifting land use, along with good quality transit, could break this damaging cycle.

A green economy will require electric vehicles as public transit is not capable of addressing all transportation needs. But after decades of neoliberal attacks and budget cuts, it is time to re-imagine communities, towns and cities based on liveable neighbourhoods with a wide range of local jobs, green spaces, facilities and advanced transit systems.

The billions of dollars going into electric vehicles would be better spent on urban and rural transit and developing high speed rail for passengers and freight. Electric vehicles are not sufficient to deal with climate disaster, and it’s a bait-and-switch that the capitalist class is relying on to continue extracting profits. It’s time to make mass public transit the primary form of transportation all over the world.