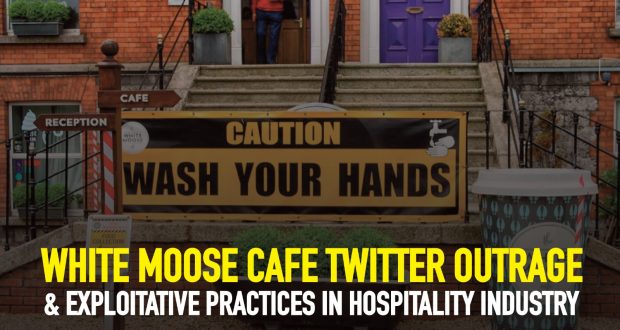 The White Moose Café in North Dublin, and it’s owner Paul Stinson, have recently been the focus of another round of social media outrage. This time for alleged exploitative work practices, as well as the usual deliberately inflammatory social media posts. Stinson is infamous for deliberately provocative outbursts on social media.

On Tuesday 4 May, coordinated updates from the cafe’s social media accounts complained about the difficulty of hiring hospitality staff – blaming the Pandemic Unemployment Payment (PUP). Tired right-wing tropes characterizing people as living off taxpayer money were thrown in for good measure. This calculated rant moves beyond parody with the knowledge that Stinson inherited the establishment from his parents.

Following his most recent campaign, a number of former workers have come forward with allegations of a range of horrible exploitative practices. Although this article falls into the trap laid by Stinson, now that the dust has settled it is worth examining the allegations to serve as an example of the exploitation that is rife in the broader hospitality industry.

While the alleged exploitative practices reported on Twitter have gotten a lot of attention for this one particular cafe, they are par for the course in the hospitality industry. Each of these methods is geared towards getting the most work for as little wages as possible.

The following is an unfinished list of subtle and not so subtle tactics of exploitation that keep profits flowing off the back of underpaid and overworked employees.

Findings from a 2019 study highlight the weight of exploitation faced by hospitality workers. A massive 76% of respondents said they experienced verbal abuse. Over half said they don’t get the breaks they are entitled to, and 55% said they had witnessed or experienced harassment based on sexuality, age or race. Another 48% said they felt they had no voice or access to union representation

The only solution to exploitation that has ever worked is when workers organise and fight back with the same level of determination and coordination as the bosses have. The trade union movement must step up to this task and organise a fightback against exploitative and precarious working conditions.