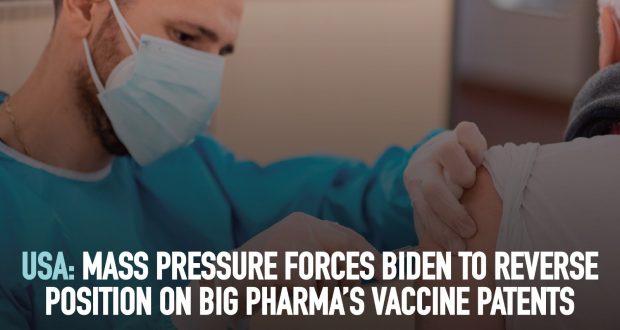 For months, a global struggle has been developing to demand that the governments of wealthy, Western nations put people before billionaire profit, and end the stunning inequity in access to the life-saving COVID-19 vaccine. The rapid and widespread global dissemination of vaccinations is at the center of every strategy by public health professionals to stop the spread of the virus. However, there are breathtaking inequities in the distribution of vaccinations around the world.

The lack of accessible vaccines in the majority of countries around the world is creating an unimaginable human catastrophe on a scale not seen before. In India thousands are dying daily. Reuters is reporting that “Gas and firewood furnaces at a crematorium in the western Indian state of Gujarat have been running so long without a break during the COVID-19 pandemic that metal parts have begun to melt.”

Amidst this human suffering, profit-driven billionaires and big pharmaceutical companies, with the blessing of the Biden Administration up until this point, have fiercely blocked many countries like Brazil, India, and South Africa from producing the COVID-19 vaccine, all in the name of so called “Intellectual Property Rights.”

In this devastating context, today activists won a landmark victory, forcing the Biden administration to concede that they will stop blocking the WTO TRIPS Waiver*, to temporarily remove Big Pharma patent restrictions to begin to allow generic vaccine production. This is a historic step towards giving vaccine access to billions of people, and an urgent one, with the pandemic creating a humanitarian catastrophe in countries like India, and public health experts pointing to the millions of lives that are at stake.

Socialist Alternative in the United States joined the worldwide effort, with the first-in-nation resolution our Council office brought forward alongside many activist organizations, and which was passed by the Seattle City Council, demanding Biden stop blocking the TRIPS Waiver.  Organizations that led this effort include the Washington Fair Trade Coalition, the Community Alliance for Global Justice, the Citizens Trade Coalition, the Coalition of Seattle Indian Americans, Real Change, and UAW 4121. Inspired by our victory, a similar resolution was subsequently passed this week in Cambridge, Massachusetts, and others were being taken up in Chicago, Illinois, and Burbank, California.

This is a testament to how tremendous pressure from ordinary people on a mass, international scale can successfully push back against extremely wealthy and powerful adversaries such as Big Pharma executives, their political representatives, and the billionaire class as a whole. In fact, this victory has overcome the fierce opposition not only of the Moderna and Pfizer executives, but also billionaires like Bill Gates. The Microsoft billionaire’s “philantro-capitalist” Bill & Melinda Gates Foundation has for years pushed a privatization agenda against American public schools inside the United States, and on behalf of agribusiness conglomerates against small farmers in the neocolonial world. The Gates Foundation notoriously opposed the TRIPS Waiver, prompting many activists to correctly call Bill Gates a “vaccine racketeer”.

The WTO has a consensus decision-making body (based on consensus of imperialist powers, of course, not working people) so the patents still stand. Now with the Biden regime being forced to concede to this growing international pressure to end vaccine apartheid, we need to demand that the European Union (EU), Canada, and other regimes end their opposition. The patent removal is a first and necessary step for countries to begin generic vaccine production to save untold lives in the neocolonial world.

Hundreds of activists in Seattle and around the United States fought to win this. We should take this momentum forward once the waiver is won to begin fighting for Medicare for All and an end to the domination of Big Pharma altogether, which cynically profits off human sickness and misery. With the escalating environmental crisis, we know that future pandemics are on the horizon and Big Pharma and its “intellectual property” laws, which brutally put their profits before human lives, are an ongoing threat to humanity.

Permanently taking on behemoths like Pfizer and Moderna, as well as their equals in other major industries, will require taking them out of the hands of profiteers and into the hands of ordinary people through democratic public ownership. We need truly democratic planning of our economy and society so we are never again in a position where millions are forced to die for the profits of the super-rich.

The alternative to “vaccine nationalism” is international working-class solidarity and socialism. The current crisis of COVID and capitalism shows more clearly than ever why we need to fight for a socialist world.