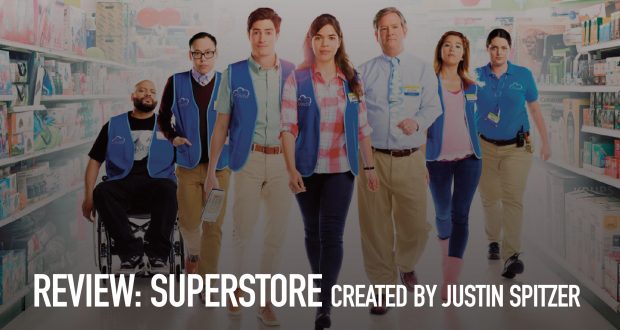 If you haven’t yet watched everything on Netflix and need a recommendation for something funny and light-hearted, then look no further than Superstore, the six-season comedy about the employees of the fictional Cloud Nine ‘big box store’. Warm and witty, Superstore offers some of the comforting escapism that we all need, yet it also has real depth, offering a sharp critique of the system that allows ‘Corporate’ to make huge profits while its employees struggle to survive.

The brutal reality of being a minimum wage employee is explored in many ways throughout the series. For example in relation to motherhood, first with Cheyenne, the 17 year old pregnant worker who cannot afford to take any time off before giving birth and plans to return to work the next day. “Glenn, I might be ten minutes late tomorrow” she says on her way to the hospital, after having her baby in the store.

Later, Amy, one of the main characters, is also due back to work the day after giving birth becuase she’s not entitled to maternity leave. She can barely get through the day, but she does, because she has no choice.

The fact of having no choice and living on the edge of poverty is taken as a given in the lives of almost all the characters. More than once, the team puts a collection jar at the checkouts to fundraise for an employee to be able to go to the doctor or get an antibiotic.

Another theme that is all too relatable for some low-paid workers in the US is that of being undocumented and living with the constant fear of being found out and arrested by Immigration and Customs Enforcement (ICE). ICE as they are known and spoken of in hushed tones, are an intimidating presence in Superstore even before they become aware of Mateo’s undocumented status. Suddenly, an ordinary day at work becomes like a war-zone, as ICE agents storm the store and hunt Mateo down as if he was a war-criminal, rather than a worker without a greencard.

Superstore is inherently political. It assumes a high level of engagement on the part of its viewers with current issues – relating to class, race and gender – and takes a humorous, yet quite progressive stance on these.

Anyone who has ever worked in retail or customer service will be able to relate all too strongly to the comically accurate depictions of customers; the ones who just won’t leave even though you’re closed, the ones whose child is wreaking havoc while they are happily oblivious, the intimidatingly cool teenagers you have to ask to leave.

And anyone who has ever been to a protest or tried to organise in their workplace will appreciate the struggle of the Cloud Nine workers, hilariously and sympathetically portrayed here. As Jonah says, ‘this company made a profit of a billion dollars last year, why shouldn’t they pay maternity leave.’ It’s a simple question that gets to the heart of life at the Cloud Nine superstore and indeed for minimum waged yet completely essential workers everywhere. Essential pandemic viewing.