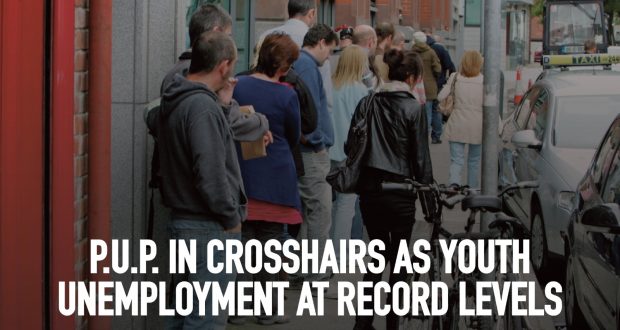 Given the scale of the economic collapse and job losses that followed the onset of the pandemic last year the government was forced to introduce the Pandemic Unemployment Payment of €350.

From its inception, the PUP has been a massive headache for this right-wing government. Trying to strike a balance between not wanting to demonstrate that the state can in fact provide support for people suffering and not wanting those same struggling people to stage a revolt, the government initially proposed the temporary weekly payment at a woefully low €203 for all workers. Facing a massive backlash from the public, the government temporarily retreated and raised the payment to €350 per week.

In July of last year, the government changed the eligibility so that there would be four tiers, hitting the lowest paid workers the most. For example, if you were earning €200 or less before the pandemic your social welfare payment was cut to €203 from €350, thus approximately 110,000 workers went down to the lower rate.

Last week, Minister for Public Expenditure Micheal McGrath gave a vague statement to the press about his intention not to end the PUP in June of this year entirely, but stating instead that “these supports will continue after that, but perhaps in a changed way.” It has been reported that these cuts could amount to €50 per week, lowering the PUP to €300 per week for over 300,000 workers. In a feeble attempt to reassure workers and families struggling to make ends meet on the current payment, McGrath commented that the single month between the announcement of the suspected cut in May and its implementation in June would be “plenty of notice”, further illustrating this government’s callous disregard for worker’s ability to survive.

Any proposed lowering of the current €350 per week is completely unacceptable, as the government’s own Low Pay Commission estimates the living wage in Ireland to be €12.30 per hour which amounts to €492 per week at the standard 40-hour work week, making the current €350 already €142 below the minimum a worker needs to live in Ireland each week. It should also be noted that the figure from the Low Pay Commission is clearly an underestimation of what is needed to survive.

The government’s recent capitulation on an increase of the minimum wage throws the plight of low wage earners into stark relief. The current national minimum wage is €10.20 per hour, a shockingly low figure considering the drastic rate at which living costs have increased over the years.

Minimum wage workers not only suffer the burden of increasing in-work poverty but are also enormously overrepresented in the precarious work sector, often having to compete with their colleagues for hours through shift work on part-time contracts with no sick pay. This puts them further in jeopardy by forcing them to choose between potentially catching or spreading COVID or earning enough money to feed themselves and their families. Migrant labourers are particularly vulnerable to this abusive system which has been tragically demonstrated by the repeated outbreaks of COVID in meat plants since last year.

One of the worst affected sectors has been hospitality and tourism with approximately 160,000 jobs lost and an 85% reduction in revenue over the past year and with no recovery in sight due to the government’s mismanagement of the pandemic. Roughly a third of workers in these sectors are young people and young women in particular who are now facing the reality that they have absolutely no prospects for employment in the near future, even in the largely low-paid hospitality and tourism industry.

The current youth unemployment rate in Ireland is staggeringly high at 59% for people aged between 15-24 and an incredible 64% for women in the same age group. Young people are now living through their second economic meltdown in 10 years. In the aftermath of 2008, youth unemployment at its worst was 30% leading to mass emigration and the replacement of stable, full time work with precarious zero hour jobs.

The housing crisis has also particularly affected the young, nearly half of young adults between the ages of 25 and 29 live with their parents. Soaring rent prices, due to a system which prioritises short term profits over people’s needs, will ensure young people will hand over the vast majority of their wages to greedy landlords unless urgent action is taken to break their power.

Predictably there is a mental health crisis among young people, 48% of people aged 22 years old placed themselves in the “low mood” range according to a new study, an increase from between 25-30% before the pandemic. Ireland’s mental health services are unable to cope with the increase in requests from support, leaving young people to further question whether the uncaring capitalist system was designed with their well being in mind.

The response of the state to the recent jobs crisis has been to prop up the private sector with money that is borrowed from the profiteers on the international markets. According to the logic of capitalism this is money that will have to be paid back in the form of a new austerity programme, but we cannot accept this. We need to tax the wealth of the super-rich and tax avoiding big businesses, and invest in the state directly creating jobs. For example, through public works programmes to build public homes on public land, as well as hospitals, schools and expanding public transport. It means employing childcare workers on proper wages and conditions to provide free childcare for all. It means creating jobs to tackle the climate catastrophe we are faced with such as investment in renewable energy. These measures should be linked to providing training and education for all young people, and opening up third level education for all who wish to attend.

Young workers will not accept a repeat of the grim years of crippling austerity imposed by the right-wing parties in the aftermath of the 2008 financial crisis. The crisis facing young people today can only be overcome by a struggle to overthrow capitalism which thrives by perpetuating conflict between the working class, young and old. In order to ensure young people have a future, we must break with this death by a thousand cuts system by pointing to concrete proposals that will unite workers in the fight for a democratic socialist society that breaks with the rule of capitalism.