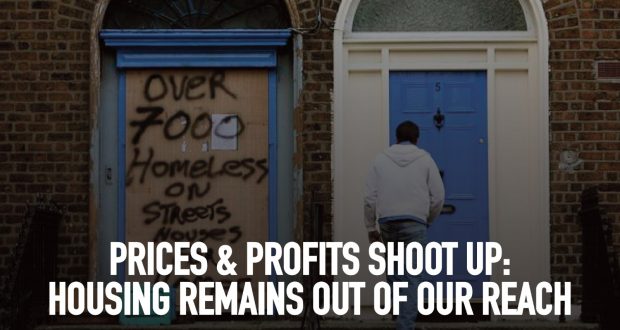 With low wages, precarity and the economic threat of Covid still looming, it is easy to see why there was public backlash to the new out-of-touch “affordable” housing scheme put forward by the government.

Proposals under the government’s scheme will cap the cost of an “affordable” home at €450,000 in Dublin City. With jobs, colleges, and services highly concentrated in Dublin City it is a necessity for many people to live in and around the location. An affordable home in South Dubin, Fingal, Cork and Galway cities, as well as Wicklow will be capped at €400k. These prices are unrealistic for working-class people. The average income in Ireland is €49,000 per annum.

However, if we really want to understand how much people in Ireland earn, we need to look at the median income which stands between €21,000 – €30,000. Last year, The Business Post analysed individual incomes and found that 60% of individuals have an income that is less than €30,000. This is the economic reality facing many workers and young people — buying a home, or getting mortgage approval, is not achievable for regular people and families.

Housing and the family unit

In the proposal it is said that a €450,000 home would be available to a couple with a joint income of €90,000. But what happens to single people who don’t have two incomes? Proposing homes solely to couples or families means that every individual who wants to buy a house must do so with a partner.  A woman online outlined the costs for a single person who wants to buy a home at €300,000. To start, you would need a €30,000 deposit. You would then need a salary of €77,00 to make up the remaining 90% based on three and a half times your income.  The details put forward by The Business Post highlight how this is unrealistic for most workers, especially single people with more than half of them earning less than half of the required salary.

The Irish State’s reliance on the private market to supply housing is a feature of Irish capitalism, and within that, of course, we will see the pushing of neoliberal ideology. The current housing model actually works to reinstate the idea of the nuclear family and doesn’t provide for alternative housing units for single people or single parent led families. The system wants working class people to be in competition for homes that are increasingly unaffordable and out of our reach, rather than provide what is a basic human necessity to all those who need it.

In the last week, the public has witnessed an American cuckoo vulture fund buying up 135 out of 170 homes in a new housing estate aimed at first-time buyers. The ability of vulture funds to buy up hoards of land and homes is having a detrimental effect on working-class people, but has been consciously kept in place by leading governments over the years. In addition to this, it was reported over the weekend that Housing Minister Darragh O’Brien had invested €30,000 into a global vulture fund, run by Standard Life Assurance. How can the position of Minister for Housing be appointed to someone who invested in the system that works to undermine access to housing? With one quarter of TDs being property investors or landlords and committed to defending housing provision for private profit – it is impossible to see how the parties of Irish capitalism can bring about the radical change that is needed.

Breaking with the system

The capitalist market is rooted in the private profits of vested interests and is unable to meet the needs of working-class people.  We need immediate action to ban vulture funds from buying up property and for their resources to be taken into public ownership, a slashing of rents to affordable levels, along with a programme for building public homes on public land for social and affordable housing. This will challenge the state’s economic housing model and the rule of landlords, developers and profiteers. To achieve this we need an organised grassroots movement of tenants, workers, and young people to demand an end to profiteering from housing provision and the necessary measures to end this crisis.