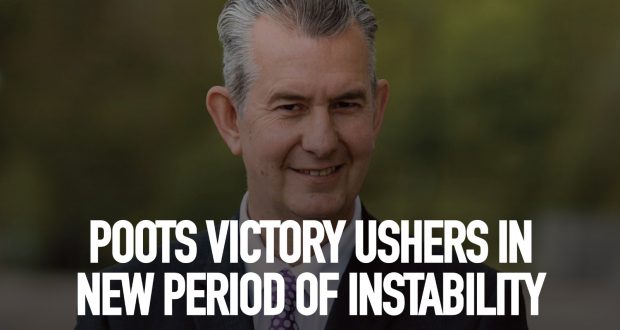 In the wake of Arlene Foster’s seemingly sudden resignation as DUP leader, Edwin Poots has narrowly defeated Jeffrey Donaldson in a leadership election, something unprecedented in the party’s history. Poots has indicated he intends to nominate Paul Givan as First Minister, rather than taking the position himself. There are now serious divisions within the party, as the hardline, Paisleyite wing again takes the helm.

The DUP was damaged by its leadership’s seeming acceptance – albeit reluctant – of the regulatory border in the Irish Sea, agreed by the Johnson government and EU, and its failure to ‘stand up’ to Sinn Féin over the Bobby Storey funeral. Foster’s failure to call for Michelle O’Neill to resign – focusing instead on Chief Constable Simon Byrne – was met with derision. An opinion poll showed a significant shift of support from the DUP to the more hardline Traditional Unionist Voice (TUV).

Poots and Givan are likely to engage in tougher tactics against the protocol, including potentially refusing to implement an Irish language act, previously agreed in the ‘New Decade, New Approach’ deal. Leading Orangeman Mervyn Gibson has said that the new DUP leadership should use “whatever means necessary” to end the Northern Ireland protocol which created the sea border, even “if it takes bringing down the Assembly”, something he criticised Foster for ruling out. Even Poots’ more ‘moderate’ opponent in the leadership election, Jeffrey Donaldson, likewise indicated he was prepared to collapse the institutions on this question, reflecting the depth of feeling on this issue within Unionism.

Many people rightly fear that Poots’ victory will mark a shift to an even more reactionary position on issues such a LGBTQ+ rights and abortion access. Poots spent tens of thousands of pounds in public money to keep the “gay blood ban”, while Givan has been to the forefront of the DUP’s attempts to roll back the right to choose. Both are young-earth creationists, who believe the earth is 6,000 years old, and Poots as environment minister has opposed the idea that we face a climate emergency. However, they will not have a free hand to implement their agenda, which would be hugely unpopular and provoke movements from below.

Real tensions between those who supported Donaldson and the Paisleyite leadership are likely to continue. Poots only won the nomination by 19 votes to 17 votes. Peter Robinson warned against a purge in the upper echelons of the party, reflective of a concern about the direction of the party after what journalists have described as a “peasant revolt” in its ranks. Donaldson’s candidacy was an attempt to have some continuity with Foster’s leadership, with a maintenance of a more pragmatic approach and a strategy “built on the politics of persuasion.”

Steve Aiken has also resigned as UUP leader, triggering an election. The political leadership of Unionism is in turmoil in the face of sometimes contradictory pressures – the pressure to make the Stormont institutions function, but also take a strong position in opposition to Sinn Féin and any threat to the union; the contradiction between political Unionism’s socially conservative core and the broadly progressive outlook of its target audience, particularly younger Protestants. But it would be wrong to confuse this for a crisis of Unionism itself. It still has the capacity to mobilise major support, especially when Protestants feel they are being pushed towards a united Ireland against their will.

‘Peace process’ faces crisis – but there is an alternative

This leadership change is part of a more profound change and the new era we are entering. The peace process has always been riddled with crisis, with the institutions collapsing on several occasions, with sectarian division – usually initially whipped up by the Orange and Green parties themselves – making power-sharing temporarily unworkable. However, we are now entering a period where the border and “constitutional question” are likely to become increasingly central. On these issues, there is no room for fudged deals, for the ‘creative ambiguity’ and agreements to disagree which have allowed power-sharing to stumble on in the past.

If the nationalist and Unionist parties are left unchallenged, the tendency will be towards increasing sectarian polarisation and tension in society. But there is an alternative – reflected in the movements of young people we have seen against racism, homophobia, misogyny and climate destruction; in the united struggles of workers from all backgrounds, against job losses, poverty pay and precarious conditions. These show the potential to build a movement based on the common interests of workers and young people, to challenge the sectarian carve-up and the capitalist system which breeds division, poverty and alienation. Everyone who wants to see this alternative built should join us today.