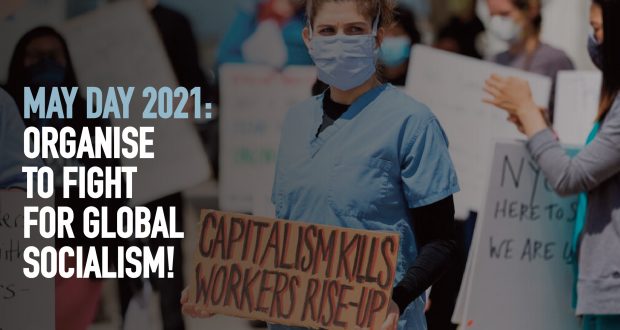 May Day 2021: Organise to fight for global socialism!

International Socialist Alternative would like to extend May Day greetings to all socialists, trade unionists and fighters against oppression and capitalism around the world. After over a year of devastating global crisis in which the activity of the labour movement was restricted in many countries by the Covid-19 pandemic, 1 May 2021 takes place in a particularly important context for the ongoing struggle against capitalism. Below we publish a declaration carried in the weekly paper of Rattvisepartiet Socialisterna (ISA in Sweden), which marks the occasion.

It was the Second Socialist International, which at its founding conference in 1889 decided to hold demonstrations the following year for an 8-hour working day.

For example as many as 40% of Copenhagen’s workers demonstrated. In Stockholm, 50,000 workers gathered at the demonstration meeting held at Gärdet and in London (where the demonstration took place on Sunday 4 May) up to 300,000 in London’s Hyde Park. After that, 1 May became a global day of struggle by workers and already in 1891, at its second congress, the Second International decided that the struggle for peace would be a theme of the upcoming 1 May demonstrations.

Today, the internationalism and workers’ solidarity that 1 May represents is more important than ever, that is why we urge: Organize, fight for global socialism!

The pandemic nightmare, caused by the plunder and predation of the capitalist system, exposed the catastrophic consequences of decades of neoliberalism and the race of global capitalism to the bottom. At a time when there is need for global action and coordination, capitalism withdraws to the nation state and government policies have become increasingly nationalistic, which, together with the pursuit of profit, sabotages infection control, vaccine production and distribution.

This crisis has become epoch-changing. Fearing an economic crash such as the 1930s and social revolts, governments were forced to abandon austerity policies and instead start spending on an unprecedented scale in peacetime. Even the Swedish government, one of the EU’s austerity fundamentalists, was forced to abandon the neoliberal budget rules that for decades had a constitutional character.

These massive support efforts prevented the global economic collapse from becoming double-digit on a global scale. But as the UN agency UNCTAD points out in its report (Out of the frying pan … into the fire?, March 2021) under the heading “2020: Annus horribilis”: “The loss of global output in 2020 with respect to the pre-pandemic trend meant destruction of income on an unprecedented scale, an estimated 5.8 trillion dollars, and with already vulnerable parts of the population bearing the brunt, at a time when better income distribution had become most urgent. This loss will persist as even the most optimistic projections for the bounce back of growth will not cover the shortfall of income for several years. ” The world has never been so unequal as it is today and rotting capitalism is becoming increasingly parasitic.

At the same time, the year 2020 sent an eerie warning that the world is rapidly approaching a temperature increase that exceeds 2 degrees above pre-industrial levels. 2020 was one of the three warmest years on record and the temporarily reduced greenhouse gas emissions during lockdown had no noticeable effect on CO2 concentrations in the atmosphere and this year the emissions will increase again (by 5 percent according to the IEA).

“Not enough, but the best we can accomplish,” was US Climate Envoy John Kerry’s summary of last week’s climate summit hosted by the Biden Administration. Kerry’s statement and the outcome of the summit were further proof that with capitalism and its governments in the driving seat, the world is being taken towards a catastrophe.

The climate and environmental crisis demands a socialist response. It is capitalism and its exploitation of humans, nature and animals that stand in the way of embarking on the transition that is only becoming more urgent.

In the mass struggles which are taking place — which tend to become increasingly global, as with the revolts in 2019 and since — together with the climate struggle and the wave of feminist and anti-racist struggles, we see the seeds of a new consciousness and prospect of a socialist renewal of the labor movement. To change the system and win, the struggle an organization that bases itself on the movement’s numerical strength and also the necessary political program.

Together with others, ISA wants to build a socialist mass movement that has the power and strength to abolish capitalism and its oppression and plunder. Or as Karl Marx and Friedrich Engels wrote in the 1848 Communist Manifesto published by the first international, socialist workers’ organization (the Communist League), whose message runs like a thread through 1 May : “The proletarians have nothing to lose but their chains. They have a world to win.Workers of All Countries, Unite!”