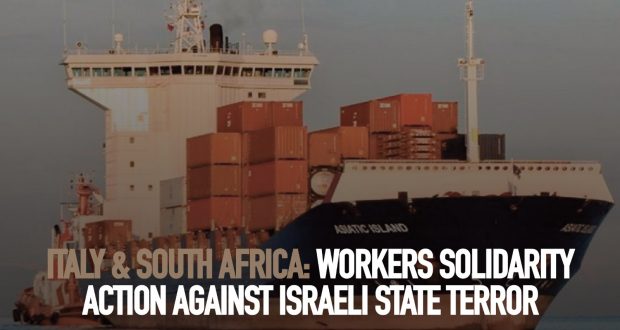 By Giuliano Brunetto, Resistenze Internazionali — our sister organisation in Italy

On 14 May, workers of the Autonomous Collective of Port Workers (CALP), members of the Usb base union, and the international association Weapon Watch learned that ‘high-precision bullets’ destined for the Israeli port of Ashdod had been loaded onto the ship ’Asiatic Island’.

The container ship ‘Asiatic Island’, flying the Singapore flag and coming from the port of Marseille, had left the port of Haifa in Israel on 6 May heading for Livorno. The “Asiatic Island” is a feeder ship, in maritime jargon a relatively small vessel, part of the scheduled service of ZIM, the Israeli state-owned shipping company.

CALP and Weapon Watch discovered that the loading of war material was carried out without the ship docking in port, as required by international safety regulations when loading dangerous or explosive goods.

CALP workers had already been involved in internationalist solidarity actions in recent months, organizing strikes and blockades against the loading of a Saudi ship loaded with heavy armaments for use in the war in Yemen. For this reason, many of them have been investigated by the public prosecutor’s office and are under indictment by the Italian authorities.

Upon receiving the news of the Asiatic Island’s arrival, CALP dockers immediately alerted their colleagues in the port of Livorno, where the ship was bound for supplies.

The Livorno colleagues, trade union delegates of Usb, some of whom are members of the anti-capitalist organisation Potere al Popolo, spread the news in the city and promptly alerted the Port Authority and the Harbour Master’s Office, asking for urgent checks on board the ship.

Manifesting a strong internationalist sentiment of solidarity against the war, they declared a one-day strike in solidarity with the Palestinian population and to demand an immediate end to the bombing of Gaza and an end to the expropriation of homes in the occupied territories.

Also in Naples, where the ship headed on 15 May, the dock workers clearly showed their solidarity with the Palestinian cause. The members of the SI Cobas union spoke out firmly ‘against the marshalling of weapons that serve to fuel wars and profits against the Palestinian people who have been suffering ruthless repression at the hands of Israel for years,’ declaring that ‘our hands will not be stained with blood for your wars.’

These initiatives by the dockers, which took place in conjunction with the large-scale mobilizations that crossed the country from Rome to Milan, from Naples to Turin in solidarity with the Palestinian people, had an important international prominence.

In South Africa, the trade union SATAWU organized a protest action against the loading of goods bound for Israel today, 21 May, referring explicitly to the communiqué written by the port workers of Livorno. In the port of Oakland, in the USA, activists and anti-war activists are mobilizing to prevent the loading of another ZIM ship which is due to dock in the next few days.

The initiatives of the Italian dockworkers represent a continuation of the best traditions of the working class, they go in the right direction and should therefore be supported decisively by all the forces of the political left, trade unions and associations in Italy and around the world.

International Socialist Alternative, convinced as it is that the working class is the only force in society capable of stopping wars, massacres and oppression, expresses its closeness and solidarity with the dockworkers who have once again demonstrated the potential strength of workers if they are organized and in contact with each other.

We will continue to support the internationalist initiatives of the brave Italian dockworkers who are showing the way to build real solidarity against the barbarity that capitalism produces all over the world. 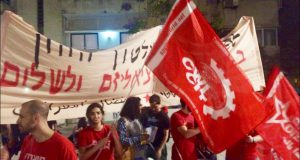