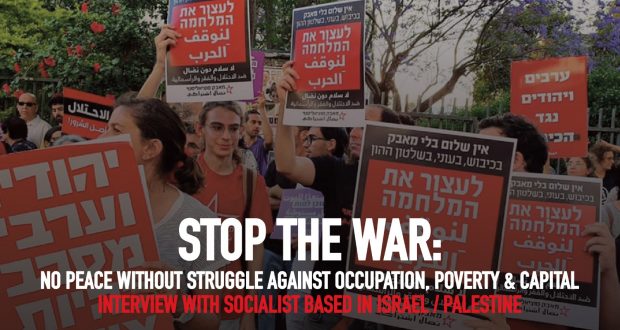 Provocations by the police and the far-right have led to a dangerous escalation leaving many dead and wounded. The war must be stopped. Peace can only be achieved by struggling against the occupation, poverty, and rule of capital.

An Interview with Yasha Marmer, Socialist Struggle — our sister organisation in Israel/Palestine.
By ISA (International Socialist Alternative- the Socialist Party is the Irish section of ISA) reporters

No peace is possible without a struggle against the occupation, poverty, and the rule of capital
The protests by Palestinian youth in occupied East Jerusalem, against colonial settlements and movement restrictions faced for several weeks police repression and far-right violence, and posed a major challenge for Netanyahu’s government, Biden’s foreign policy, and for the Arab regimes involved in the normalisation process. The situation has also put under stress the Israeli political system as it tries to forge a new coalition government with the far-right Naftali Bennet in the driving seat, involving both the Labor Party and the “left-wing” Meretz. Under the pressure of events, the United Arab List has already been forced to withdraw from negotiations. Of no less significance is the fact that the Palestinian authority elections have been postponed as the Faction in Fatah of the ruling President Mahmoud Abbas was fearful of losing the vote.

ISA: How would you describe the current situation?

YM: This is a war. The number of killed in Gaza is escalating rapidly. It is already 48, including 14 children. There are hundreds of wounded. Witnesses in Gaza say Israeli war planes attacked apartment buildings, and it has now been reported that a tower block has collapsed in flames. As attacks by the Israeli army continued, Hamas responded yesterday by firing hundreds of rockets into the south of Israel, killing two Israeli women. This means we are now entering a more prolonged military escalation. The Israeli army has announced the mobilisation of another 5000 soldiers. This would not be for a ground invasion now but for various support roles. This is a very worrying sign.

This originally started as Palestinians tried to resist settlers, who were trying to evict them from their homes in the Sheikh Jarrah region, but escalated as the Israeli forces tried to prevent Palestinians from gathering during Ramadan. The protests have had many progressive features, it started as a popular movement of youth against repression.

The Israeli ruling class was fearful that it could turned into a popular uprising at a time when there is a serious government crisis, the Covid crisis (although Israel claims a high vaccination rate, the Palestinian masses have been largely ignored), and serious concern across the Middle East as those regimes who have “normalised” their relations with Israel are facing repercussions at home. It is noticeable that the governments of both Morocco and Sudan who signed up late last year have so far remained silent. On Friday there was a mass demonstration in Amman, Jordan in solidarity with the Palestinian protesters.

There was a qualitative change in the situation when Hamas started to fire rockets into Israel. This was sized upon by Netanyahu government and the heads of the army to start the military attack on Gaza and regain initiative.

ISA: How did the situation escalate in this way?

This is the month of Ramadan. The police clearly did not want the youth to gather outside the Damascus gate of the old city, which is usually an area of night-time festivities for when Muslims break their daily fast. The youth opposed the police with demonstrations, and there were even clashes until the decision was overruled. This was a victory with some similarities to what happened in 2017. But it has not been enough to calm down the situation.

In East Jerusalem itself we have had hundreds of injured in the last couple of days and overnight, there were demonstrations and further clashes not just in the city itself but at various contact points, as well as in Ramallah in the occupied territories. There have also been demonstrations within Israel, mainly by Palestinians with Israeli citizenship. During the day, the demonstrations have grown in size, which is positive, the Israeli regime clearly fear them. In parallel there have also been attacks on police vehicles and on religious buildings — some of them linked to the far-right settlers. Although this was not simply indiscriminate nationalist violence against Israelis, that could develop in the few of days.

On the other side there is an attempt to organize strikes of Palestinian students with Israeli citizenship developing. That is also a new feature in the situation.

It is important to understand how this all came about. There had been a build-up in East Jerusalem during Ramadan with demonstrations on the streets, and in the mosques during prayers by Palestinians from occupied east Jerusalem, the West Bank and Palestinians with Israeli citizenship.

This is happening against the background of Trump leaving the scene. With Biden, it is obvious that Netanyahu will not receive the same kind of backing for all his provocative steps. Moreover, the Netanyahu government after the election is the weakest it has been for over ten years, while the Palestinian authority is weakened after the postponement of the election. This is important as there is much anger against the Palestinian authority, which claimed this was needed because the Israeli authorities would not allow voting in East Jerusalem. Some sections of the Palestinian youth reply that the authority has done nothing to organise, for example, the kind of elections there were in Catalonia, with the referendum and resistance. They could, youth argue, put ballot boxes inside schools or, in Jerusalem, in religious building with a struggle to protect the vote. But the Palestinian authorities have done nothing of this kind.

There is obviously anger, but also a strengthening of the youth, which see the Palestinian authority as just another control mechanism of the occupation. This is less so in Jerusalem as they are not allowed to be present, but in the West Bank, particularly in those areas where the Israeli army surrounds the towns, within those towns it is the Palestinian police who clamp down. But the postponement of the election has left the Palestinian Authority with much less authority. This is also an important feature, developing in parallel with the other processes.

ISA: What is the consciousness of those currently involved?

YM: This is the background to how the movement achieved its first victory when the restrictions implemented two weeks ago on the youth gathering at the gate were lifted. Resistance then moved to the Sheikh Jarrah neighborhood, which became the new point of resistance. The settlers there are very organised with state backing as they try to move Palestinian families out of their homes. The struggle has been going on there for many years, although demonstrations have, until recently, been very small — each with 20–50 people, half of them left-wing Jewish activists who have come in solidarity. But now, in the last week or so the picture has completely changed with the militant youth of East Jerusalem coming into the picture, but also with youth from other areas.

I have put a lot of effort into describing the movement that has been developing. Obviously now, in the past 48 hours, we are confronted with a military escalation. The effects of the intervention by Hamas incite the Israeli reaction and create a pretext to step up military action. But they will not end the demonstrations in the immediate term.

Solidarity with the struggle of Shiekh Jarah residents against the barbaric takeover of their homes by messianic settlers and the right-wing regime, who are trying to displace Palestinians living under the occupation of Israeli capitalist rule in East Jerusalem

End the entrance of Israeli armed forces to the Al Aqsa compound — stop the nationalist provocations and the attacks on worshipers’ rights that promote religious war. End the criminalization of Palestinian house construction in East Jerusalem, enough with house demolitions, with the occupation and the settlements.

There’s no peace without struggle against occupation, poverty, inequality, against corrupt elites and for healthcare, livelihoods and welfare for all. Yes to protests of Palestinians and Israelis, no to attacks on civilians

Only peace and equality will bring personal security for all — end all attacks and collective punishment on two million residents of Gaza. Solidarity with residents from both national communities in Israel that cope with indiscriminate rocket fire

End the occupation, no more denying the right for self-determination and national oppression of the Palestinians. For an independent socialist Palestine with its capital in East Jerusalem, for a socialist change in Israel and in the whole region 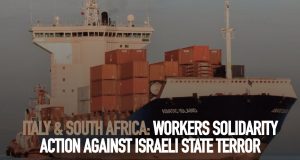